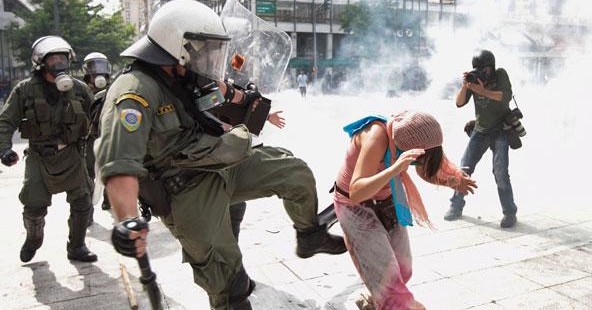 The Greek Tragedy Is All about Politics Now

Greeks in the streets, as they have been in the tens of thousands almost daily, have brought Europe’s debt crisis to a new and highly volatile stage. Austerity plans are political now, and there’s no stepping back from this truth.

There have been protests around Europe before last week’s sometimes-violent clashes in Athens. But nothing before these latest Greek demonstrations brings the point home so plainly: There are limits to the spending cuts and structural reforms that any government can impose without a clear display of shared sacrifice.

Immediately at issue in the Greek crisis is a €12 billion ($17.2 billion) tranche of funds from the European Union that Greece needs by next month if it is to avoid a calamitous default. This is part of a €110 billion rescue package Prime Minister George Papandreou negotiated with the EU and the International Monetary Fund last year. In Athens this week, Papandreou has to get a fractious, tippy ship of state behind his promised reforms as he negotiates not only his next installment but a new rescue package worth an additional €100 billion

It can work, although as of Tuesday morning European finance ministers were still trying to negotiate specific bailout terms. No one on either side sees any benefit in a Greek default. But the key to success now is winning sufficient faith from the Greek people that they are not bearing the full burden of a crisis they did not create while lenders elsewhere reap large benefits from it by way of handsomely high returns.

“Anyone who has gone into Greek securities over the past two years has enjoyed high-risk premiums,” says Alfred Steinherr, chief European economist for the Globalist Research Center. “It seems obvious now that they should share the responsibilities.”

To their credit, German Chancellor Angela Merkel and her finance minister, Wolfgang Shäuble, held out until last weekend for a plan that would have required private-sector bondholders to accept a debt-restructuring plan with extended maturity dates. But late Friday, Merkel and French President Nicholas Sarkozy announced a compromise that makes the participation of banks and private bondholders voluntary.

It’s unfortunate: Greece must now count on the consciences of its creditors, who do not traditionally enjoy much of a reputation for moral rectitude in such matters. But a taboo has nonetheless been broken, as Steinherr puts it: It is finally acknowledged that Greece cannot repay its debts, which equal 150 percent of its GDP, on time. Rescheduling is now part of the conversation.

The Franco–German compromise instantly eased tensions in the hyper-ventilating financial markets. And it seems all but certain that European finance ministers will approve the quarterly installment of last year’s loan agreement before Greece runs out of money in mid–July, despite their failure to do so on Monday.

But what about the longer-term solution to Greece’s crisis (and that of Portugal, Spain, Italy, and Ireland)? How is Papandreou supposed to keep his citizens from carrying clubs in the streets?

Several smart ideas are now up for discussion among European officials, economists, and market analysts:

•Give Greece more time to execute its reforms. Papandreou has already taken the most drastic steps of any nation in Europe in freezing wages, cutting public employment and pensions, and trying to get control over a haphazard tax system. To finish these reforms and pursue still more of them—including the privatization of some $71 billion worth ofstate assets —Athens needs 5 to 10 years. This means debt maturities have to be lengthened the same amount of time and interest rates lowered so Greece can borrow at costs that look less like credit-card usury. Late last week the yields on two-year Greek government bonds reached a record of just under 30 percent.

• Increase the flow of public funds from Europe. In Marshall Plan style, the E.U. could cancel up to $50 billion in debt and get Athens the rest of what it needs via bridge loans and other credits. Alternatively, the European Central Bank could structure a per-capita distribution of newly issued bank funds to all EU members. Germany would be the biggest beneficiary, given its population, but such a move would limit the potential for contagion elsewhere by allowing Greece and other ailing nations to get their debt-to-GDP ratios down such that they could borrow in private markets.

• Multiply the ECB’s available bailout funds by two, from the €750 billion allocated last year to €1.5 trillion. This thought was advanced late last week by Nout Wellink, Holland’s central bank governor. It’s a question, he said, of the rest of Europe defending one of its members.

“The problem with the ECB is that its approach so far has been all stick, no carrot” says Marshall Auerback, a global strategist at Madison Street Partners in Denver. “What Greeks see is a covert bank bailout, and it’s neither politically nor economically sustainable.”

Poor salesmanship, true enough, has been among Europe’s failings since crisis situations began to emerge around Europe two years ago. As things stand now, it indeed looks from the Greek perspective as if all Europe wants is to protect its profits on the nation’s debt.

More fundamentally, Greece has revealed several fault lines in the E.U.’s operations. For one thing, there is no leadership structure to match the monetary union; we now know you cannot manage a common currency without common political leadership. For another, the E.U. has long measured success by way of its membership count, without considering differences between the north and west of the Continent and its eastern and southern flanks. “My personal thinking is that Greece should not have been admitted into the monetary union in the first place,” Steinherr says.

There’s one final point to consider as things speed along on the other side of the Atlantic, because it’s a point worth thinking about on the American side, too. Will the degree of austerity that hobbling European economies are now asked to accept turn out to be the smartest way at the problem? The last time Western nations entertained such an obsession with liquidating debt and deficits was in the early 1930s, and what followed came to be called the Great Depression.

← The ‘Arab Spring’ Can Help Cut Defense Spending
Kissinger’s Skilled Eye on China, Then and Now →