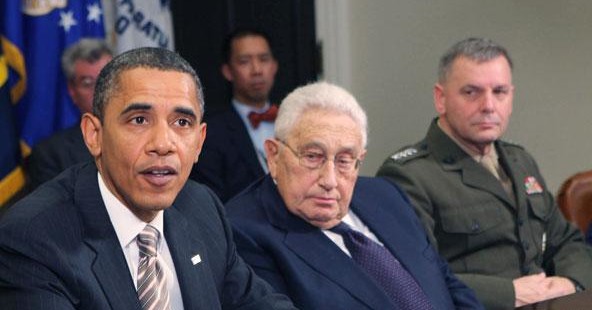 Kissinger’s Skilled Eye on China, Then and Now

Nearing age 90 now, Henry Kissinger has set down in a new book his extraordinary challenge four decades ago, when he brought together Mao Tse-tung, the giant of the peasant revolution, with the dedicated anti-Communist,Richard M. Nixon.  On China (Penguin Press, $36), whatever else it purports to be, is at its core the former secretary of state’s reflections on the most imaginative and elegantly fashioned diplomatic initiative of his career – and of his time.

Kissinger explains the China he found when he began the spadework for Nixon’s visit in February 1972. This was an important project, for the past is ever-present in  the Chinese consciousness. The focus, as might be expected, is on the different styles and methods of leadership and diplomacy between East and West: The Western preferred frontal assault and total victory; China brought two millennia of practice in indirection, patient encirclement, and carefully attenuated compromise. “No other country can claim so long a continuous civilization,” Kissinger writes, “or such an intimate link to its ancient past and classical principles of strategy and statesmanship.”

The historical line Kissinger traces after establishing what he calls China’s “singularity” runs through the 18th and 19th century arrival of Western legations, the Opium Wars of the early 1840s, the decline, confusion, and eventual collapse in 1911 of the Qing (the last imperial dynasty), and the subsequent turmoil that opened the way to the Chinese Communist Party and eventually Mao’s arrival in Beijing in 1949. After that, the book reveals itself ever more as a preamble to Kissinger’s entrance in Mao’s later years.

Envoy, Negotiator, Strategist
Throughout, Kissinger displays a diplomat’s appreciation for the sophistication that arose from China’s many centuries of dealing with others as the “Middle Kingdom.” On China is unmistakably the work of an envoy, negotiator, and strategist. “In navigating the treacherous passage of assaults by the Western European nations with their superior technology and the new ambitions of Russia and Japan,” Kissinger writes in a typical passage, “China was well-served by its cultural cohesion and the extraordinary skill of its diplomats.”

That said, Kissinger’s appreciation of history has its limitations. Mao, for example, is portrayed as founder of a new dynasty. Well, yes and no. Mao drew on the past, but surreptitiously. We now know he read the classics in the evening, but in public he repudiated the Confucian ethos as one of the “four olds” — a chain around China’s neck.

Even in his field of primary interest — strategic diplomacy — Kissinger comes across as other than a scholarly historian. He is too mild in his account of the Opium Wars and the naked thrust of 19th century imperialism they reflected. Equally, Kissinger seems to miss the powerful psychological impact of the West’s arrival in the Middle Kingdom. The shock of discovering that their country was no longer the middle of anything is one the Chinese are still trying to overcome, and no comprehensive accounting of China as we know it can leave this out.

The Nixon Visit
The heart of On China lies in the chapters concerning the Nixon visit. Here the tone changes to something closer to memoir or reminiscence, lending the text a new liveliness. The detail is first hand and Kissinger’s eye for diplomatic subtlety is evident. “We soon discovered that our Chinese hosts had designed an almost improbably leisurely schedule,” he writes of his initial (and secret) visit in July 1971, “as if to signal that after surviving more than two decades of isolation, they were in no particular hurry to conclude a substantive agreement.” Subsequently, Kissinger renders vivid portraits of Zhou Enlai, Mao’s famed foreign minister, and of the Helmsman himself.

It is tempting to conclude that On China is intended to use two and a half millennia of Chinese history as the gold setting for the Nixon-Kissinger demarche. But then we come to a note of unexpected modesty. “That China and the United States would find a way to come together was inevitable given the necessities of the time,” he writes. “It would have happened sooner or later.”

It’s an extraordinary observation from a diplomat known, somewhat, for his vanity. And one is not so sure about it in any case. What we now call the Nixon-in-China effect — a conservative rather than a liberal crossing the ideological lines —surely helped  the Nixon White House sell the China gambit at home, where “Who lost China?” was still considered a legitimate Cold War question.

On China ends with Kissinger’s reflections on the future of ties across the Pacific. The breakthrough he structured rested on a common foe and shared geo-political interests. Neither now exists as it did, and Kissinger sees a comprehensive framework for Sino-American relations as a task still in need of completion. He sees the evolution of a “Pacific community” based on “parallel national aspirations” and “consultation and mutual respect.” It’s an optimistic view, as these spongy phrases suggest. We aren’t there yet, in any case. And one has to wonder why, 40 years after the Nixon-Kissinger initiative and with an extensive economic interdependence in place, angst and suspicion remain so much a part of the thinking on both sides of the ocean.