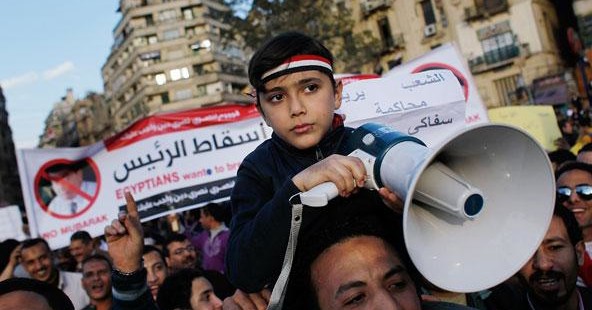 If we want to bring our unconscionably wasteful defense spending under control, the place to start is with a fundamentally re-imagined foreign policy that does not require a trillion-dollar military.

President Obama’s recent pledge of $2 billion in response to the “Arab Spring” uprisings is taxi fare compared with the U.S. defense budget. (It’s also a puny fraction of the $40 billion the Group of 8 promised the Middle East’s emerging democracies when it met in France recently.) But it is smart money well spent and may be evidence that a White House groping for some kind of “Obama Doctrine” is finally finding its footing.

Obama has proven to be a hard read: He is the liberal internationalist who keeps Guantánamo open and caves to the Pentagon at every turn. But his small gesture toward the Middle East’s nascent democracies signals an opportunity for him to leave a meaningful mark. If Obama can begin to redefine U.S. foreign policy goals, Washington can put significant cutbacks in defense spending seriously on the table for the first time in 65 years.

The connection between foreign policy and a defense budget that came to $687 billion last year is essential. The U.S. now has more than 300,000 troops deployed in nearly 200 bases and installations overseas. Defense spending has risen 81 percent since 2001, and military operations in Afghanistan alone consume almost $7 billion a month. As a TFT graphic demonstrated after the killing of Osama bin Laden, homeland security has cost Americans $1.1 trillion since the 9/11 attacks.

Plainly, what the U.S. spends reflects what the U.S. is trying to do—its foreign policy objectives. The truth of this equation is that you cannot reduce the defense outlays significantly unless you rethink the intentions.

The magazine Foreign Policy recently looked at defense spending and identified $280 billion in savings straight off the top of the current budget. “The place to start reducing defense spending is with U.S. overseas commitments,” writes Douglas MacGregor, a retired colonel. “Why does America need all these facilities? What better time than now, when the United States faces fiscal calamity but few real military threats, to judiciously sort those that are truly needed from those the Pentagon can live without? It’s time to declare victory and go home.”

MacGregor poses good questions. But coming home requires more than a technocratic examination of weapons systems, troop configurations, and the like. We have to look deeper down to make real progress in reining in runaway defense and security costs.

Washington‘s foreign policy must evolve from the goals Woodrow Wilson set down when he defined what came to be called the American Century. America’s century in the sun, bursting with Wilsonian idealism, was all about “making the world safe for democracy,” as the scholarly president declared our national mission.

When the Cold War brought new concerns, notably global stability in the context of prolonged East-West rivalry, what is commonly called neo-Wilsonian idealism emerged. To put a complex matter briefly, this meant making the world safe for American democracy: If you wanted to ally with the U.S., you had to do things just as the U.S. did them. Neo-Wilsonianism has been the source of much anti-Americanism and is among the root causes of our defense burdens.

Obama’s big chance is to begin an advance toward post-Wilsonian idealism. Yes, democracy must be encouraged at every opportunity. But in each case those achieving democratic government should be left to decide for themselves what form it takes. “There are as many varieties of capitalism as Heinz has pickles,” an economist named Hy Minsky famously observed in the 1960s. Post-Wilsonian democracy should be brined in the pickle principle.

You could not ask for a better place to put post-Wilsonian democracy to the test than the Middle East, because democracies emerging from the Arab Spring will arise out of the Islamic tradition. It is commonly argued that Islam and democracy are incompatible, but this is yesterday’s perspective. Middle Eastern democracies will simply look different: The separation of religion from the state will be blurred and may appear strange to Westerners; the role of the state in the economy and everyday life may be more prominent.

The G-8 made it plain that its pledge of substantial support for post-dictatorship nations in the Middle East—and it was careful not to define its promises too specifically—would be conditional on certain reforms. Already we see the potential for progress ahead but also problems:

• On one hand, G–8 leaders indicated that they would insist on social and political reforms such as moves toward greater transparency. This is a wise stipulation in the interest of a universal value. (

, one of the planet’s best-managed NGOs, is dedicated to it.)

• On the other hand, officials said the industrialized economies plus Russia would also insist on development policies based on private-sector initiatives. This reflects strong beliefs prevalent in G-8 nations, but it is neo-Wilsonian, not post-Wilsonian, to require them. What if Middle Eastern electorates want to follow a sort of Nordic model, one form or another of social democracy, because they think their level of development requires it? Would this be a cause to withhold the generous hand extended in the name of a safer, stabler world?

One noteworthy feature of the Middle East uprisings this spring was the absence of animosity toward the U.S. despite its support for numerous hard-line rulers during the Cold War decades and since. The focus was on local issues—corruption, civil rights, democratic institutions. The contrast is in Afghanistan, where there will be no similar movement: So long as U.S. and allied troops are there, resistance will be all about getting the foreigners out.

The “war on terror”—a term Americans alone accept any longer—has been self-perpetuating as well as egregiously expensive. (And it was never a war so much as a set of intrusive policy goals, at home and abroad.) When the Obama administration begins writing its modest checks to a new generation of Middle Eastern leaders, it should consider that $2 billion spent on a renovated foreign policy could soon enough save the U.S. multiples of that amount in the defense costs that now overburden Americans.