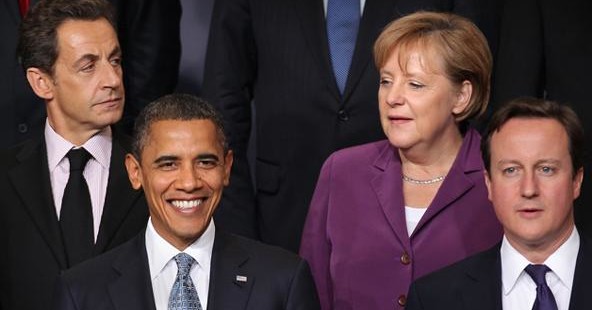 The recent news from Germany is encouraging for Europe—and sobering for the U.S. Beating all forecasts, unemployment has plunged to its lowest level in nearly 20 years. Business and consumer confidence is hitting records.

It is getting hard to flinch from the bitter conclusion: Relative to other developed countries, the U.S. is flubbing a credible recovery from the 2008 financial crisis and the fiscal mess it landed us in. While Americans wonder if Washington will shut down or just keep quarreling, comparable economies are moving briskly along with what the International Monetary Fund calls “exit strategies.”

One economist, an analyst with a multilateral institution and no partisan ax to grind, suggests we can measure the time Americans have already lost finding a way forward if we take as a starting point President Obama’s commitment to halve the budget deficit by 2013. That fencepost was planted at the G-20 meeting in Toronto last June.

“The U.S. has lost about a year,” he says. “And as time goes on and the deficit keeps growing, it’s that much harder to reach any goals Washington may eventually have.”

The name of the game for advanced economies now is to phase out post-crisis stimulus spending and start achieving targets for fiscal consolidation.

Last week, Ben Bernanke appeared at House and Senate hearings and said in so many words: yes, somewhere out there in the middle distance we’ll start to cut stimulus spending and begin the long march back to fiscal balance.

The Fed Chairman had few specifics, naturally, given the sluggish U.S. economy and persistently high unemployment. But judging by Bernanke’s remarks, the bickering in Washington will have cost us two years by the time we get on the same path as the large European economies.

Everyone took a hit after the 2008 meltdown, of course. But a few numbers provided recently by the IMF give us an interesting measure of just who got on their bikes afterward and started pedaling–and who took the occasion to launch unproductive ideological crusades that paralyzed the policy process.

Gross government debt (which includes states and municipalities) presents another comparison. U.S. debt will be close to100 percent of GDP this year and will keep on rising until at least 2015, when the debt-to-GDP ratio is forecast to reach about 110 percent. Germany’s and France’s debt, already at healthier levels, will rise incrementally this year and start dropping in 2012 and 2013 respectively.

This, in pencil-sketch form, is a landscape of the ground Americans have lost as our political conversation has deteriorated into a shouting match. Capitol Hill has managed to turn a crisis requiring a technocratic solution into a standoff over “the American way,” and we can now start to measure the cost in time.

Not everyone agrees with this analysis. The German economy had a weaker-than-expected fourth quarter, and there are those who insist this is a sign that Germany’s post-stimulus tightening, which began in mid–2010, was premature.

“Germany choked off a slow recovery,” says Robert J. Shapiro, chairman of Sonecon, an economic advisory firm, and undersecretary of commerce during the Clinton administration. “We’ll see what happens in the year to come.” Weak quarter or no, the German economy expanded on a year-to-year basis by 4 percent in the last three months of 2010.

Germany and France took different approaches to their fiscal crises. France “front-loaded” its strategy, putting big spending cuts and revenue increases at the start of the process. Credibility is one of the advantages to this way of attacking the problem: The markets assume you are serious.

The U.S. is supposedly following Germany’s approach, although there is a glaring credibility deficit at this point. Without much to point to by way of a record, Washington proposes to spread the fiscal-adjustment process out at least as far as 2015, and at this point no one can be certain when after that adjustment period will draw to a close.

What about the $61 billion in cuts the Republicans in Congress put on the table? Isn’t this a serious display of commitment right at the start?

It’s a big number, but it only makes matters worse. The Obama administration was forced by pressure from Capitol Hill to under-stimulate in response to the crisis: The administration’s “quantitative easing” was sensible strategy, but the extension of tax cutsto the well-to-do compromised it, and the deficit projections show it. Now conservatives in Congress want to over-tighten. Politics is crowding out sound, systematic thinking.

“You’re not going to solve any problems
by dropping public TV, so there’s
a lot of unease about Washington’s
ability to deliver on anything at this point.”
The $61 billion idea does little, in any case, to address the segments of the budget—health care first among them—that will make any substantive difference to the fiscal position.  Equally, the thought that any such amount can be cut from discretionary programs only adds to the impression that the process is now controlled by reckless budget slashers primping as heroes for the folks back home.

“It’s well beyond what the U.S. has accomplished ever before,” that nonpartisan economist says. “You’re not going to solve any problems by dropping public TV, so there’s a lot of unease here about Washington’s ability to deliver on anything at this point.”

Two years is a lot of time to devote to dithering, especially now that we can measure ourselves against others. Americans will still be in one degree or another of agony even as those social democracies that aren’t supposed to work will have put this crisis behind them.