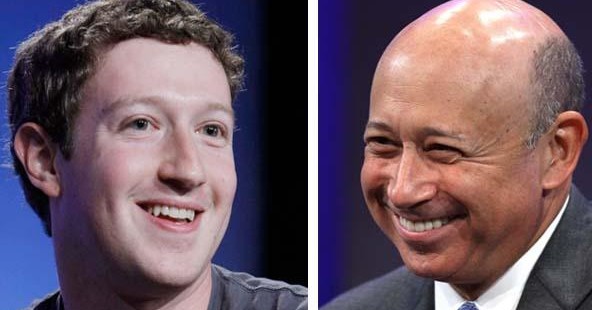 Have you received your invitation to invest in Facebook, the not-yet-listed social-networking phenom that has burst onto Wall Street with the excitement of a dot.com company a dozen years ago?

I haven’t got mine, either. They must be in the mail.

Goldman Sachs, on the other hand, has just cut a deal to buy up to $2 billion worth of Facebook stock. Some of this is for Goldman’s book, but three-quarters of it will get sold to Goldman partners (fair) and a select group of the firm’s friends (not so fair). The details of this transaction have not been made public because Goldman has set up a special purpose vehicle, portraying itself as a single investor protected by a privacy protection firewall.

So much for transparency and the new 39-step self-improvement program Goldman Sachs announced today to enhance their public image and show good faith with financial regulators. Goldman’s Gerald Corrigan told The Financial Times, “There is a strong consensus by the board that the senior management team did a pretty good job of managing through the [financial] crisis,” Mr. Corrigan said. “The more important thing is that it was Lloyd [Blankfein]… who took the initiative to proceed with this aggressive process of self improvement.”

The company’s 39 steps (no intended reference to the Hitchcock classic ) apparently did not answer these conundrums: When is a public offering not a public offering—and so not subject to the Securities & Exchange Commission’s disclosure rules? When is a mutual fund—which Goldman is effectively creating with its Facebook investment—not a mutual fund? When is a market—which Goldman will make once the in-crowd investors start trading among themselves—not a market?

The SEC is taking a chance if it does let this deal go through, as Bhidé and other students of the market anticipate. Given the rewards, it could well become the template for other social network transactions—and, not unthinkably, the making of another tech bubble. The essence of it is the price: The bargain Goldman’s investors are getting will be obvious as the frisson of fascination surrounding Facebook builds.

When the IPO comes—and most observers expect it within six months, never mind Facebook’s coy denials—the price could well be the highest the stock ever reaches. That’s how the party works: The public comes in not at the beginning, but at the beginning of the end.

You can’t get far talking about the undemocratic nature of this kind of deal, or the ever-more-sequestered nature of American wealth. That reeks of what the French callangélisme—the impossible ideals of Girl Scouts. But from a public policy perspective, the current Financial Regulation bill, already watered down to a simple inconvenience for Wall Street rather than fundamental reform, will not prevent companies such as Goldman Sachs from operating within their own rarified world of fuzzy rules and huge dollar investment requirements.

“Always within the letter, rarely within the spirit,” says a Boston analyst on the private-wealth side of a large investment house. “Regulate however you want. I’ll simply find another way to make my money. In the end regulation comes to red tape, forms and an annoyance—and not much more.” Bhidé agrees: “You probably couldn’t have said that twenty years ago. It’s a symptom of [SEC] overreach on one hand and having too much to do on the other.”

Goldman is certain to manage the IPO
and it has handily benchmarked the price
at which Facebook will finally come
to you and me.
The rules the SEC is supposed to enforce are outdated and can’t account for billion-dollar deals with multitudes of high-end investors piling into global trades on bloaty internet stocks. Understaffing is also evident.

The SEC hasn’t commented on the Goldman/Facebook deal, though it has launched an inquiry into the practice of clustering investors. Goldman now owns about one percent of Facebook; it will reap a private-placement fee from Facebook and more fees from investors in the $1.5 billion block it’s buying; it is certain to manage the IPO and it has handily benchmarked the price at which Facebook will finally come to you and me.

← A Near Perfect Spy Novelist
The Deficit: Congress Fiddles as America Loses Ground →