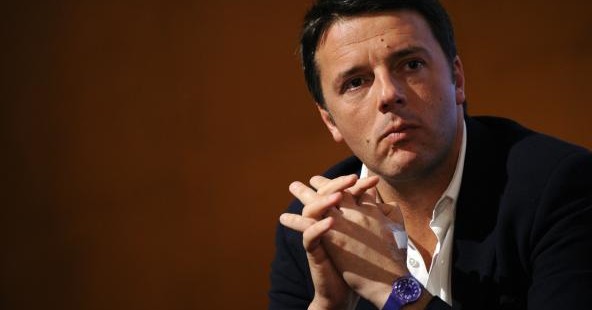 Renzi, Italy’s Man of the Moment, Has a Lot to Prove

Sometime this week or next, if all goes to plan, 39–year–old Matteo Renzi will become the youngest prime minister in Italian history. He will form the nation’s 62nd government since 1945 and the fourth since its descent into crisis in 2009.

You need a small stadium to seat Italy’s population of postwar prime ministers. But this change of the guard is to be watched closely. Renzi could demonstrate “what it takes,” to get Italy out of trouble (to borrow from European Central Bank president Mario Draghi). But we are more likely to learn what is missing in all of Europe’s repeated efforts to recover from its post–2008 blights.

Italians think they have found someone big in Renzi, who has served as the mayor of Florence since 2009. In American politics 100 years ago, he would have been a “new broom.” In Italy he is “the demolisher” because he promises to blast open a famously encrusted political culture as if he were the lead in a special-effects film.

Renzi is the one to take Italy decisively out of economic, social, and political peril and pain, Italians seem to have decided—“seem” because Renzi has not run in a national election, just as the outgoing Enrico Letta did not (and just as Mario Monti, Letta’s high-priest technocrat predecessor, did not).

But the room for doubt on this point is simply too large to ignore.

Letta’s resignation late last week and Renzi’s lightning-fast rise reflected a quiet coup within the party they share, the left-ish Democrats. And the markets responded with an equanimity the chattering class found re-assuring: The FTSE Eurofirst 300 index gained 2.4 percent on the week.

This is in keeping with a mist of euphoria that now envelops investors. Lately they have been busy responding to better-than-expected GDP numbers in the eurozone for 2103. Italy grew (0.1 percent) for the first time since 2011. The Bank of England asserted that the UK economy would surge this year at a rate of 3.4 percent—vaulting past South Korea, Taiwan, Brazil, and other proven performers.

Equally, the sell-off in emerging markets—$24 billion over the past eight months—has flipped, persuading investment managers that it was all an overreaction; they can see bottom now, and it is time to jump in. Morgan Stanley’s emerging markets index, the MSCI EM, has bounced 3.3 percent since February 4.

In a literal sense, this is a disconnect. Emerging markets investors fly partly on the assumption that political environments have nothing to do with economic prospects. It is wrong. See Ukraine, see Argentina—see China, indeed.

It is the same in Italy and elsewhere among Europe’s ailing economies. What we have watched for years are attempts to implement technocratic solutions to crises without democratic reference to the voters’ preferences. Einstein’s definition of insanity—doing the same thing incessantly and expecting a new result—applies.

Consider the word “reform” as commonly used in Europe and as Renzi’s people use it now. Reforms leading to recovery are inherently political. What kind of reforms leading to what kind of recovery, benefiting whom and how? Europeans flinch from these questions and try to get by on the notion that technocratically conceived reforms lie beyond question. They do not. Technocrats can be smart; they are less often responsive political beings.

This is Renzi’s gambit. It starts to look as if the political elite—of which Renzi is a card-carrying member—do not want to ask voters what they want because they are afraid of the answers.

Berlusconi’s time-wasting irresponsibility does not justify fudging around the political process. It assigns Italian politicians the duty of developing imaginative solutions matching citizens’ demands with sustainable policies. To take cover with the technocrats is to argue this is impossible—a form of fatalism and a judgment on democracy.

The Letta–Renzi duet was as neat as a traffic-light change. Giorgio Napolitano, the head of state, made clear as he prepared to ask Renzi to name a new government that calling elections was to be avoided at nearly any cost.

The rest of Europe assents. The prevailing line is that the ECB’s bond-buying operations, which enabled Italy to avoid a full-dress bailout, have allowed Italians to carry on with their usual political fractiousness. “I don’t think Italy can afford that,” Jeroen Dijsselbloem, the Dutch finance minister, said the other day. “I don’t think any country can afford that.”

Neither Italians nor other Europeans in trouble can afford to quarantine reform strategists from the political process any longer, if they are to find reforms that stick.

Renzi’s tasks are formidable. He is advertised as advanced as Italy’s Tony Blair, who swept aside “old Labor” adherents to traditional social-democratic thinking. Renzi’s Democrats are the rump remains of the PCI, “Peachy,” the Italian Communist Party. This end of Renzi’s job involves a change in political culture, as did Blair’s, and we will see how far he gets.

Other things are more pressing. With national debt of €2 trillion, $2.74 trillion, and unemployment at a record 12.7 percent (youth unemployment: 42 percent), how will he balance public-spending cuts, promised tax reductions, job creation, privatizations, and labor market reforms? He needs a parliamentary majority for these policies. Not surprisingly, there are already political delays in forming another fragile coalition to keep him in office.

Investors and Euro watchers now await Renzi’s imminent choice for finance minister: Will he pick a political figure or a technocrat? His choice will signal whether he intends to govern—let us be blunt—democratically or otherwise.

Easy enough to count Italy’s parade of prime ministers and then count the hands needed to do so. But its political blocage is most of Europe’s, too. No one articulates a persuasive vision of sustainable recovery because there are no ideas of a sustainable social contract—not yet anyway.

Perversely, a columnist can sometimes hope to be dead wrong. But I do not see Italy’s young man in a hurry filling his own Florentine loafers, let alone anyone else’s.

← The world is right to hate us: Arrogance, ignorance and obscene foreign policy
John Kerry’s policy of surrender: His failures are redefining American exceptionalism →