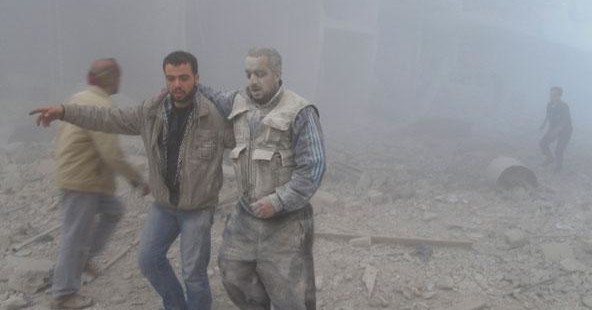 Obama’s Red Line in Syria Was Drawn in Pencil

Suddenly, the Syria crisis has grown more complicated for the US—and notably for the Obama administration. After many months of staying scrupulously clear of a conflict that has now claimed 80,000 Syrian lives, it looks as though the White House will soon have to come to a hardheaded decision as to what the U.S. is to do if President Bashar al–Assad has been using chemical weapons against the Syrian populace.

Allegations that Damascus is deploying sarin gas surfaced last summer. They hardened recently, but still the assertions were inconclusive. Now comes the potential bombshell. Over the weekend, Turkish Prime Minister Recep Tayyip disclosed that he has evidencethat Assad’s military has indeed been firing missiles laden with chemical weapons. Secretary of State John Kerry, who is not one to leap to alarmist conclusions, says he now sees “strong evidence” of the use of sarin.

President Obama made it clear on August 20, 2012 that if Syria’s President Assad used chemical weapons on the insurgents and their villages, he would be crossing a “red line” and would face “enormous consequences” from the United States.

That line seems to have been crossed, and it looks to many that Obama has moved the line back hoping to duck his threat through diplomatic negotiation. This is a dangerous position for Obama and U.S. foreign policy.  If Obama’s threat is not carried out, Iran and other hostile nations will assume Obama is shooting blanks.

Secretary of State John Kerry’s journey to Moscow has produced the most promising chance for peace talks
since the war against President Bashar al–Assad began two years ago. Over the weekend, Assad’s last big-power sponsor—Russia– agreed to cancel a key sale of ground-to-air missiles to Damascus.

It is hard to see a sensible place for America in this kind of ball game. As we ought to know from experience, an outcome in the Middle East can turn out to be grotesquely worse than the status quo. Know your enemy is the lesson to be taken. Just because the U.S. failed in cases such as Afghanistan does not mean it has to fail again.

It is clearer every day that there is a large, not to say dominant, sectarian dimension to the Syrian conflict, Shiite against Sunni. This is why Hezbollah has come over from Lebanon to support Assad, who is of the Alawites, a Shiite sect. It is why the Saudis (Wahhabist Sunnis) and Qatar are supporting the rebels against Assad. It is why Jahbat al–Nusra, which fields some of the best fighters in the opposition (and which is gaining recruits), turns out to identify with al–Qaeda.

What, then, is the American role in this mess? It is a great question at this moment. Post–Iraq and post–Afghanistan, the Syrian conflict was bound to face Washington with its biggest unknown since the Cold War ended. It’s not just “What do we do in Syria?” The issue has echoes, like a pebble cast in a pond. What do we do anywhere? What is America’s purpose in the post–Cold War world? In my view, we have managed only the fuzziest of answers to this.

George W. Bush’s two wars were waged as Cold War reruns: The same values applied. It is America’s duty to bring democracy and freedom everywhere it is absent. Bush’s speeches, and even more so those of Condoleezza Rice, his secretary of state, are filled with this kind of thinking. It is straight out of the eighteenth century: Providential nation, assigned to save humanity. Of course, Bush’s wars proved failures, primarily because Washington misread both the times and the societies.
Until recently, the interventionists on Syria seemed to be gaining the upper hand in Washington. Nobody has proposed putting US troops on the ground—Americans have no stomach for that after Bush’s wars. But arming the rebels opposing Assad, or creating a no-fly zone to block Syrian attack aircraft, have proven proposals with legs. As recently as last week, Senator Patrick Leahy, the Vermont Democrat, said on television that he was confident the US would eventually arm the rebels—“if we know the right people to get them,” which is a very large “if.”

Even a few days later Leahy’s prediction seems less a certainty. President Obama’s stubborn hesitance, frustrating to many, is now proving out. Up close, I suspect Obama’s understands that Kerry would get a deal in Moscow.

More broadly, the president recognizes that America’s global role is changing for the simple reason that the globe is changing. No one can fix everything everywhere.

Now Kerry has the backing of London and Paris as well as Moscow for new peace talks. These are to be based on a communiqué issued last June 30, outlining steps toward a transitional government in Damascus. Those steps were never taken, but Kerry and Lavrov appear to agree that the June 30 document should stand as the basis of new talks.

There are a few things to note in this list. One is an implicit acknowledgment that America’s worldly role is more limited than it was once thought to be and that it possesses no magic wand to dispense democracy wherever it is waved. Another is recognizing the pointlessness of backing any side or faction in a conflict that is highly complex and involves values, animosities, and political cultures far from our own.

Finally, and on the positive side, there is what the administration is doing, not just what is refraining from. It is an exercise in great power to draw nations to the table for the sake of peace in one of them. It is a great power that puts food, medicine, and other kinds of humanitarian aid on the ground while staying clear of the fight and recognizing that those aided will eventually go their own way.

No intervention is now the outlook until mid–June. That is when the Group of 8advanced nations will convene in Northern Ireland (of all places) and when Russian President Vladimir Putin anticipates private conversations with Obama. The timing of peace talks is sure to come up. There is no point in launching any great departure in policy at least until then.

Footnote: Israeli air attacks on Syria, conducted to disrupt the flow of missile-grade weaponry from Iran to Hezbollah via Syria, continue. But are they the wise course? Hezbollah’s leaders now pledge that Syria will provide the same arms Israel interdicted. And the US will be implicated as Assad invokes a conspiracy of Zionist and Western powers. Oddly, Israeli Prime Minister Benjamin Netanyahu finally seems to have something in common with Hezbollah. He and the Lebanese group both know a sectarian conflict when they see one, which explains why, even with fighter jets in the air, Netanyahu appears indifferent to the Assad regime and who finally triumphs in Syria. Israeli officials suggest that Netanyahu views Assad as the Syrian he knows; the others could be worse if they took Damascus.

← As Europe Turns Left, a Call to “Show Me the Money”
Has Britain Gone to Pieces Over Exiting the EU? →