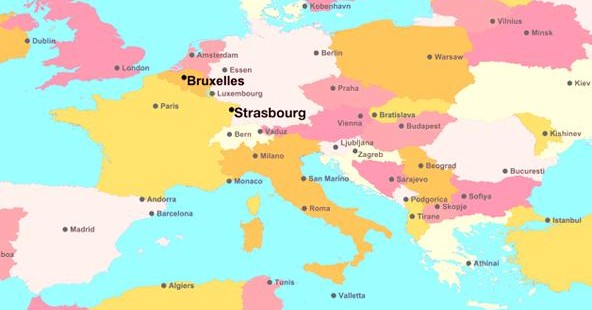 How the Debt Crisis Could Remake Europe

Maybe now we will all understand why the ancient adage “May you live in interesting times” was intended not as a blessing but as a curse. Last week wasmore than interesting in Europe: It was of historical importance—and bone-rattling in consequence. A crisis that seemed messy but contained in Greece suddenly spread to Italy—which has an economy six times the size of Greece’s. And it is perfectly plausible that Spain will be next to enter the sick bay.

Almost overnight, talk of contagion has spread. Every European nation in danger of contracting a case of fiscal crisis has now got one. We can’t talk any longer of an ailing periphery and a solid core among EU members: Lenders in the stronger countries are too exposed to the sick men of the Continent for such distinctions to be of any use.

This brings the 12 nations in the Eurozone to a moment of great decision, the biggest since the euro was launched a dozen years ago. Europe can go forward from here as one–or it can begin to come apart, letting a dream of unity nearly three-quarters of a century old recede like a tide.

Some commentators, notably Wolfgang Münchau of the Financial Times, think there’s a 50–50 chance that we are witnessing the beginning of the end of the euro. The political leadership in Europe has been too complacent since this fiscal crisis began two years ago, he reasons, and it is too late now to do anything effective about it.

But rather than a dissolution scenario, the opposite may be more likely.

There is too much invested in the Eurozone’s shared currency—across-the-board political investment, a common European identity, a progressive commitment to unity that dates to 1950, when Jean Monnet conceived of the European Coal and Steel Community—for this crisis to mark the moment Europe turns back. Yet there’s no standing still, either. The reality is that Europe now has to take an important step toward the “United States of Europe” that Joschka Fischer spoke persuasively of when he was Germany’s foreign minister under Gerhard Schröder in the late–1990s.

Italian Economy Minister Giulio Tremonti is one of many European leaders to make this point lately, and he made it best in an interview with The Wall Street Journal late last week, as Italy became the newest focus of jitters in the financial markets. “The historical function and trend of the European Union, by design, has always been convergence,” Tremonti argued. European capitals will overcome their differences, he said, “when everybody realizes the crisis, which already affects 40 percent of the Eurozone, is a common problem.”

EU leaders will have a chance to come to this realization when the European Council meets Thursday to discuss the Greek crisis. But the council will have to distinguish between long-term solutions to Europe’s current difficulties and immediate fixes that will buy time to explore the longer-term policy choices.

“To build the bridge between what to do now and what to do further out means that Europe needs Band Aids quickly,” says Srinivas Thiruvadanthai, an economist at the Jerome Levy Forecasting Center in Mount Kisco, N.Y. “If any of these short-term mechanisms fails—without the Band Aids—we are not that far from an uncontained depression.”

What are those short-term fixes? Four being actively discussed are:

Step back from these concepts for a moment. Each of them represents a move—a short-term, emergency measure—on the way to a longer-term solution to Europe’s crisis. Each implies an eventual advance toward a fiscal and political union among EU members that would make sense of the monetary union and supply the missing component of the European machine.

“The problem is that, unlike the U.S., the euro area is a monetary union but not a fiscal (particularly fiscal transfer) union,” Paul Sheard, an economist at Nomura Securities, wrote in his current Global Letter. “So at heart, the euro area faces a crisis of (economic and political) architecture, of which country fiscal crises and contagion are symptoms.”

Sheard added, interestingly, that “our core thesis remains that ‘Europe will work,’ in the sense that, under market pressure,
policymakers will take the necessary measures to bolster and evolve the architecture of the euro area.”

We will have to watch this Thursday’s meeting of the European Council carefully with this thought in mind. We know from more than half a century’s experience that architectural change of the kind it is now clear Europe needs comes slowly among EU members. But the alternative is for Italy to reissue the lira or Greece its drachma, and Europe has come too far to take that step backward.