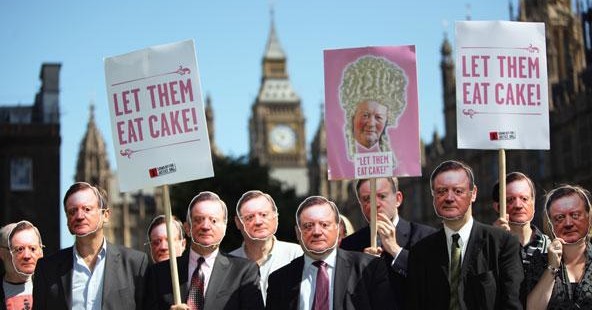 This summer has seen Greeks rioting in the streets over austerity measures and now Italians having a bad case of agita as their economy teeters. But if Europe’s nerves are frayed, so are Britain’s. Although not part of the 12-nation eurozone, Britain is going through its own summer of discontent because one of the toughest austerity regimes on record.

What is shaping up there is the sharpest showdown in generations between two diametrically opposed ideas of what the nation should do in the face of a huge budget deficit, a sluggish economy, and high unemployment. And the experience of the Brits holds lessons for America.

Conservative Prime Minister David Cameron and his Finance Minister, Chancellor of the Exchequer George Osborne, have been in the hot seat since announcing a year ago the most brutal austerity program in British history. When protests broke out in late March, they were primarily about plans. That brought between a quarter of a million and half a million Britons into the streets.

Now the demonstrations are about the concrete results of the Cameron government’s audaciously radical regime of spending cuts, public-sector layoffs, reduced pensions, eliminated services, and tax increases. On June 30 central London was again jammed with demonstrators. Crowd estimates varied from 100,000 (the official police count) to 500,000 (a union figure). Some 11,000 state schools, more than half of all of them, had to close for the day.

The specific issue was a bill in Parliament that will raise the amount public-sector employees and teachers pay into their pensions and defer the date they can collect benefits. This drew a six-figure crowd of ordinarily calm, middle-class Britons (in addition to angry students protesting tuition increases). Some unions, such as the quaintly named Association of Teachers and Lecturers, had never before participated in a national strike.

The first year of austerity has not gone well for the Cameron government. In the public sector, where cutbacks are most severe, the figures for Cameron’s five-year plan are startling: a 68 percent cutback in government housing subsidies, a 31 percent cut in the budgets for the environment and rural support programs. Culture and sports, justice, local government, job training: All of these departments are looking at spending reductions of 25 percent or more.

Osborne’s commitment is plain: Long-term growth can be achieved only through cuts in spending. In essence, it is a replay of the phrase that made Margaret Thatcher famous among Britons back in the 1980s: “There is no alternative,” commonly abbreviated as TINA.

The Tories have options the Greeks do not enjoy, and not all has gone south. Since Britain controls its own currency, it can let the pound drop to stimulate exports. Unemployment is high, at 7.7 percent, but that is a stable figure and a marginal improvement since the spring, achieved even in the face of public-sector layoffs of more than 100,000 and counting.

But it is now clear that growth is a long way off. The economy has been stagnant since autumn, and all the major institutions—the Organization for Economic Cooperation & Development, the IMF, and a raft of private-sector forecasters—are dropping growth predictions to the range of 1.4 percent to 1.5 percent, even as Osborne sticks to a (relatively rosy) 1.7 percent estimate for the current fiscal year.

A more telling figure is the measure of retail sales. They fell by 1.4 percent in May, the most recent month reported, and we no longer have to wonder why British businesses are not investing. Why should they? The Cameron cuts are intended to restore business confidence, but why should deflationary fiscal policy make anyone confident when Britons are now demonstrating that they are too uncertain to spend?

So the results are coming in on Britain’s austerity crusade, and Americans should pay especially close attention, because we are contemplating what can now be established as the same mistake. It is this: Thinking austerity by itself will work.

Few question the need to bring down Britain’s deficit, which is still 10 percent of GDP, or its debt (officially 70 percent of GDP but possibly understated). Few doubt these necessities in the U.S., either. But without sufficient offsets to stimulate demand—domestic consumption or demand in export markets—austerity is half a policy.

A curious phenomenon has arisen among corporate and City of London economists. Nearly to a one they approve of Obsorne’s severe determination. But we can now see that the companies paying the salaries of these house economists have little confidence in official policy when it comes to putting up new plants, hiring new people, or building inventory.

This leads to the larger question prompted by both the British and U.S. cases. What is the underlying intent of fiscal hawks on either side of the Atlantic and what is the philosophic commitment behind it? It seem to be quite beyond the simple matter of regaining a sound fiscal footing.

In the British case, unions are now talking of a confrontation of Thatcher-era scale, the first in a generation. Following the June 30 protests, they promised a series of rolling demonstrations in the autumn that will involve as many as 2 million people, and since last spring they have made good on their promises twice.

But the Thatcher years may be the wrong reference. Never mind the embattled 1980s: It now looks as if the Tories are thinking back to the late 19th century, when a Conservative consensus reigned and the contending forces of British socialism, social democracy, and welfare-state advocacy had yet to appear on the scene. This is the reprise now playing. The Labour Party didn’t exist until 1900. And it was 24 years later before Ramsay MacDonald was elected as the first Labour prime minister. The reek of nostalgia among Conservatives now is strong.

America has no such political diversity to manage, no such clearly demarcated interests. Socialism under any banner has made only brief appearances on the U.S. political scene—and played minor parts in every case. But one hears something similar every time a commentator makes reference to the Gilded Age. Understood properly, and with present-day Britain as a guide, the fight in America to “take back our country” seems to be about going back to pre–New Deal and pre–Progressive era ways of doing things. As we now see in Britain, this can quickly turn economic problems into social problems, too.

The Jerome Levy Forecasting Center, a research and consulting firm in Mount Kisco, N. Y., calls current conditions in Britain, the U.S., and some other advanced economies “contained depression,” and the paper it produced on the topic is frighteningly matter-of-fact about a term we are all trying to avoid. But the returns are now in: Overplayed austerity plans, with no balancing boost for demand, will make it difficult for anyone to flinch from the dreaded word. It seems to lie in the middle distance now.