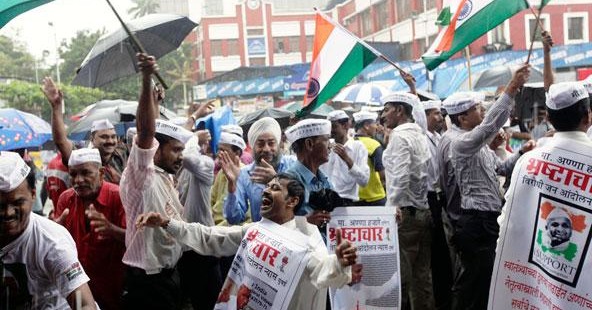 Asian Unrest: An Ominous Sign for the Global Economy

The specter of social unrest is haunting the high-growth economies of Asia. In one nation after another, rising expectations are being dashed as economic conditions deteriorate. In effect, Asia’s nascent middle class is getting its first taste of middle-class insecurity — the kind that has been a feature of most Western societies for decades. And the bitterness is evident from South Korea to Indonesia and across China and India.

We are not, so far, seeing widespread street protest. The exception is India, where ananti-corruption campaign led by Anna Hazare, a charismatic social activist, has transformed into a protest movement similar to those seen in Britain. The protests startwith a narrow focus and grow into nationwide demonstrations against income inequality and what is widely seen as an unfair sharing of both prosperity and (now) the burdens of slower growth and austerity.

The striking thing about Asia now is that the themes of discontent are the same everywhere you look. In South Korea, a recent referendum on free school lunches—the conservative government wanted to abolish them as “populist welfare”—turned into a national temperature taking on social-services policies. The opposition won the fight by boycotting the polls, thus depriving the government of the one-third proportion of the vote it required by law to pass the measure.

We are now seeing the kind of Stalin-like cult there that
appeared in Russia in the 1990s: a grotesque nostalgia for
the days of Suharto.

Indonesia is another case where the unshared fruits of prosperity are roiling national politics. It has boasted one of the world’s highest growth rates (6.1 percent last year, inflation-adjusted) under Susilo Bambang Yudhoyono, the once-promising president. But his failure to spread the wealth downward to the vast nation’s poor and lower middle class has earned him the lowest approval ratings since he was re-elected by a wide margin in 2009. It is also creating something worrisome. We are now seeing the kind of Stalin-like cult there that appeared in Russia in the 1990s: a grotesque nostalgia for the days of Suharto, the dictator who was ousted in the late-1990s after several decades of repressive rule.

China, as usual, is playing a rougher game. With signs of a modest slowdown now evident, it is starting to discourage the rural migration that has been the lifeblood of the industrial cities for two decades. The Bureau of Statistics in Beijing recently reported that the capital has grown from 13 million to nearly 20 million over the past decade and that a third of its residents are now rural migrants. For the time being, at least, it wants them to stay home. Method: Tear down the informal schools migrants’ children attend and bar them from official schools—which is prompting the very protests the policy was intended to prevent.

A couple of important conclusions can be drawn from Asia’s newly restive populace.

Certainly, the middle class in Asia has grown substantially over the past two decades. According to the Asian Development Bank, in 21 Asian developing countries it has advanced from 21 percent of the population in 1990 to 56 percent in 2008—that is, from 565 million people to 1.9 billion.

One year to the next, it is entirely possible for
a family in Jakarta or Kuala Lumpur or Shanghai
to slip back down below the poverty line.

Impressive, yes. But we have to qualify what we mean by “middle class” and then take a closer look at the numbers. By the ADB’s definition, an Asian is middle class if he or she earns $2 to $20 a day. That’s a big spread across a low range of income figures. And in many cases, it’s the bottom end of the range that predominates: In Indonesia, 35 percent of what is considered the middle class earns $2 to $4 daily; in Thailand, the proportion is 33 1/3 percent; in China, it is 34 percent.

These figures suggest a precarious social, political, and economic balance that many of us in the West tend to overlook. One year to the next, it is entirely possible for a family in Jakarta or Kuala Lumpur or Shanghai to slip back down below the poverty line.

A few months ago, all the talk was of a “two-tier” global economy: The West would slow but Asians would charge on, hauling sluggish Europeans and Americans out of the trough. Even amid an economic slowdown that is now starting to look global, Asians will report growth rates the rest of the world can only dream about. But can they lead us all out of the valley of recession? Not likely. Across the region, social and political turbulence seem to be right around the corner.

Part I of Asia’s Place in the World, “The Big Question for China as Global Growth Slows,” was published on August 3, 2011.

← Decline of America: Have We Given Away the Store?
Trade: How China Is Big-Footing U.S. Companies →