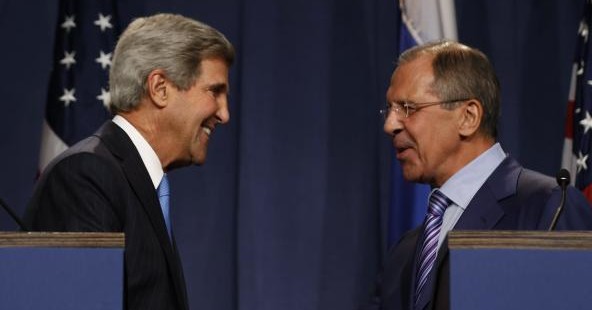 It is getting hard to count all the surprises arising from the Syrian crisis. And there are more coming. Outcomes unthinkable even a week ago can now be responsibly imagined—and pursued.

(1)          Relations between Washington and Tehran come out of the deep freeze for the first time in 34 years, transforming the Middle East dynamic.

(2)          The big-think crowd in Washington finally gets the compass out and puts American foreign policy on new bearings—riding the wave of the region’s immense vitality instead of resisting it, recognizing that its direction cannot be determined, not long term, from without.

Few have given this kind of thinking much attention: Washington has been flatfooted ever since the Arab Spring. Now it requires surrendering some longstanding presumptions as to American power and prerogative in the region. If the Obama administration is smart and brave enough, it can draw significant, even historic advantage from a shambolic interim in U.S. foreign affairs.

RELATED: OBAMA AT WAR WITH HIS OWN ARGUMENT OVER SYRIA

For one thing, the timing of this latest turn in the Syrian crisis could not match up more perfectly with Iran’s new president, Hassan Rouhani’s offer not just to improve relations with Washington but to shove them into an innovative phase of cooperation. For another, Obama can interpret Syria to Americans as the place where we finally overcame our addiction to unilateral “missions” and wars of choice.

The agreement Secretary of State Kerry signed Saturday with Russian Foreign Minister Sergei Lavrov in Geneva outlining plans to dismantle Bashar–al Assad’s chemical weapons stockpiles was a stunner by common agreement. As the Financial Timesrecounted in a useful timeline, even Moscow was in a dither as Kerry and Lavrov negotiated.

At last we are getting beyond a military option against Assad that has never borne much scrutiny. It now looks so risky and irrational that even the people who hatched and propagandized the idea cannot get away from it fast enough. “President Obama is deeply committed to a negotiated solution,” Kerry said in Geneva over the weekend, referring to the man previously deeply committed to punishing Assad by way of intervention.

There is caution galore among U.S. officials, from Kerry on down, as to whether a solid agreement will emerge. Equally, no one knows whether implementing any such deal will prove workable. That could take us into next spring. As now worded, the pact will call for Syria’s chemical agent stockpiles to be destroyed by mid–2014.

It is not too early, however, to suggest that the military option is unlikely to be revisited as of this week, even as Obama and Kerry insist that they have not withdrawn it. There are three reasons to think so:

• A reckless course driven primarily by political baiting at home and a misplaced obsession with “credibility” abroad will look still more foolish if it involves tipping over months of multilateral diplomacy and verification work at the other end of the process now beginning.

• Similarly, threatening or taking military action against another country will be no more lawful next spring than it is now. Washington’s usual ways around international law and the UN Charter came over as weak and persuaded few this time, even when the Obama administration hit its most assertive notes. The extra-legal case stands to get weaker from here on out, not stronger.

One of the breakthroughs in Geneva was to move the Syria question into the UN framework. Once in, hard to take out is the thought. Lavrov has already advised Kerry that no UN resolution covering Assad’s possible failures to deliver on an agreement can call for a military response.

Realistically, then, the cruise missiles bit has had its time. Syria is a diplomat’s game now, and this is just as it should be.

The very key point as Kerry and Lavrov keep talking is to tie a pact on the chemical weapons question to a conference that will yield a political settlement. This seems to be the thought so far, and foregoing this goal would devalue (to one degree or another) the success of pulling Assad into the Chemical Weapons Convention and destroying his stockpiles.

PUTIN’S PUBLICITY PUSH
Who saw a week ago that Russian President Vladimir Putin was about to assert himself as a world-class statesman? Everybody had Putin down as Assad’s unreasonable backer and Moscow as Damascus’s de facto foreign ministry. Clearly, there was no more to it.

Who could have dreamed a week ago that Putin would arrive deus ex to rescue Obama just as the latter was losing ballast and stuck in the preposterous position of shelling Syria all alone.

RELATED: 6 REASONS VLADIMIR PUTIN IS PRIMED FOR A FALL

American news accounts just after the reports of the Kerry–Lavrov meetings got all fuzzy when they came to attributing credit for the unexpected turn toward the negotiating table. Somehow, the U.S. media contrived to cast Obama as pleased with “Russia’s interest in playing a role” as the diplomacy gets under way.

Sorry. Putin made himself the prime mover in the Syrian crisis with a diplomatic strike no slower than lightning. He has often proven far more skilled at statecraft than Western accounts of the man customarily indicate. In this case, he read Obama’s weakness perfectly, knowing just when it had ripened to the point the fruit of it could be picked.

The truth of this past week is that the president and his secretary of state have been stumbling in the dark for months, almost every day a mop-up of the previous day’s gaffes. Now they have fluked into a policy opportunity a little the way Laurel and Hardy always walked happily on at the end of each film  full of pratfalls.

This is not intended to diminish the administration’s achievement. To be honest, there is little to discuss. It may be that Obama and Putin touched on the idea of taking control of Assad’s stockpiles in Mexico last year and that Kerry and Lavrov took it up later. But the administration was plainly flummoxed when Moscow conveyed its thinking. Kerry had just finished saying in London, “It can’t be done, obviously.”

The point is to suggest that if the Obama White House stops worrying about the photo ops and faking initiatives it did not take, it will be in a position to get some big things done.

One is to embrace a turn in relations with Iran so new it still awaits shaping. The opportunity is there. Since Rouhani’s election in June, the administration has continued with the tiresome “the-ball’s-in-their-court” rhetoric, proof of intent somehow lying in Tehran’s renunciation of nuclear technology it has every right to possess. But there seems to be more going on behind the folding screens.

We have sketchy reports that Obama is now exchanging letters with Rouhani, the topics being two: the chemical weapons question in Syria as well as the nuclear program. Thebest of these I have read is by Paul Richter, Washington correspondent for the Los Angeles Times. Beyond the exchanges, he wrote a few days ago, “US and Iranian officials are tentatively setting the groundwork for potential face-to-face talks.”

“Tentatively” and “potential” may rain lightly on the parade, but this is hugely positive. The next big moment: Rouhani is to address the UN Security Council on September 24, and the world will meet the man. Do we dare anticipate some modest gesture passed between Rouhani and Obama? The big moment after that if the president is smart: Rouhani goes to Geneva when a Syria conference convenes. At this point, leaving Tehran out is to choose sulking over opportunity.

There is a broader project for the Obama people to undertake. We have just watched Washington step away from one of its mythically driven “missions” abroad, a rare turn of events over the past six or seven decades, and submit to multilateral, institutional frameworks, which is yet rarer.  We have also watched as post–Soviet Russia declares itself a player in the game. Putin’s big deed was to assert a non–Western perspective as equal to the West’s. Syria is all about the jostling of the energetic East with the less-dominant West.

This dimension of the Syria crisis as it is now sprinting along can come to nothing, depending on how the administration plays it. Another Iraq may be waiting around the corner. Or President Obama may have begun a gradual move on the part of the whole nation toward a reassessment of where America’s rights and responsibilities start and end. “Historic” would not be too strong a term.

← Let’s hope for an American defeat over Syria
Was America ever exceptional? →