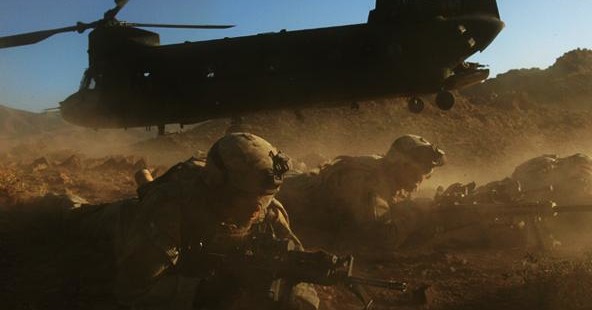 The Unwinnable Afghan War: Get Out Now to Save America

It’s supposed to be the dog days of August, but we find ourselves watching global markets on a frightening teeter-totter and waiting for Washington to cobble together a debt deal that may or may not hang together.

More tragically, the month has seen the worst day of U.S. casualties in the 10-year history of the Afghanistan war. This as we were told that America would be pulling troops out of the Afghan mountains and valleys, declaring peace with honor and walking away.

And what do we hear from our defense secretary? Leon Panetta chooses this fraught moment, filled with the fate men and women in uniform and the economic future of the country, to warn against “a round of across-the-board defense cuts that could do real damage to our security, our troops and their families, and our ability to protect the nation.”

It is not simply the atrocious timing of Panetta’s assertion, coming just before the worst day in the financial markets since the 2008 crisis. It is the sound of another senior Washington official—and a Democrat to boot—refusing to recognize that what we have in the defense budget is a sacred cow wandering our streets. It is time to bring it into the barnyard and treat it like any other animal.

Let us be clear. The downing of an American helicopter in a remote Afghan province late in the evening of August 6, and the consequent deaths of 30 American soldiers and 8 Afghans, was the biggest tragedy of the Afghan war. But the fact still remains: Afghanistan offers a once-only opportunity for Americans to reverse the defense budget’s longstanding status as an untouchable item on the government’s books, beyond all negotiation. It is there we can put defense cuts squarely on the table, label them as just what they are, and declare a measurable peace dividend of the kind America ought to have enjoyed two decades ago.

It is difficult to say just what the wars in Afghanistan and Iraq cost because different agencies count thing differently. The Defense Department reports that at the moment Iraq and Afghanistan cost the U.S. slightly less than $10 billion a month, or $120 billion a year. According to the Congressional Research Service, which prepares reports for Congress, Afghanistan accounts for two-thirds of that amount.
As to Libya, the costs so far are also unclear. But as early as April, defense analysts predicted that they would soon top $1 billion —as they have in the months since.

Even America’s mayors, who are not traditionally noted for their foreign-policy prowess, see the folly in this kind of profligacy without purpose. Imagine the change in American thinking if Obama were able to wave $240 billion in front of the TV cameras a year from now and say, “See what we saved in Afghanistan.”

The opportunity lies in Obama’s promise a couple of years ago to begin withdrawing some of the 98,000 American troops now stationed in Afghanistan in July of this year. It now appears that Washington wants to wait around for talks with the Taliban before any substantial number of troops gets their repatriation papers. This is a mistake: There is talk of such talks, the usual prelude in such cases, but any progress could take years.

There is another reason Afghanistan is a good place to begin reimagining the American stance toward defense spending. We’re not getting anywhere and won’t, just as the Russians (and the British before them) could never conquer those forbidding, isolated valleys and the warlords who rule in them. Richard N. Haass, president of the Council on Foreign Relations, made this assertion a year ago.

Since then, we have been on the very brink of a reversal of national opinion on the sacredness of the defense budget. The statement from American mayors at their annual conference in June is one sign of this. In the recent debt deal, Obama has scheduled $350 billion to $400 billion (depending on how you count it) in defense cuts between now and 2023. It’s a measly figure and an extended time frame, and not even Leon Panetta has raised an objection.

The danger of an out-of-control defense establishment, beyond true civilian control and oversight, extends back at least as far back as President Eisenhower’s “military-industrial complex” speech, his farewell warning in 1961. Afghanistan is a case in point of what results from “imperial overstretch.” The scholar Paul Kennedy’s phrase is not a popular term, but if you look at the war in Afghanistan and consider the condition of Washington’s bank book, it is a precise description.

The arguments to spend less on defense, spend smarter, and still preserve American security are mounting. And it is just as well they are made by former Army officers and retired Pentagon officials—the kind of people who can get a Nixon-in-China effect because of their credentials. “It’s not enough to tinker with the defense budget,” Joseph S. Nye, a former assistant defense secretary, recently argued in the New York Times. “We also need to rethink how we use our military power.”

Afghanistan, at this moment of urgent fiscal crisis at home, is a good place to begin the exercise.