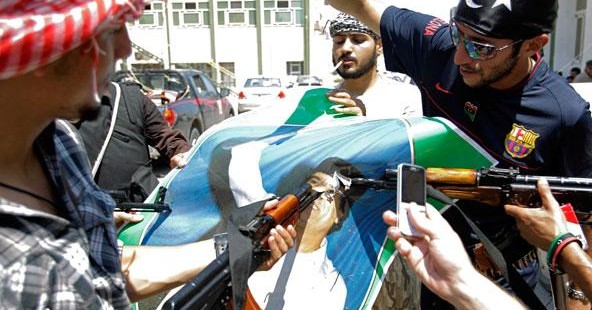 &#8220;American aid, not American troops,” President Obama declared from a Martha’s Vineyard vacation house on Monday as news of Tripoli’s fall toinsurgent forces flowed in. In five simple words, the President described a fundamental turn in U.S. policy abroad – a reversal of six decades of thinking.

Obama deserves a high mark for his management of U.S. policy since he announced last March limited support for the insurgent forces arraigned against Colonel Muammar el-Qaddafi. Subsequently he backed NATO bombing runs (7,459 of them as of last weekend) and the dispatch of foreign advisors (primarily from Britain, France, and Italy). In July, Obama announced recognition of the National Transitional Council – a key move that gave the rebel leadership access to billions of dollars in needed funds frozen in U.S. accounts.

There were good, not very glorious reasons for the President’s restraint. Polls showed consistently that the U.S. public had little taste for the Libyan venture. With the wars in Afghanistan and Iraq costing some $120 billion a year – and a third war at home over the federal deficit –the price in politics and deficit spending of another involvement abroad was surely on the President’s mind. But whatever his reasons, we are already a long way from the thinly disguised unilateral interventions favored during George W. Bush’s two terms.

Post-Qaddafi, Libya will prove a fractious nation to put back together. It is riven with sectarian strife and tribal rivalries on the one hand; on the other, it is woefully short of mediating political and social institutions. And as an oil producer with a potential to turn out 2 million barrels a day, it may again find that the blessing of its resource will also be a curse – especially if other nations rush in with self interest as the primary motivation.

So how to support a sensible transition in these circumstances will be no easy task. But there are two starting points:

• However messy the politicking in Tripoli, and however long it drags on, Libyans should be left to decide what Libya is going to be as a nation. Foreigners arriving with blueprints for a new government in their own image are entirely “yesterday,” as of the Arab Spring. Support for a post-Qaddafi transition, even if it involves putting foreign troops on the ground, as some already advocate, must be clearly distinguished from Iraq-style intervention.

• Unilateral action must be off limits. Assistance – in reviving the economy, in maintaining security, and in building institutions – will be needed urgently. But it should come from a variety of organizations, including NATO, the E.U., the Arab League, and the African Union. Several months ago, Catherine Ashton, the E.U.’s foreign minister, proposed a Partnership for Democracy and Shared Prosperity for the Southern Mediterranean. This is precisely the kind of thinking that is needed now: Libya needs to be drawn into the world, not into the orbit of one or another nation with designs of its own.

So while it is almost certainly the beginning of the end for Colonel Qaddafi, the reigning dictator in Libya for the past 42 years, it is just the end of the beginning for the U.S. and other nations that have been supporting Libyan rebels. Iraq taught us this lesson (among many others): It’s a lot easier to get rid of a despot than it is to replace one with a coherent government. The hard work lies ahead – mostly for the Libyan people, but also for their friends – and collective action should be the rule from start to finish.

Libya can be the first place a fresh American approach to foreign affairs takes root – a 21st century approach, suited to the new era we have already entered.

← The Unwinnable Afghan War: Get Out Now to Save America
Japan Snaps Back, Moody’s Drops Credit Rating. Huh? →