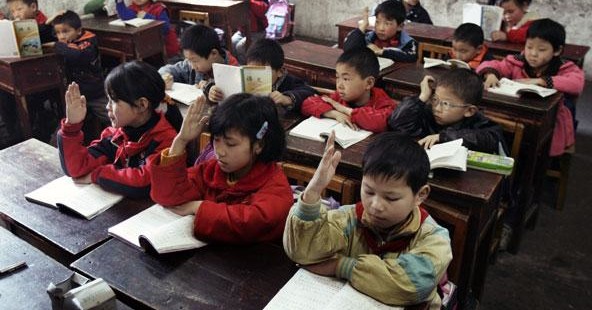 The Pacific Century: Can the U.S. Compete?

Remember those astonishing test scores that came out late last year — the ones that measured science, reading and arithmetic proficiency according to an international standard that included China for the first time? Not even the Chinese could quite believe the results.

Students in Shanghai took global firsts in all three categories (with Hong Kong boys and girls hard behind them). For the record, American students came in — are you ready? — 23rd in science (about the average among 65 countries tested); 17th in reading (just above average), and 32nd in math (grimly south of the world average).

Sobering enough in themselves, these kinds of numbers. Now we’re starting to get reports that tell us what these factors will mean for global competitiveness over the next few decades. The new century, at last, starts to acquire some sort of shape and theme.

The best of these studies was published just a few weeks ago, an imposing, chart-laden document by two senior economists at Citigroup Global Markets, Willem Buiter and Ebrahim Rahbari. It’s not the first in the emerging genre of global competition reports, but it will remain the gold standard for some time. Global Growth Generators, or 3G in the study’s parlance, looks beyond whether the world’s center of economic gravity is shifting eastward: It tells us when it will, how quickly, exactly why, and who the winners and losers are going to be.

The forecasted winners are a slightly anomalous list, bearing some explanation, but the 3G pack as Citi sees it is comprised of Bangladesh, China, Egypt, India, Indonesia, Iraq, Mongolia, Nigeria, the Philippines, Sri Lanka and Vietnam. Now you see what I mean by needing explanation.

Buiter and Rahbari applied six criteria (“a weighted average of growth drivers”) to determine the economies destined for the winner’s circle. (We’ll get to this in a moment, but it is a bracing list of analytic tools when applied to the American case):

We have heard some of this before. The Growth Report, published by the World Bank’s Commission on Growth & Development, reckoned three years ago that high, sustainable economic growth requires a domestic savings rate of 20 percent to 25 percent or higher.

In 20 years, Asia’s share of global GDP
will rise from a third now to nearly half.
But Buiter and Rahbari take their 3G index much further by way of forecasts. Here are a few of their choicer conclusions:

As to those apparent oddities on the 3G list, the criteria account for them. Iraq’s demographics are “eye-watering,” the study says, and growth will run at 6.1 percent for the next 40 years. Bangladesh is in the right neighborhood, between China and India, and this will be a powerful benefit; Mongolia is sitting on a resource mountain it has discovered just in the past decade and seems prepared to manage it better than many oil producers did their earth-given gifts.

“We’re adamant this is not an investment recommendation,” Rahbari said when I spoke to him by telephone from his London office. “Maybe we’ll write that in the future, but 3G is intended to set broad parameters clarifying the relationship between growth and capital investment.”

As to the U.S., one braces for the worst in reviewing those criteria. It comes up well enough by way of open trade (although not perfectly, as any cotton or sugar producer can tell you). But health care, education, the policy process? One hardly need ask.

U.S. Growth Lags Behind
It is not a brilliant picture. The U.S. is forecast to grow by 1.9 percent yearly (in real terms) until mid-century, compared with a global GDP growth rate of 4.2 percent. By way of per capita income it will slip from third now (behind Singapore and Norway) to fifth. (The top four will all be in Asia by 2050.)

But the authors are not so pessimistic as such statistics imply. In terms of technology and innovation, they say, the U.S. will remain a “frontier” economy. And it is better off than other advanced nations (and China, for that matter) by way of its demographics: America is not aging at the rate of many other societies.

“The level of public debt and deficit — and, very important, the projections for the next decades — do raise questions of sustainability,” Rahbari says. “But I’m actually an optimist to a point. It’s not a problem that can’t be solved. One hopes for some developing balance between the two parties.”

That’s a useful global view of the current American predicament. And speaking of global views, one of the irresistible details included in Citi’s 3G report is a map that purports to show the geographic center of global economic activity as it is evolving before our eyes. (It’s actually “the average location of economic activity,” the study explains.)

In 2008, it suggests, the world’s economic center of gravity was out in the mid–Atlantic somewhere. And from there it is ever eastward: In 2050, just 39 years from now, it will be somewhere in western China, near the borders of Bangladesh and India, and not too far from Vietnam.

Welcome to the Pacific century, if you go in for these kinds of phrases.