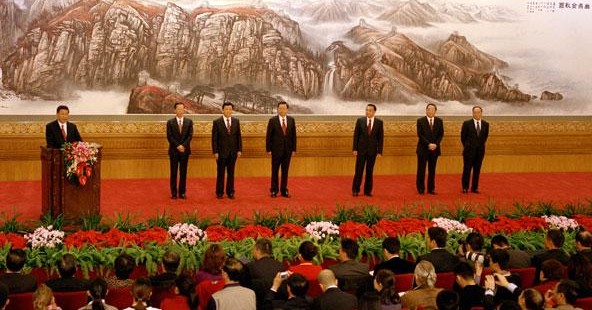 Reform on the Back Burner with New Chinese Regime

China has just decided to hold onto an economic, political, and social model that has a proven record of producing high economic growth – a model that never fails to tip over. I have witnessed the collapse of this kind of regime in Korea, the Philippines, and Indonesia. The leadership in each case held on past the model’s sell-by date.

The features of this model are startlingly consistent wherever you find it. Export-led production produces high growth rates, but it also leads to radical income inequality. There is urban drift—rural villagers flocking to cities—causing numerous social problems. There is little place for democracy because production must be maintained without a blip, and the leadership cannot afford to let wage-earners, who enjoy only minimally the benefits of what they produce, express themselves.

You do not have to look far. That is China today, just as it was Korea under the military dictators and Indonesia under Suharto. Since Deng Xiaoping launched China’s reform period in 1980, it has only been a matter of time before China came to its day of reckoning. As even the new leadership appears to understand, that day is now near at hand.

PASSING THE TORCH?
The only surprise to come out of the convocation of China’s leaders in Beijing last week was that there were no surprises. We are now in for a decade of status quo on the mainland when change is becoming urgent. The world’s second-largest economy is destined to become more fragile and more prone to political disruption. As some party leaders already admit, Communist rule may not even last until the party celebrates its centennial in 2021.

Hu Jintao, the outgoing president, signaled the leadership’s major concerns in a speech delivered at the opening of the 18th Party Congress. Corruption that is monumental in magnitude, economic reforms waiting to happen, greater democracy and a fairer, more equitable society: Hu rattled off his thoughts on all of these problems. “If we fail to handle this issue well,” he said of the corruption question, “it could prove fatal to the Party and even lead to the collapse of the Party and the fall of the State.”

He may have been thinking of his departing colleague, President Wen Jiabao, whose family controls $2.7 billion in assets, in what The New York Times calls “Hidden Riches.”

And this is why it is so strange that the party settled on a new generation of leadership that promises little of the imagination and innovation China needs in its political, economic, and social spheres. Elizabeth C. Economy, director for Asia studies at theCouncil on Foreign Relations, called the Congress “a triumph of the Party’s conservative clique.” On her blog she added, “It didn’t have to be that way, but the Party elders elected to preserve their legacy at the expense of opening the door to real change.”

China watchers read these conclusions into the lineup of leaders announced last week. Proven reformers such as Wang Yang, the Communist Party chief in Guangdong Province, which has by tradition been in the forefront of change in China, were left outside the new ruling circle. Elevated within it were men such as Zhang Dejiang, an economist trained in North Korea.

There is, of course, Xi Jinping. We do not yet know much about the 59-year-old Xi. In the run-up to the congress, he appeared to be something of a Hu Jintao clone, though in his speech he came over as a looser, less ideological leader. He now holds offices no Chinese has ever held at once: president, head of the Communist Party, and commander in chief of the People’s Liberation Army. The assigned role appears to be, “Hold steady, Comrade. We are facing choppy seas.”

BEEN THERE, DONE THAT
Certainly China will continue its efforts to improve income distribution—both socially and geographically—and allow for modest democratic mechanisms at a strictly circumscribed local level. Corruption and environmental degradation are also on the agenda. This was clear during the party congress from Hu Jintao’s speech onward.

But the agenda is not the issue. The agenda has been the agenda since Hu took office a decade ago.

The issues are the pace at which Beijing proceeds under its new leaders and what these leaders mean when they talk about such things as economic reform and democracy. Given the increasingly restive atmosphere among China’s 1.3 billion people, the leadership has plainly been proceeding too slowly. In this context, last week’s news is that they will continue to move too slowly.

China’s idea of democracy, to take an obvious example, is a kind of corporatist democracy, wherein public opinion is voiced through consultative institutions without allowing citizens any substantive power. “This is not ‘democracy,’” Ms. Economy says, “but democracy with Chinese characteristics.”

There is one other feature of the Chinese model that should be mentioned. It tends to be extremely brittle, in almost all cases snapping and collapsing instead of flexing and evolving. This fragility should worry us most. And we are not talking about fragility in some quiet corner of Latin America or Africa. As the world’s second-largest economy, serious dislocation in China would do incalculable damage the world over.

This reality assigns the Chinese leadership certain responsibilities—the responsibilities of a great power. China is at the doorstep of such a status. And exercising this power means managing its domestic conditions as well as its international relations. My reading of last week’s congress: China’s leaders have stepped to the threshold, but they have flinched and failed to cross it.