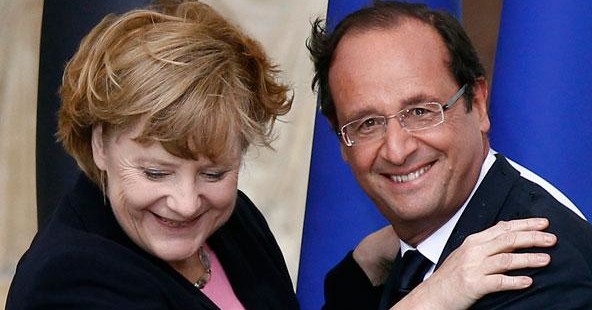 In Spain, King Juan Carlos proposes to give up his 136–foot yacht (although there is bickering over who should get it). In France, President Francois Hollande just raised $390,000 by selling 1,200 bottles of wine from the Élysée Palace cellars (in part to replenish the collection, it must be said).

The theme is, “In hard times we must all do our part.” Nothing truer could possibly be said about Europe right now. But gestures such as these prompt more worry than relief. They suggest a lack of seriousness—a failure among European leaders to grasp the enormity of the task.

Here is another one. Eager to make nice among suffering southern Europeans, Germany has just agreed to create 5,000 jobs or apprenticeships for unemployed Spanish youth. It is a fine thing: 5,000 Spaniards will now go north to work and (probably) send money home. But wait. For context, note that nearly 2 million under–30 Spaniards are unemployed. Now how does it look? Like so many bottles of Bordeaux?

AUSTERITY IS EASY, GROWTH IS HARD
Europe took a big step not long ago, when it recognized that straight-up fiscal and economic austerity policies were turning politically and socially corrosive while not engendering credible recoveries in many European economies.

But now Europeans seem to be wandering. Even as the European Union proposes to remake itself, nobody knows where its center of gravity will lie—in Brussels, or Frankfurt, or in national capitals.  Nobody knows what “post-austerity” means—what comes next.  Growth is the object, of course, but there are no clear growth policies yet in place.

In the best of outcomes, this passage will prove a necessary interlude out of which solutions will emerge:

• New Institutions, including a banking union
• Support mechanisms, including the European Stability Mechanism, a rescue fund
• A new and fairer balance among Europeans of different development levels in the north and south, a Europe of previously unachieved unity. Political constituencies at the national level will not be cut out of the picture, as they have been—think Greece, think Italy—during the current crisis.

As the Financial Times pointed out in a recent editorial, Europe’s debt and deficit levels both remain in the category of manageable. But—the salient point—more has to change than European leaders so far appear willing to change. Put another way, it’s time to get past the yachts and fine wines.

THE FLIMSY THREE PERCENT MANDATE
Consider the latest on budget deficits. The EU regulation is that no nation can run a deficit of more than 3 percent of its gross domestic product. (Note: We are not talking about sovereign debt, which is another matter.) Last week the European Commission announced that seven member nations would be given more leeway in meeting the 3 percent target. France and Spain are among the big ones; Italy has been altogether excused from the so-called Excessive Deficit Procedure.
This is a post-austerity move and a smart one. But with it the EC called for accelerated reforms of various kinds, notably in labor markets and pension systems. This may not be so smart, depending on how rigorously and briskly these reforms are to be pushed through.  Hollande, who sits atop Europe’s second-largest economy, is coming in for special scrutiny.

The other country facing special scrutiny is Italy. On one hand, Hollande faces hotly politicized constituents who consider him a traitor for caving to German austerity hawks and neoliberals in Brussels. On the other, France is half of Europe’s inner core, and Hollande cannot afford to be outdistanced by German Chancellor Angela Merkel.

So you get a somewhat schizophrenic leader in Élysée Palace—and no wonder his poll ratings are dismal. “All the reforms that have to be undertaken will be done,” Hollande said last week. Not a minute later he added that it was not for Brussels “to dictate what we have to do. Otherwise, no sovereignty is possible.”

You start to wonder if Hollande is not a little bit of a ditz. How can France’s leader, a Socialist and a committed European, assert the sanctity of national sovereignty when Europe is hard at work superseding that very concept? It is this kind of intellectual paralysis that could sink the post-austerity experiment.

At the moment, everything is coming down to politics, Hollande and Merkel are dancing Europe’s most important waltz. While Hollande needs Merkel to reaffirm France’s stature within core Europe, the chancellor needs Hollande to keep an ever-more disconnected Germany on the European map.

Just before the weekend, the two met in Paris and put together what they called a “contribution”
on the European question covering, primarily, the EU banking union that was first agreed upon last year. At Merkel’s insistence, the document both signed calls for national banking authorities, not Brussels or Frankfurt, to manage future bailouts for financial institutions.

It is not a technocratic detail. First, it directly contradicts the plans to centralize banking authority laid down by the EC and the European Central Bank. Second, it suggests Germany still does not register that the banking crisis involved international lending (not least from German banks) and hence current account imbalances. When trouble arrived, ill-fortified national authorities were left to clean up the messes.

One can scarcely believe that the politically astute Merkel would insist on such a stipulation, or that the apparently befuddled Hollande would sign it. But that is Europe just now. Are unity and integration coming or going? What comes after austerity?

← Will the US Buy Obama’s Plan to end the War Machine?
Turkey Could Be the Middle East’s Powder Keg →