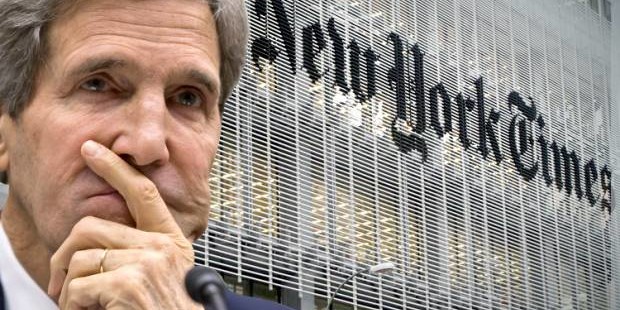 The Times walks back a story about Syria and chemical weapons, a reminder of the media’s complicity with power

The big doings do not stop in the Middle East. We now have a deal on Iran’s nuclear program that anyone looking has to call historic. Next week talks on the Syria conflict are to convene in Switzerland, and the latest line is that Bashar al-Assad and the mostly awful opposition to his rule may permit relief and even accept a cease-fire.

It is almost enough to start getting excited. But not quite. The diplomatic effort on Iran sails close to the rocks as we speak, and the Syria talks (called Geneva II, though they will take place in Montreux) may prove a stillborn. These are vital questions for America and its 21st century fate, so let us hope for the best.

Two things to consider as we do our hoping. One, if diplomacy fails to settle these flashpoint issues it will be because Washington is not yet capable of taking diplomatic solutions seriously. Two, in the event of failure we are unlikely to read the above truth in our newspapers because they are not yet capable of writing the truth about American conduct in global affairs.

A few reasons for these concerns. We have the problem of unreasonable demands, for instance — conditions set with the unstated but evident purpose of scotching deals based on many-sided compromise. Secretary of State John Kerry thinks Assad should be in Montreux to negotiate himself out of office, even as his adversaries, who emerge as a collection of opportunists and sectarians, are too busy destroying one another to inspire any confidence in a better-than-Assad alternative.

I also count the American media a critical threat in this context. The history of their failure to maintain a working distance from power is long and craven, but things are worsening at the very wrongest moment. More on this in a moment, but for now: Misinformation, disinformation and worse again prove instrumental in keeping most of the electorate quiescent as Washington dresses up policies and strategies few would find acceptable were they honestly portrayed.

The deal struck last weekend between Iran and six outside powers, chiefly the U.S., is precious as gold. If the interim agreement produces a final settlement, Iran can come in from its long isolation and a 35-year enmity between Washington and Tehran can end. As I see it, Iran is one key to calm across much of the Middle East: in Syria (and by extension Lebanon), in Iraq, even in Egypt, to say nothing of the frightening tension that persists between Israel and the Islamic republic.

We can thank President Rouhani and his foreign minister, Javad Zarif, for this. President Obama and Kerry were nowhere near this kind of demarche when Rouhani, newly elected, more or less forced it down Washington’s gullet last summer. Remember those days — the U.N. General Assembly speech and all that? History sometimes arrives on First Avenue.

We were supposed to suspect the Iranians and were told to do so long after it was necessary. Obama eventually put together a negotiating operation, headed by a State Department hack named Wendy Sherman. Sherman supplied one of the notable quotations of the time when she testified before Congress. “Deception is in their DNA,” she said of the Iranians. Slurs do not get more disgraceful, but off Sherman went to open talks with Tehran.

I say we can thank Rouhani because he has proven out. He and Zarif are serious statesmen with vision and they have their conservative opponents in line. And we will have to thank him again if a final deal comes through, because Congress is this far from passing a new round of deal-scuttling sanctions. The midweek count — one can scarcely believe it — has 59 senators, including 16 Democrats, calling for additional sanctions. The administration is right to call this “a march to war.”

Some of this goes to America’s fundamentalist streak, no less contemptible than Iran’s. But these people are merely crude. The more profound worry is the influence of AIPAC, the infamous Israel lobby. The lobby owns most of those votes. A circumstance anticipated in this column last summer comes to be: Israeli intervention  in the American political process now threatens to render the nation incapable of innovating out of a Middle East policy so outdated as to be dangerous — well, even more dangerous than it long has been.

When I think of U.S.-Israeli relations these days I find myself humming, “Something’s gotta give, something’s gotta give.” Something does, and it is likely to be the wrong thing — a deal with Iran essential to a livable future for the Middle East. May I prove dead wrong.

American media are far too frightened to call this as it is. The take-home: If the Iran negotiations crater, read the analysis of why with the greatest care. Or else do your reading in media other than American.

As to Syria, all sides now agree that the solution must be political, and this is reported as if it were always so. Less than six months ago, recall, Kerry wanted to shell Damascus. The Russians wanted politics rather than missiles, and thank goodness Vladimir Putin and his foreign minister, Sergei Lavrov, ran rings around Obama and Kerry (and still do, so far as I can make out).

A political solution is indeed the only serious game going, but it is questionable whether the U.S. will allow one to materialize. It is not truly what Kerry is talking about. Insisting that a transition to a post–Assad Syria is the starting point in Montreux only looks like a political solution. It leaves diplomatic sabotage available to U.S. negotiators at any moment they want to pull the lever. Russian commentators are convinced they will, possibly early in the proceedings.

You do not read much here about power sharing as an alternative, ugly duck as it would be. No one asks, “If not Assad, who?” No one asks whether “regime change” (contemptible euphemism) would come to any more than it has in Iraq. Or what can come of talks that exclude Iran (as Kerry insists they must). Or whether the Russians, Assad’s neighbors, might have a point about the dangers of instability and sectarian strife. You do not read this for the simple reason that Washington is not talking about these things at the moment. Were Washington to raise such matters, then you would read about them, simple as that.

Most of all, we read nothing as to why the Obama administration has chosen to demonize Assad. It deserves thought. Of all the despots Washington has nothing to say about, or supports, why single out Assad? It is a question, to take a ready example, whether he is any worse than the Egyptian generals whom the administration helped back into power last year. A lot of blood has spilled in Egypt since then.

The coup in Cairo leads to an answer. Washington backed Abdul Fattah el–Sisi, who now rules, in part (and maybe mostly) because Mohammad Morsi, the elected president, made Netanyahu nervous. In my view, it is the same in Syria as it was in Egypt and is now on the Iran question. The Israeli leader, who sabotages Damascus without hesitation, wants Assad gone. This explains — again, at least partly — why Kerry will place an unacceptable condition on the table in Montreux. It is another disturbing case of Washington’s failure to keep control of its own foreign policy.

We come to the single most consequential transgression American media have committed in many years. Last summer the New York Times reported without qualification that Assad was responsible for the gas attack that took the headlines from Aug. 21 onward. All others fell in line. This attack was, of course, the tripwire for an American military attack.

I am not certain many readers will have seen the Dec. 28 story in the Times. It had to retract the Assad-did-it thesis top to bottom, two scholars having shredded it. The piece was buried on the bottom of page 8, and the language is so contorted you can hardly make out what the Times is saying. Soviet citizens must have had this kind of difficulty sometimes with Pravda.

Refusing the orthodoxy on this question made for solitude when the weather was still warm. Everyone drank the Kool-Aid on this one. But the credit goes to others. Seymour Hersh, in his usual fashion, nailed it down to the ticking clocks and quotations from purloined intelligence documents. Interestingly, he published in the London Review of Books, not this side. Credit also to Robert Parry, another refugee from the big time, who continues to follow the story on his Consortiumnews.com.

At this point, I question anything Times correspondents write on Syria (which, OK, does not make Syria an exceptional case). And the echoes in history are too disturbing to ignore. In his LRB piece, Hersh drew a parallel with the Gulf of Tonkin incident in 1964, when the Times rested reporting on fiddled intel that justified bombing North Vietnam. Fifty years ago this spring, as the CIA prepared to depose Jacobo Arbenz, the Times wrote that little social-democratic Guatemala, desiring only to grow more corn for itself and fewer bananas for United Fruit, represented an imminent threat of Communist aggression across our hemisphere.

This piece began with the phrase “not yet.” It is my expression of optimism. In Iran as in Syria, diplomatic success still looks like a threat to a nation unaccustomed to any way other than its own; we cannot yet keep ourselves informed as to what we are doing in a region amid breathtaking change so long as we rely on our own newspapers.

My money is that we will miss the opportunities now open to us, opening the way for that “march to war.” Sooner or later this nation will learn. It is just that it will probably have to come the hard way. This has to pass as optimism these days.