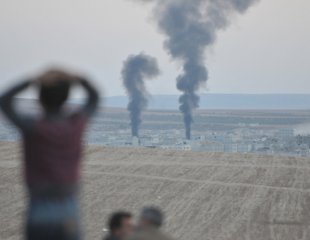 Is the U.S. About to Give Up on Its Lawless and Catastrophic Adventure in Syria?

The sooner the U.S. closes up shop in Syria, the better.

The crisis in Syria, now seven years running, is on the brink of a decisive turn. In a short while, the Assad government will either succeed or fail in its efforts to restore Syrian sovereignty in the most significant areas of the country, the U.S. will acknowledge its years of disastrous mistakes or drift toward more or less open intervention, and Israel will either escalate or reduce its long-running aggressions on Syrian soil.

It is now nearly three months since the Syrian Arab Army (SAA) drove the last Army of Islam jihadists from Eastern Ghouta, the Damascus suburb where scores of thousands were held prisoners, forced into basements, or shot if they availed of internationally agreed escape corridors. Those days in April are recalled now primarily for an alleged gas attack—the stated justification for a massive blitz of U.S., French, and British missiles that duly followed. It was a parting shot. Eastern Ghouta, free of Islamist radicals and returned to government control, is now calm for the first time in seven years.

Damascus now plans to accomplish to its south what it recently finished in Eastern Ghouta—cleaning out remnants of Islamist groups of various names and ever-shifting loyalties. This operation is now proceeding gradually.

Southwestern Syria borders Jordan and the Israeli-occupied Golan Heights—a critical feature of the geography: In advancing into the region, Syrian forces will be moving toward these frontiers. How will the Israelis react? What will the U.S. do? These are very large questions. There has been intense, little-reported diplomacy intended to avert an expanded conflict in recent weeks, but in the worst outcome—and it cannot be ruled out at this point—the SAA’s effort to restore national sovereignty could tip into a suddenly expanded war with Israeli and American forces.

The southwestern governorates have long provided the U.S. with passage into Syria via the Jordanian border. It was in the southwest, notably in the Dara’a governorate, that the CIA internationalized the conflict in its early stages by using Jordan as a conduit to arm jihadists; the region has been an Islamist stronghold ever since. Once Damascus regains control in the southwest, as now appears almost certain, the region will no longer be available as the vestibule through which Washington conducts an important part of its six-year intervention.

A third point by way of background. The southwest of Syria is covered by a de-escalation agreement Russia, the U.S., and Jordan signed a year ago. This accord, like all others like it, exempts militias fielded by the Islamic State, Jabhat al–Nusra, the Army of Islam, or any such terrorist groups, whose names and allegiances are frequently in flux. The southwestern governorates are reported to be thick with militias aligned with ISIS and al–Qaeda: This was recently confirmed by the Institute for the Study of War, the conservative Washington think tank.

Here we arrive at a couple of unpleasant truths. One, it is now beyond serious question that the U.S. has knowingly and opportunistically supported these jihadists for some years in its campaign to destabilize the Assad government. Ben Rhodes, a key adviser in the Obama White House, reluctantly acknowledged this in an interview The Intercept published on June 22. Anyone who has trouble with this reality, blurred as it is in the press reports, should recall the Carter administration in 1979, when Zbigniew Brzezinski got the White House to make life tough for the Soviets in Afghanistan by backing what became al–Qaeda. No surprises here, no original thinking—and no “moderate rebels.” Two, Israel, which prefers unstable Arab neighbors, has long found disruptive Islamists camped opposite the Golan Heights to be convenient buffers. Its support for them, in various forms, is an open secret.

Now you know why it is important to pay attention to Syria again, however difficult the Western press makes this. Here is how events have unfolded in recent weeks:

● Reports that pro-government forces were preparing an offensive into Dara’a and al–Quneitra, the adjacent governorate, began to surface in May, roughly a month after the SAA completed its operation in the Damascus suburbs. From the earliest of these reports it was clear the Assad government was making a considerable bet. It is unimaginable that Bashar al–Assad and his advisers were unaware that they risked provoking direct foreign intervention. Reflecting this, the SAA’s best-trained divisions are joined by various paramilitary units drawn from Homs, Aleppo, and other parts of Syria again under government control. Tank and artillery units have already begun shelling, and ground troops have split the region in two. Russian jets have provided air support since June 24.

● Soon after the SAA began to gather forces south of the capital, Iran’s ambassador in Jordan made a statement that must not be overlooked. In an interview with a Jordanian daily, Mojtaba Ferdowsipour declared that no Iranians would participate in the southwestern advance. This restraint—and Hezbollah appears to follow suit—reflects Russia’s assiduous rounds of multi-sided diplomacy in recent weeks. Given that any Iranian presence in the Dara’a and al–Quneitra campaign would be certain to trigger an Israeli response, a provocation is now avoided. In effect, Russia has negotiated what Israel has long wanted—a buffer zone opposite the Golan Heights that is free of Iranian activity.

● Soon after reports of Damascus’s plans, the U.S. State Department issued its first warning against “an impending Assad regime operation in southwest Syria.” It threatened “firm and appropriate measures in response.” Heather Nauert, the State Department spokesperson, reiterated this position in mid–June, although she left off the “firm and appropriate measures” phrase. We are presented with the bizarre spectacle of the U.S. threatening another nation for asserting control over its own territory.

● The de-escalation accord’s three signatories plus Israel tried this spring to mediate a settlement obviating the need for the Syrian army’s advance into the southwest. But the terror groups sheltering in the region have refused to countenance any terms this group has proposed. In a paper dated June 21, the International Crisis Group seemed to hold out hope that talks might eventually yield a result. But all reports I have seen subsequently suggest this is a forlorn expectation.

Roughly the same happened in Eastern Ghouta, we should note: In that case the Russians made assiduous efforts to broker an agreement between Damascus and the Army of Islam, the jihadist sect terrorizing the district. Some Islamist fighters retreated, but others either refused to negotiate or broke what agreements were reached. A lasting arrangement proved impossible, and the government assault followed.

For the moment there are few certainties as to the outcome in southwest Syria. Russia is the only nation that has working relations with all others involved—Syria, Iran, Israel, and the U.S.—and is talking to all sides. The International Crisis Group (ICG) report states that Washington “has signaled to its allies that it will not stand in the way of a deal for the southwest.” That was in mid–June. Such a deal would provide for the gradual restoration of Syrian sovereignty in the southwest and the reintegration of institutions, economies, and services. Washington has recently advised its “rebels” in the south that it will not counter the Syrian advance. “Damascus, Moscow, and Tehran,” the ICG notes, “all appear to understand Israel’s red lines.”

Well and good on paper. But there are indications all may be less well and good on the ground. When President Trump meets President Putin on July 16, as was just announced, Syria will top the list of the topics to be taken up. But the Trump administration’s Syria policy is nothing if not conflicted: While the president appears determined to withdraw from the conflict, some powerful constituencies in Washington show no such inclination.