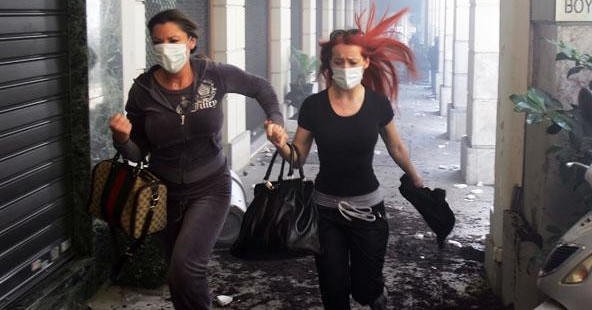 Maybe it had to come to this in Greece, given what the nation’s people are being asked to accept. On Wednesday, just days before a critical summit of European Union leaders intended to resolve the Eurozone crisis, two large unions launched a two-day general strike in Athens and other Greek cities. And it didn’t take long for things to turn violent.

In Athens alone, at least 100,000 people marched through the streets. While many demonstrators were peaceful, crowds that had gathered outside of parliament were soon enough hurling stones and petrol bombs at riot police—more than a dozen of whom were hospitalized. It is not known how many protesters were arrested. Shops, schools, and public transport were all shut down. Most flights in and out of Athens International Airport were canceled.

“The country is closed,” George S. Tsangarakis, whose business interests run from jewelry shops to shipping and bio-gas production, told The Fiscal Times in an interview yesterday. “Trading is closed.”

What occasioned Wednesday’s protest was the newest round of austerity cuts the government of Prime Minister George Papandreou has introduced in parliament. One calls for 30,000 public-sector jobs to be axed. To put this in perspective, the famously bloated Greek bureaucracy employs a total of nearly 800,000 people if you include companies, such as the electric power utility, in which the government owns majority shares. The cuts on the table now come to about 4 percent of the public-sector workforce.

But this comes after nearly two years of austerity measures, and it’s too much pain too soon. You could see danger ahead last summer, when Papandreou resumed his effort to push through a long line of austerity measures demanded as part of a multilateral rescue package the country desperately needs. Without assistance, Greece is scheduled to run out of money in about a month.

The reality is that there are other ways to address this mess, and we will have to wait until Sunday to see what E.U. leaders come up with. The austerity measures are unavoidable—even most Greeks acknowledge this—but they can be stretched out to reduce the social consequences. All that is needed is for Greece’s creditors, notably private bondholders and banks, to extend out repayment schedules, too. Every lender gets paid back; they simply don’t get paid when they thought they would.

Papandreou is clearly in political trouble this time. The irony is that as a Socialist he is probably Europe’s best bet as a leader who can maintain at least minimal political support while making his electorate swallow hard. The big questions today are two. First, what are we in for Thursday, the second day of the nationwide strike? Second, how will the violence in Greece affect the E.U. summit this weekend?