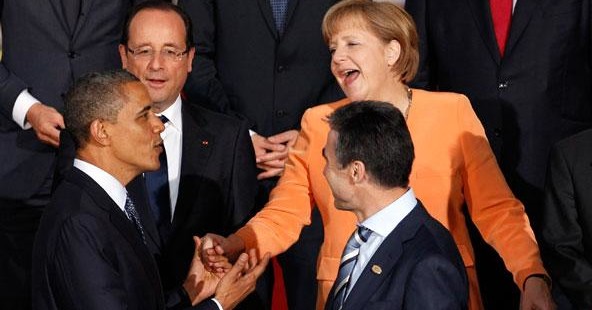 How the Spooks Will Sink the Trade Pact with Europe

It is supposed to be the largest trade agreement ever forged between two countries. But the Trans–Atlantic Trade and Investment Partnership never looked promising. And now that the US and Europe have completed a first round of talks, it is possible to predict with confidence that it will never see the light of day.

The timing did it. European Union and American negotiators wrapped up their opening encounter in Washington 10 days ago, just when many Europeans were reacting—with proper disgust, fair to say—to revelations of the National Security Agency’s astonishing intrusions into everybody’s data and telephone networks.

Talk about shooting yourself in the foot. The trade folk want one thing and the spooks cannot undercut them quickly enough. Given that communications and privacy regulations are on the trade talkers’ agenda, a pact that is supposed to liberalize commerce now inserts Americans into European politics, history, sovereignty, security, cultural values. It is no longer a “go,” if ever it was.

Dan Mullaney, the chief American negotiator, said last week that Washington considers it “important that we arrive at a deal quickly.” By this the Americans mean the end of 2014. While that date was always unlikely, the NSA’s wall-to-wall approach to spying now dooms the whole proposition.

The US–EU deal has had its cheering sections in Brussels and elsewhere in Europe since the idea was mooted nearly two decades ago. This is no surprise. It is intended to cover $2.63 billion worth of trade in goods and services daily and boost and sustain jobs and economic growth.
But to understand the proposed agreement, and to grasp why it seemed fated from the first, you have to know that Washington has always been the suitor. And Washington is not too gifted when it comes to thinking these things through.

MY WAY OR THE HIGHWAY
Washington’s idea of a trade deal is that everybody at the table agrees to do things Washington’s way. You can read this between the lines of the White House release on the pact. This was the “globalization” story in the 1990s, too: Scrub all local interests, the neoliberal troops are arriving. There can be but one exception: the Americans themselves. They do not like, say, farm subsidies (cotton, sugar), but they spend a lot of money on the corporations they call “farmers.”

Watch for the same thing, by the way, with the Trans–Pacific Partnership, a similar concept across the other ocean. Until just recently, the only ones willing to talk about the TPP were the small nations the US often attracts like pilot fish. Japan recently agreed to come on board, but this matters not. Tokyo always does what Washington tells it to do. Other Asians know this. The TPP is unlikely to go any further than the sought-after undertaking with the EU.

There were plenty of signs that writing a trade pact with the EU was going to be problematic. There is the general difficulty of what the trade crowd calls “regulatory coherence.” Here is what Pascal Lamy, the outgoing director of the (greatly dysfunctional) World Trade Organization, said about itin an interview with the Financial Times just a few days ago:

Not a lot of coherence around on the trade side, it seems.

HOLD THE HORMONES, S’IL VOUS PLAIT
Regulatory coherence is a kind of umbrella thought, under which you find all manner of knotty things. Europeans eat differently from Americans. They are suspicious of hormones and genetic modification and they like their expensive, artisanal treats. The US cannot, and should not expect, to change all this.

Financial services regulation? It is so fraught that the Americans do not even want it on the agenda. So it is the elephant in the living room. Mullaney now says the NSA question will also be dealt with outside the framework of the pact. What was this agreement meant to cover again?

Other questions have been around for ages: The French and their films and cultural products is a famous one. Paris will not cave on this, and it is right. Who says a work of art is no good or somehow “not fair” unless it submits to the market? There is nothing in human history to support this thought, beyond a few people in Los Angeles and their lobbyists. Subsidizing artists of all sorts goes back at least to the Renaissance. It is Caravaggio vs. “Rambo 9” or whatever.

Tough enough, all that. But the high-tech spying is the clincher. This takes the proposed “partnership” well beyond trade and markets. Is Washington planning to write different historical experiences and different concepts of human dignity into an agreement to liberalize commerce?

General Keith Alexander, America’s eavesdropper-in-chief, has been powering on lately, plainly with no thought of anybody else’s negotiations with Europeans. He is now advancing a vigorous defense of the data-gathering program launched after the September 11 attacks in 2001. He cites “logistics,” “costs,” “speed,” and other such things to conclude that any but minor adjustments will be “a significant problem” for the NSA.

Equally, the internet companies now known to be so accommodating to the NSA are lobbying against any change in the agency’s brief, arguing that it would disrupt their business model. Abusing constitutional rights turns out to be profitable. One can see where this is going.

ELIMINATING AN INFESTATION OF ‘BUGS’
But it is going nowhere in Europe, where individual privacy is not as negotiable as Americans consider it. It is not that European security services are shy of spying. They are not by a long way. It is that European history and political traditions have made the Continent more vigorous in the protection of constitutional rights.

The fire is burning hottest in Germany, where Chancellor Angela Merkel faces an election come September. Her Social Democratic adversaries have already made politics out of the data-protection issue, accusing the chancellor (who was born in East Germany) of failing in her sworn duty “to prevent harm to the German people.”

The German case is especially touchy, given the nation’s Nazi past and then the Communist era, when the Stasi, the secret police, had practically everybody spying on everybody else. But Merkel’s bureaucrats are about to start drafting regulations modeled on Germany’s tough code and applicable to the 28–nation EU bloc. Senior Brussels officials instantly endorsed the chancellor’s plans.

Only the British and Irish seem to side with the Americans on this one. And that will not be enough to get a trade pact signed with mutually acceptable privacy regulations written into it.

But this is a train wreck waiting to happen. In the end, the talks just begun (and due to resume in October) will signal not closeness across a shared ocean but the widening distance between Americans and Europeans. I see at most an agreement for the sake of an agreement, one that will change next to nothing.

← They still hate us: No one wants to be America, anymore
A threat Israel must listen to →