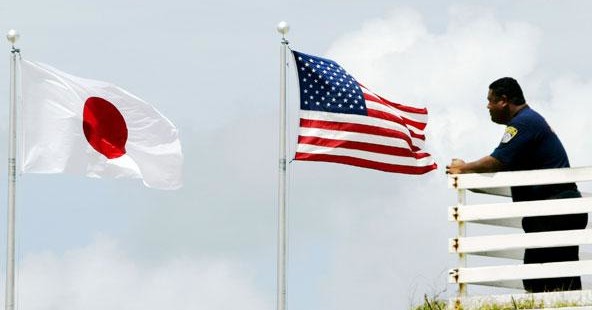 How a Resurgent Japan Puts Washington on the Spot

“Japan is back.” That was the message Shinzo Abe, the new Japanese prime minister, delivered to President Barack Obama at the White House a few days ago. Obama, in turn, made nice, praising the US–Japan alliance as “the central foundation for our regional security.” All very cozy.

Except for one thing. The timing of Abe’s leap onto the stage could scarcely be worse from Washington’s point of view. A militarily resurgent Japan, which is a big part of what Abe is talking about, is certain to provoke China, undermine Washington’s claim to be a “balancer” in the region, and make it more difficult than it already is for the US to come to workable terms with China as a regional power. Remember, that alliance obliges the US to aid Japan in any security-related engagement.

Just to give you an idea of how hot the potato is, take a look at the Chinese press, which sprung into action before Abe had even left Washington. Abe’s “ulterior motives,”  the Global Times reported, were to drag the US into the Sino–Japanese dispute over islands Japan controls in the East China Sea. Here is the People’s Daily in an editorial: “US support for Japan on the issue would not only damage Washington’s credibility as a constructive superpower, but also as an important partner of China on many pressing global issues.”

Abe, who is an extreme nationalist in the 1950s mold, has made it a point to accompany his “reemergence” campaign with courteous signals to his neighbors. Yes, he will talk to the Koreans about yet another island dispute. Yes, he will meet Chinese leaders on the Senkakus, as the East China Sea islands are called (Diaoyus to the Chinese). He is not clumsy as a diplomat, not on either side of the Pacific: “I have absolutely no intention to climb up the escalation ladder,” he said in Washington.

But look what Abe is doing along with the gestures. He wants to raise Japan’s defense budget for the first time in 11 years. He wants to revise the constitution to remove the “no war” clause that has been at the core of it since it was written (by Americans) in 1947. He is thinking of disavowing apologies Japan has extended for the use of “comfort women,” or forced prostitutes, during World War II. And while he will talk to Beijing about the Senkakus, he has made clear he has no intention of discussing sovereignty—as if there is anything else to talk about.

These are interpreted as bluntly provocative policies among Japan’s neighbors. They are the affronts of an old-line nationalist hawk—not what Asia—or the US—needs from Japan in the 21st century.

Abe’s ideas create a huge irony for Americans. We have badgered, cajoled, insulted, and bullied the Japanese since the 1980s to “do more,” to take a bigger role in regional security, and to stop mooching off the Pentagon. And now we are getting the Japan we have wanted for so long. Instantly and inexorably, the longstanding alienation between Beijing and Tokyo is drawing Washington into it. The Chinese want to know why the US will not talk to them about the islands dispute. It is a good question for any nation that proposes to be the big balancer.

Abe is not doing Obama any favors, in the meantime, on what is called the Trans–Pacific Partnership. This was part of the Japanese leader’s talks with Obama, too.

The TPP is a regional trade pact quite like the US–European deal that has just been brought to the front burner. Both of these FTAs, or free trade agreements, have the same problem. They are Trojan horses for the imposition of American neoliberal economic values on continents that think differently on such matters.

This column has already suggested that the US–EU pact has a slim chance of passing. The TPP is not a horse you want to bet on, either. The Chinese, needless to say, take it as the economic equivalent of what they think is an American effort to surround them militarily. So it simply adds to the alienation. In this way, Washington could stand to be more sensitive as to the impact of its campaign for the TPP, perhaps letting it drop for a good, long time.

As to Abe, you have to smile and say, “plus ça change.” He is all for a reinvigorated alliance with the US, but as a Liberal Democrat he is almost as dependent on support from Japanese rice farmers as all of his LDP predecessors. In a joint statement with Obama on the TPP, Abe allowed that “all goods would be subject to negotiation.” But he also got it out of Obama to agree, “It is not required to make a prior commitment to unilaterally eliminate all tariffs.”

“It is my understanding that giving up all ‘sacred areas’ is not a pre-condition,” Abe said afterward. The rice growers back in the solidly LDP prefectures must be pleased.

Abe brings Washington to a key moment for its most ambitious FTA. Japan would be the biggest nation by far to join; at the moment the signatories are all minor players. But if he presses his insistence on exceptions, everyone else will want theirs, too. And the TPP will come to little.

Japan is a friend to the US. But with a right-wing conservative flexing his muscles in the prime minister’s office, it is a friendship that brings its liabilities. They will prove serious impediments as Washington seeks to renovate its Asia policies.

Footnote: It is interesting to review the transcript  of the public remarks Abe and Obama made in the Oval Office after their meeting. They mentioned North Korea, they mentioned Afghanistan, and they mentioned the BP gas plant in Algeria, among other things. Not one reference to China, the largest issue between the two leaders by many magnitudes. Draw your own conclusions.