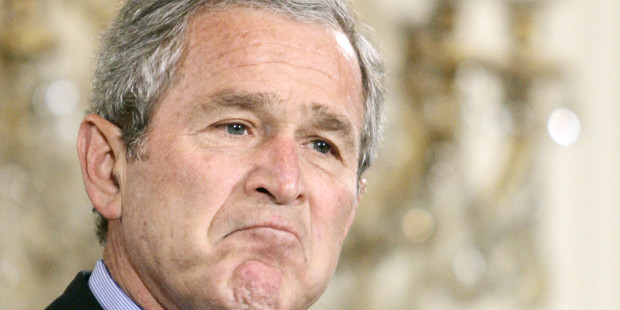 Eleven years, and so much death, misery and destruction later, Iraq’s best outcome looks like the one Bush upended

Foreign policy, at least the American kind, is like a stone thrown into a pond: The ripples outward go on and on. You have to think about the tragedy now unfolding in Iraq with this in mind.

It is tempting to say the surge of horrifically righteous Sunni armies southward from the Syrian border is unbelievable except that you cannot: It is all-too-horribly believable. The rings of sectarian violence — including mass murder, if news reports prove correct — are the predictable consequence of decisions made during the Bush II years. This mess has American signatures on it in indelible ink.

Since we are at it, as those ripples are circular, we now come full circle in Iraq. No one wants to say it, so let’s say it here: The project now, best outcome, is to reassemble the Iraq of Saddam Hussein — uneasy with itself, brimming with animosities, but whole. This is the Iraq George W. Bush set out to destroy — purposely but without purpose, if you see what I mean. He did, swiftly. And now by any other name we want it back.

There may be other contenders, but this looks to me like the bitterest moment so far in our century.

First thought. What under the sun are the families of the 4,000 fallen Americans saying to themselves as everything their sons, daughters, siblings and spouses gave their lives for, or thought they risked their lives for, comes to absolutely nothing? The grandest illusions cannot hold in the face of the headlines now.

Make that second thought. First goes to the Iraqis who have survived untold deaths around them and the loss of homes, communities, jobs, educations, health and altogether their futures. This must mean most Iraqis by now.

In 11 years, our nine-year war has created a nation of destitutes, exiles and wanderers. It is a kind of death in life — worse (might as well say this, too) than many things Saddam was guilty of. And the truly incredible stares at us: There may be worse to come, if the Islamic State in Iraq and Syria lives down to the word of its leaders so far.

What are our policy cliques and the makers of the intellectual mulch fertilizing them — the think tank set, the professors, the journalists and so on — going to take from this stunning turn in Iraq’s misfortunes? This is the question now, even as the facts on the ground move at a speed that startles everyone, including the ISIS armies pressing toward Baghdad.

If the past is any guide, Washington is almost certain to proceed toward the same goals with minor variations in strategy, true. This promises senselessness piled atop itself.

But it is important to consider the lessons, even if the likelihood of Washington learning any is slim to nonexistent, because the renewed crisis in Iraq strips bare the bankruptcy of standing American policies in the Middle East.

Post-Cold War Washington has just hit a wall, and it is important to recognize this. The Middle East happens to be the locale, but others await.

The project the Bush administration defined when authorizing the invasion of spring 2003 was to democratize the Middle East. Iraq was to be the cornerstone of this strategic effort. It was neo-Wilsonianism in very pure form, and as such fated from the first to fail. It is hard to see how people such as Condoleezza Rice, the Bush administration’s quintessential nation-builder, can any longer argue the prospect of even marginal good.

But there is a positive side to this debacle, and I say this having chicken-scratched to find one. It is that the thought of a fundamental rethink stands to gain adherents in high places. I admit this has to go in the fat, rarely disturbed file marked “Best Outcomes,” but I stay with this: No new idea has ever been other than far-fetched, this by definition. Were it perfectly realistic, it would not be new.

My fondest hope is that one of our very oldest ideas now teeters near collapse. I have already mentioned it: It is the evangelism named in the last century (and hatched by a Presbyterian minister’s son) as Wilsonianism. Put this in the past and we will instantly make the world none other than safer.

There is a lesson here that draws from the more recent past. I have taken to naming it the Tito Thesis.

Remember Marshal Tito? He was a distinguished anti-Nazi German partisan and went on to govern Yugoslavia from 1953 until his death in 1980. He was commonly demonized as another East European despot, but in the upper reaches it was understood to be more complex. Tito stood among those flawed giants of the independence generation: Mossadegh, Sukarno, the four “Ns,” as I call them — Nehru, Nasser, Nyerere, Nkrumah. He stood up to the Soviets as well as the Americans, and his true sin, as with the others, was his insistent non-alignment.

Tito was tough when he had to be, which was often. But he kept Yugoslavia Yugoslavia, primarily by making sure all the bitter communal animosities were balanced in the sharing of power. Anyone who had no taste for Tito might look to what came after him and consider the man again.

The thesis is simply stated, then. Strongmen are sometimes strongmen for a reason, and they are not to be fooled with capriciously, and certainly not without a thorough analysis of what is likely to follow.

Take the Tito Thesis to Iraq and where does it land you? This is bitter indeed, especially at our moment, but it forces reconsideration of Saddam. I know no one inclined to apologize for his numerous cruelties against the Kurds and the Shiite majority, among much else. But he kept Iraq Iraq, under the Ba’athists’ secular ideology (a variant of Nasserite socialism).

I can hardly make my fingers move across the keys as I ask this: Better or worse, what Americans did to post-Saddam Iraq? All the sectarian viciousness was there to see as Bush sent the troops into battle. But Bush was all ideological fervor, little thought. There was no apparent understanding of the snakes that were to crawl out of the baskets.

As to Nuri al-Maliki and his brand of Shiite chauvinism, I do not see he meets Tito Thesis standards. He is now in a very bad place, and having landed him in it Washington may owe him something. Obama’s best move would be to pay on this debt only when al-Maliki begins unity negotiations — not just with the Kurds but with credible representatives of the Shiites, irrespective of al-Maliki’s taste (or Washington’s) for what they will bring to the table.

Applying the thesis elsewhere, as long as we are at it: Back off in Syria, and accept the words often issuing from Secretary of State John Kerry’s mouth (and the mouths of many others): The only solution is political. The reality may again seem grim, but we ought to know by now there is grim and grimmer. Assad has his uses in the face of rampant sectarianism among the splintered forces opposing him. He is an Alawite, of a branch of Shia Islam, but he has a long secularist tradition behind him — Ba’athist, like Iraq’s.

This current phase of the Iraq crisis leads down two paths, at least for me. On one, the guide is Ernest Renan, the 19th century French historian. Author of a history of the Jewish people and many other works, he is best known now for a lecture delivered at the Sorbonne in 1882. He called it “What Is a Nation?” and offered his answer.

“Confounding race and nation,” he asserted, was “the error most grave.” So was any thought that language or religion or even natural boundaries had anything to do with it, he went on to argue. A nation consisted of “a daily plebiscite” — his most famous phrase, meaning a profession of belonging each citizen makes by way of his or her participation in everyday living.

The pre-Revolutionary powers of the Roman church gave the French their obsession with laïcité, as they call their vigorous (too, in my view) insistence that government must be sequestered from religion and vice versa. No surprise, then, that it was a French scholar, not quite a century after 1789, who made this compelling argument for secularism.

It holds. It informs one’s thinking about the Middle East, including the Israeli-Palestinian question. But Renan missed something, a reflection of his time, and in ours we must not. Secularism is a great value, but as a principle beyond question it is a Western value. There is a history of secularism in the Middle East, but there are histories of other lines of thought, too.

So to the other path. The American habit of imposing its democratic model elsewhere has been objectionable from the start. It has just reached the high point of its ruinousness. America’s authorship of the long Iraqi tragedy tells us this as we speak.

The Islamic world’s great challenge spreads across it. It is how to shape emergent democracy in a civilization that shares no insistence on the separation of church and state. A kind of secularism may well emerge, but it will be different everywhere and unlikely to resemble France’s or ours (which are very different between them, indeed).

What place does America or the rest of the West have in this endeavor, historical in magnitude as it is? It is attenuated at best and would require a degree of disinterest we Westerners are nowhere near mastering. We have to face this now and find answers: This is the message from the crackup in Iraq. As already suggested, if our answers are to be useful they cannot be familiar, for they have to be new.

Robert Fisk, the noted Middle East commentator for the Independent, the British daily, published an extraordinary piece a few days ago. You get the full picture of just how far beyond the American grip the Middle East slips by the day.

Out of Sunni solidarity, our fast friends the Saudis are bankrolling the ISIS and its dream of a revived caliphate across Iraq and Syria, Fisk tells us. The (Sunni) Qataris may soon switch their financial backing from Sunni insurgents in Syria to none other than (Alawite) Assad, because the Saudis, although Sunni — are you following? — are a threat to the (Sunni) Qataris. Washington is inclined to support the (Shiite) al-Maliki in Iraq as he proceeds against Sunni insurgents, but it still proposes to topple (Alawite) Assad as he proceeds against Sunni insurgents.

Apologies for the density of the above paragraph, but it goes straight to the point.

A flickering light at the end.

At writing the news media report that Washington is now seriously considering opening talks with Iran with a view to some form of collaboration in Iraq, where the (Shiite) Iranians support the (Shiite) al-Maliki. As noted, I see no sense in supporting al-Maliki short of a highly persuasive demonstration — quickly, as in now — of a commitment to all-parties talks. However, the thought of the Obama administration drawing closer to Iran in small recognition of shared interests delights me.