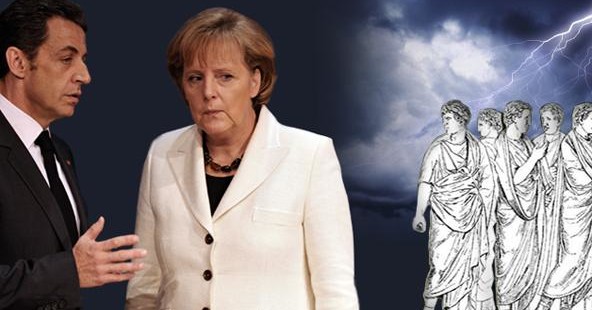 Euro Crisis: How to Stop the Contagion

Even a couple of months ago, the idea that Greece would be forced to default on its debt and exit the eurozone seemed some kind of distant horror. Now both seem all too near as possibilities. What was a short while ago considered a crisis among the profligate Mediterranean members of the European Union is now a European crisis, reaching to the stronger core by way of the institutions that hold Greek debt. And as the U.S. has started to make clear, Europe’s crisis threatens to become the planet’s.

It is the opposite of the 2008 crisis, when the U.S. was the source of contagion. Much of the talk in recent days has been dire, just as it was three years ago in the U.S. There are a hundred knowledgeable voices with as many thoughts as to what the Europeans should do.

Greece’s best option, some say, is an orderly default. That would at least focus minds, among other things. It should at that point exit the euro and return to the drachma as a national currency, others add. “Europe” as a concept is over, still other commentators throw in as a corollary. It is time to think of what comes after Europe – or the 60-year-old vision of a united Europe — finally dims for the last time and cannot flicker back to life.

There is no question that Europe as a whole is now in a crisis that no one imagined would reach these proportions even last summer. But it is too easy to be overly alarmist. Yes, there are worst-case outcomes out there in the near distance. But there are solutions that bring us quite quickly to a better place. A Greek exit from the euro and the gradual dissolution of the currency as others — Portugal, for instance — are forced at some point to follow suit is not an inevitability.

Still, tough decisions must be made, and made quickly, and some involve extreme measures. Here are a few of them:

Note what is absent from this list: a Greek exit from the euro. While some commentators assert that this is a natural follow-on after a default, that would be so only if the ECB declined to recapitalize Greek banks. There is otherwise no need for Greece to drop out of the eurozone and plenty of reasons for it to remain within it. Returning to the drachma would re-introduce the very currency risk the euro was intended to eliminate; legally, it would oblige Greece to quit the EU itself, and it would risk horrific overnight bank runs. Finally, it would be unnecessarily painful for the financial institutions holding Greek debt (not that one’s heart bleeds first for them).

The latest phase in the Greek crisis brings the truly significant point of a new strategy straight to the center of the table. It is the salvation of the EU itself that is now at stake. Were Greece to drop the euro and leave the EU as a consequence, it could well prove the beginning of the end of the Continent’s common currency. That would be a tragedy. The euro is not the end of the European story. But it is the capstone of decades of visionary work in drawing Europe closer together than it has ever before been in history. Now is not the time to blink, dither, or turn back.

← Europe: The Strings Attached to a Chinese Bailout
Why America Isn’t Headed for a ‘Lost Decade’ →