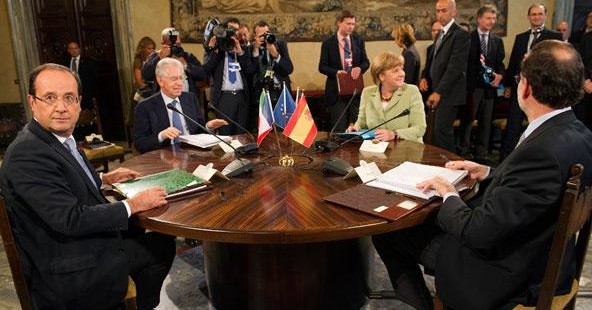 The earth’s core was exposed this week – it’s called the world’s central banks. The European Central Bank, the People’s Bank of China and the Bank of England all unveiled easier monetary policies of one kind or another. Denmark, which is not a member of the eurozone, actually announced that its central bank would offer a negative interest rate—a first in history. All of these moves are intended to make money cheaper and encourage bank lending to businesses, households, and other financial institutions.

Given that these policies came within an hour of each other but were not coordinated, there can hardly be a clearer sign that the global economy is in trouble—collective trouble. Now we have to watch the Fed in Washington.  Friday’s weak jobs report suggests that the U.S. will soon join the crowd and further ease monetary policy. Fed Chairman Ben Bernanke is due to address Congress at mid-month; the next Fed policy meeting comes at month’s end, and Bernanke is on the record saying the Fed will do whatever it takes.

RELATED:  How the EU Got Its Mojo Back: 19 Summits Later

So where are the cheers? There have been murmurings of approval at best and at worst signs of renewed crisis and more pessimism. Benchmark borrowing rates in Spain spiked to 6.78 percent after the ECB announced its monetary easing. That is very near the 7 percent bailout zone. The New York market  dropped nearly 124 points on the weak employment data, suggesting investors are beginning to give up on any thoughts of a vigorous recovery gradually gathering steam.

It is well enough that central banks recognize the need for action in an economic environment ever more commonly being called“a contained depression.” But central banks do not have the tools to build comprehensive responses to deep recessions. At the moment we have this, in one form or another, across most of the planet: tight fiscal policies (meaning austerity), and loose monetary policies (meaning easy money to institutions). But these policies do not work to any meaningful degree.

Here is what the central banks did toward the end of last week:

• The European Central Bank cut its principal interest rate to 0.75 percent, down a quarter of a point and a record low for the ECB The bank’s president, Mario Draghi, said the move reflected “heightened uncertainty weighing on confidence and sentiment.”

• The Bank of England, with its interest rates already at historic lows, injected an additional $77 billion into its bond-buying efforts. The BoE is thus raising its spending on “quantitative easing,” to $581 billion over the past four years. This follows a government announcement in mid-June of a $217 billion plan called “funding for lending,” which is also intended to encourage banks to extend credit to individuals and businesses.

• The People’s Bank of China reduced its one-year lending rate by about one-third of a point, to 6 percent. Its deposit rate dropped to 3 percent. Interestingly, Beijing had to accompany its announcement of lower rates with a warning to banks not to use easier money to fuel property speculation. We should all join in wishing the PBoC good luck in this latter regard.

• Finally, the Danes. They took the unprecedented step of moving the central bank’s deposit rate below zero. There is now a charge of 0.2 percent on bank deposits in the Danmarks Nationalbanken—meaning it is literally cheaper to lend funds than to hold them on deposit.

What, then, is wrong with all this? Nothing, but that is the wrong question. The question is, Why is all this not enough?

The Brits gave us an answer when their chancellor of the exchequer, George Osborne, announced the “funding for lending” experiment last month. You could practically hear the bowler-hatted gents in the City of London asking, ‘What good does this do?’ What business is going to borrow to rev up production in this environment? What household wants to take out a loan to buy a new what’s-it when the breadwinner may not be working next month?

Central bank actions such as these just taken do no harm. They are indeed well-intentioned. But to rely upon them to salvage wrecked economies is like serving the salad as the main course. Central bank policies have their roots in supply-side economics. They address the question of availability—in these kinds of cases, the availability of funds. They have nothing to say about the demand side of a troubled economy. And that is where the planet is now ailing.

There has been talk among central bankers over the past few days that with this latest round of central bank measures it is time for political leaders to step in and hold the reins. This goes straight to the point. Monetary policy has been popular over the past several years because it is the least political of approaches. It has been one very large reason U.S. politicians have been able to avoid the hard work of thrashing out policies that would get people back to work—policies that, in some countries, bear political risks.

We are all set now so far as cheap money is concerned. It does not get any cheaper. Now we need to take steps that encourage ways for people to earn it, while also creating an environment in which businesses and households will borrow it. We’re not there yet, and time is running out.