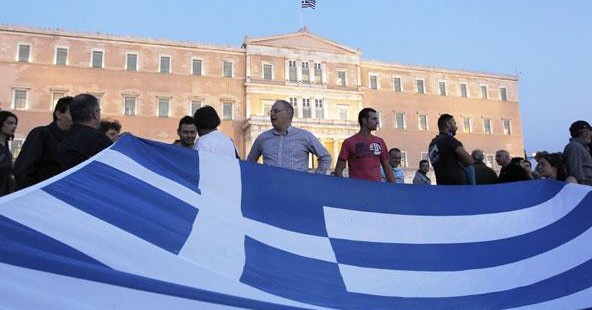 Why Greece Should Consider a Eurozone ‘Grexit’

Slower than a roller coaster but faster than a glacier, Europe advances toward a denouement on the Greek questions—and there are several at this point. Fearful of the answers, Europeans are doing what they seem to do best, which is dithering. It can’t hold much longer as deadlines approach.

• Can Athens, Brussels, and the European Central Bank in Frankfurt—and the Merkel government, to get straight to the point—reach a deal that allows Greece to pay its debts (some far-off day) and return to economic health?

• Will any such deal require a significant rethink of repayment terms as they now stand? If so, how significant will “significant” turn out to be?

• Absent any such agreement, is Greece’s exit from the eurozone inevitable even if few are yet prepared to say so? Is Grexit, indeed, shaping up as desirable?

• Finally, the big one, the one we should all think about: Is the European Union capable of accommodating an alternative economic model, one at variance with the prevailing neoliberalism, among its members?

We can look at these one at a time, but here’s my executive summary: Things have gone badly—or nowhere, maybe—since Alexis Tsipras and Syriza, his vigorously anti-austerity party, formed a government in January. In consequence, it’ll be best for all concerned if Greece bails out of the eurozone.

Don’t dare call this pessimism. Better to look for the optimism buried within the apparent pessimism, and there is some.

Last Thursday, after ransacking its cupboard, Athens made a scheduled payment of $476 million, to the International Monetary Fund. The bond markets exhaled deeply; yields on 10-year notes tumbled 18 basis points.

But this still prices 10-year Greek debt at 11.03 percent, and Athens has bought very little time: It faces a total of $22.5 billion in payments this year. The numbers make the point: The status quo is not tenable no matter how you slice the souvlaki. Leave things as they are and you have a nation of 11 million no-hopers.

Question 1: Yes, the E.U. and Athens can reach a deal, if only in theory. But this isn’t a technocratic question. It’s a political question and has been from the first.

Unable to bend even a tick in Greece’s direction in recognition of the economic and social calamity current bailout terms have created, European ministers have taken to calling for Tsipras to ditch his left wing and form a centrist government—roughly along the lines, let’s say, of Prime Minister Matteo Renzi’s in Italy.

This sort of intervention is unseemly, reflecting far worse on the E.U. than on Tsipras and the many hues of red and pink in his party. In effect, Europe is saying it accepts democratic process among member states only when it finds the result agreeable. Preposterous.

Question 2: Yes, getting Greece back on its feet within the eurozone requires a very big rethink, and it’s no good shoving the entire obligation on the Greeks. At this point Brussels and Frankfurt must acknowledge error and alter course, too. For the 55th time, this is a European crisis, not Greece’s crisis alone.

Last week, none other than Reza Moghadam, formerly head of the IMF’s European department and now a vice-chairman at Morgan Stanley, suggested a way to make this possible. Strip back “conditionality” to a few essential reforms, he wrote in an opinion-page essay for the Financial Times, refinance debt due immediately until summer’s end, and negotiate a restructuring of the rest in the interim.

Related: Greece Needs Deal on with Lenders on April 24

Given the E.U. prefers to dither rather than accept even this, the conversation has to take a new turn.

Question 3: No, a Greek exit from the eurozone isn’t inevitable, but—and this is a first for this column—it shapes up as desirable.

Valéry Giscard d’Estaing, one of the euro’s architects, made this argument months ago. “The fundamental question is whether or not the Greek economy can recover and prosper with a currency as strong as the euro,” the former French president said in a February interview with Les Echos, the Paris business daily. “The answer is clearly negative. Greece needs to be able to devalue its currency.”

Giscard called for “a friendly exit,” leaving the door open to a reentry under more propitious circumstances at some future date. “It would be absurd to say this is a failure of Europe,” he added. “Greece still has its place in the European Union.”

Giscard’s opinion rests on Greek competitiveness. Mine’s more purely political. If the E.U. requires the Tsipras government either to accept punishing bailout terms or to remain answerable to his electorate, he must choose the latter—for the sake of Greeks and the rest of Europe, as well.

Related: Greece Tells Creditors It Will Run Out of Cash on April 9

A European project that, stripped bare, operates in opposition to democratic values is of no use to anybody. And given the current climate on Europe’s southern rim, it doesn’t have a prayer in the long term. Herein lies my optimism: Better to shut this down, if it comes to it, and preserve Europe’s democratic tradition: It’s simply nonnegotiable.

Question 4: Sometimes a philosophic inquiry bears very practical consequences, and this is one of them. At this point, the E.U. proves unable to accept a member state’s alternative to the neoliberal orthodoxy entrenched among the technocrats and politicians in Brussels and Germany.

Credit to Martin Sandbu, the FT’s Free Lunch columnist, for marinating the question last week. As he points out, Tsipras has so far operated on the “yes” side: Yes, we can serve Greeks a mélange of Keynesian stimulus and left social democracy and remain in the eurozone.

James K. Galbraith, the U.T. Austin professor and a close friend of Greek Finance Minister Yanis Varoufakis, wants to think the “pragmatic interventions” of Chancellor Merkel — “someone for whom I don’t ordinarily offer a great deal of effusive praise”— signal an imminent turn in European thinking.

Well, Tsipras has so far broken his pick in his talks with the Europeans. They’ve gone nowhere, even as Greece teeters. And to Galbraith I offer that famous last line in Hemingway’s The Sun Also Rises: “Isn’t it pretty to think so?”