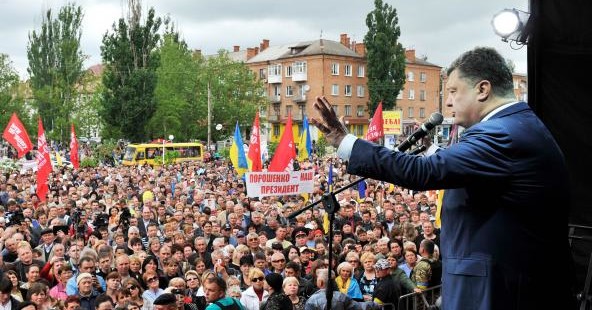 The referendums in Ukraine almost nobody wanted are now part of the story, and they have little meaning but some significance. Let’s explore the difference.

One way or another, the two votes on Sunday bring the nation a step further toward a resolution of its crisis. This is significant.

As expected, those who participated appeared late Sunday to have said “yes” to the referendums’ question by a wide margin. This changes almost nothing, for the result only pretends to tell the world anything about what those in Ukraine’s eastern regions think or want.

Related: Four Reasons Why Putin Pulled Back His Troops

While those who organized the polls in the Donetsk and Luhansk regions plainly took a page from the referendum in Crimea held in March, they are in no ways comparable. These votes took place in something close to siege conditions and under no official auspices. Everything from the polling booths to the ballots and the monitoring was makeshift.

Two regions controlled in some places by militias opposed to the provisional government in Kiev, in others by Kiev’s troops, have no means now of doing anything about the outcome.

Most important is those polled were not asked if they wanted independence, or Russia to annex their regions, if they wanted to remain unified under a government in Kiev, or if they wanted some form of autonomy or federalism.

Related: If Russia Goes Over the Economic Cliff, It Won’t Go Alone

Setting aside any endorsement of the “people’s republic” entities—and that would be implied, not explicit—it comes down to anyone’s definition of “the act of self-rule,” which, in turn, comes down to democracy and how it should be administered.

As Sunday’s voting drew to a close, some organizers promised an independent state with its own institutions, armed forces, and all the fixings. “Another,” Reuters reported, “said the vote would not change the region’s status but simply show that the east wanted to decide its own fate, whether in Ukraine, on its own, or as part of Russia.”

I am with another: Those who voted want a say in their future and do not think the provisionals in Kiev offer them one, full stop. No startling news.

In my view, these crude exercises in direct democracy will do a lot less harm than almost all onlookers assumed. No need to panic: We go on from here. Crucially, the Kiev government is neither more nor less legitimate than it was on Saturday (which is to say, not very).

Having heard from the people’s republics, the world knows some things it did not before the weekend.

For starters, the assertion that Vladimir Putin is the master puppeteer in eastern Ukraine is now too flimsy to hold up. The Russian leader publicly urged pro-Russian Ukrainians to stand back from the referendums last week; they pointedly responded they take no orders from Moscow, and now they have proven their point.

The media have their shorts in a twist over this. “It remains unclear what Mr. Putin’s motives were for suggesting a delay,” The New York Times reported from Donetsk (a city as well as a region) on Sunday.

Sometimes a cigar is just a cigar, you have to say in response. Putin has for weeks called for multi-sided mediation and an end to provocations; and sloppy referendums could not possibly serve his interests. He does not want to move troops into Ukraine to keep his promise to protect Russians and Russian interests.

The important thing to watch in the next few days is how Putin responds to the outcome of the referendum votes.

Again, it looks already as if the media are manufacturing mystery where there is none. “One thing is certain,” Terry Moran, an ABC correspondent in Moscow, said of Putin Sunday. “He’ll use the referendums as he sees fit.”

These votes give the Russian leader no grounds to swerve from his current position: The Americans, the Europeans, the Russians, and the Kiev government should assemble to negotiate a settlement in Ukraine that brings the country’s fractured sides back into the political process and enjoys multi-sided international support. In my view, the prospects for this could now improve.

The next consideration for all sides is the schedule for presidential elections, now set for May 25. The Obama administration, the Europeans, and the Kiev provisionals insist these polls must go forward as planned.

On this question, Putin has just given us one of his trademark surprises. Two weeks ago a senior official termed the thought of keeping to schedule “absurd.” The president now allows that elections will be “constructive,” providing that voters in eastern and southern Ukraine get a clear idea of their guaranteed rights under a new government.

Maybe this is a crafty hedge. Regardless, the referendums have just shown us how unworkable polls are in a nation where large regions are beset by a military conflict and where rebels hold major cities.

Elections are vital to Ukraine’s future, but they’re not the next step. Creating the conditions necessary to make a national election possible is the next step.

Related: Putin’s Obsession to Reunite the USSR Can Destroy Russia

It is doubtful a majority of voters in the east and south would plump for annexation, which is confirmed by polls, and Moscow has been clear this is not its ambition. But it is beyond doubt now that a solution that holds Ukraine together will require either a high and substantial degree of autonomy for the regions or a federalist structure.

The drift in Washington and the news reports is that this has been Putin’s sinister design from the first: to leave Ukraine sufficiently decentralized as to make it geopolitically inconsequential and remove any threat that would arise from a Western-tilted government on its border.

There is a leap in logic here that should be resisted. Certainly a nation with a decentralized power structure would be to Moscow’s liking. This does not mean Moscow has plotted for such an outcome. Given what we have learned of Ukrainians, not least this past weekend, it is hard to assail the logic of either autonomy or federalism.

Circumstances are doing the dictating in Ukraine now, not any strongman to its north.