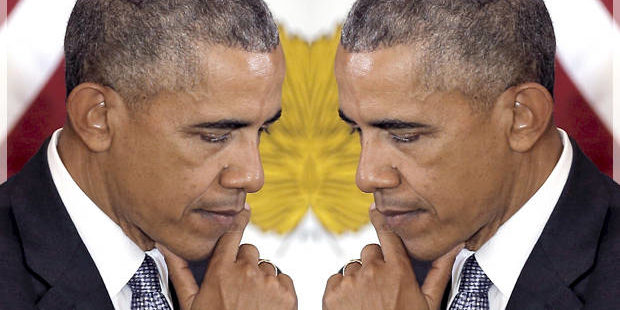 The two Obamas: An assessment of our capable, but captive president

Not long ago I had the president of our great country down as a conundrum or an enigma or a Hamlet or a hypocrite—or any combination of these or all four. One way or another, a hard read. Dearly did I wish his name offered some useful music such as to suggest a phrase comparable to the immortal “Tricky Dick.” Nothing doing. Neither “Barack” nor “Hussein” nor “Obama” brings forth any serviceable poetry.

But who and what this president is comes clearer, it seems to me, in the waning days of his presidency. I first twigged to this on the occasion of Obama’s extraordinary appearance at the African Methodist Episcopal Church in Charleston after the June 17 murders last year. Finally, our first black president could speak eloquently and forcefully as a black man and stand ready to take on all comers.

That was the president those who voted for him intended to elect eight years ago. Remember his acceptance speech? I do, vividly, although I was living in Hong Kong at the time. When Obama referenced the great Sam Cooke with the phrase, “It’s been a long time coming,” I heard a man who understood text and subtext and knew how to make use of both.

Then came the badly mixed record, especially in foreign policy. And then came the questions. Who is this guy? He cuts a deal with Iran and then sets about defrauding them. He opens to Cuba with the idea America will have its way there yet. Some monstrous political sharp? Some neoliberal Trojan horse? The cleverest-yet front for the Pentagon and the spooks with his bombing campaigns and weapons programs, his crummy reforms after the Snowden revelations, the assassination list he peruses weekly in the Oval Office?

It will take our better historians to sort the man out, but I now propose a credible version of what they are likely to find. He is the smartest man to occupy the White House in who knows how long; Bill Clinton is a wet ball of papier mâché by comparison. He is a person of principle, even if one of these is an exceptionalist’s faith in neoliberal economics—for which, curses. And at bottom he is a captive—a prisoner of our invisible government. In this he proves a revelatory test of just how extensive has been our Deep State’s long, silent coup and how powerful its operatives have become over the past seven decades.

This president gets done what he can, usually on the domestic side — a lesser interest among the military-defense contractor-intelligence cliques. But in matters of overseas policy he is high school, as we used to say. He caves and justifies at every turn, or most, because the only alternative (as I am told he himself reckons) is to risk the fate of the Dulles-defying JFK.

If this take is anything near correct, it leaves us with something very large to think about. A lot of us acknowledge we no longer live in a democracy. In Obama we glimpse just how frightening is the America we have let the powerful and the paranoid make. It is as if Orwell and Terry Southern co-wrote a script for Stanley Kubrick, except it is far too late for satire.

I urge readers to reflect upon two recent events with this admittedly speculative analytic construct in mind. They occurred back to back, like a pair, as these things have often seemed to be during Obama’s White House years. Each is worth considering in its own right, but together they return more than the sum of parts.

Late last month, alert readers will recall, Obama designated the Stonewall Inn in Greenwich Village, site of the storied confrontation between gay New Yorkers and the police in 1969, a national monument. The event got some coverage; Obama’s remarks got next to none. Nobody considered his speech for its larger implications — but then, very few journalists are capable of properly analyzing anything that truly matters.

“The story of America… is written by ordinary people who put their shoulders to the wheel of history,” Obama began. Then a list: “Farmers and blacksmiths… immigrants… women… scientists… the preachers, and porters, and seamstresses…”

Then on to Stonewall: “… They stood up, and spoke out, and over the course of the next several days, they refused to be silenced. The riots became protests; the protests became a movement; the movement ultimately became an integral part of America.” And finally: “The arc of our history is clear — it’s an arc of progress.”

Do not miss what Obama is doing here — doing with full knowledge of what he is doing, I would say. To invoke history in this fashion is history in its own right. History is a powerful weapon, as often argued in this space. It is a superbly effective instrument when directed against power — which is why, to state the obvious, power is allergic to it.

The true, buried history of this country — Howard Zinn’s history, the history of Steve Brier’s “Who Built America”— has been a war zone since the Progressives engaged the fight in the 1890s. To take possession of this history is the essential first step in any endeavor to build a future that departs from the present. Obama understands this, surely. That is why he, a sitting president, insisted on bringing history into what he did in downtown New York on June 24.

But it is a downhill slog through the sludge of history corrupted to last Friday, when the administration purported to come clean on the human cost of Obama’s unforgivable use of unmanned drones in what amounts to an official assassination campaign worthy of the C.I.A. at its Cold War worst.

Twenty-four hundred members of terrorist groups and 64 to 116 civilians in the seven years to the end of 2015: This is the official casualty count, and it is sheer contrivance. Even the government-supervised New York Times had to acknowledge—in its second paragraph, no less—that it amounts to a small fraction of any, as in any, estimate by any, as in any, independent monitoring group. For good measure, the casualty numbers were provided without dates, specific locations or geographies, making it impossible to investigate or challenge them.

The report cited was issued by the Director of National Intelligence. It purports to establish the principle of transparency ever and ardently touted during the Obama presidency. Are these two facts some kind of Joke—the kind Kundera famously capitalized to describe the cosmic confusion of truth and lies in Eastern Europe? D.N.I. reports on the D.N.I.’s doings and the president nods his acceptance: Am I the only one who is reminded of the old Soviet ways with these things?

Note well: Obama simultaneously issued an executive order designating civilian protections as a priority — they were not such previously? — and making disclosure of the casualty count an annual event. It also insists, in the language of a McKinsey case study, on “best practices” as Americans murder others with or without cause. To its credit, even the Times had to observe that this is nothing more than a backdoor way of institutionalizing Obama’s drone program as he takes his final walks in the Rose Garden.

The take-home our president just handed us: Drone assassinations—  of “suspects,” outside war zones and in contravention of international law—are part of the way we Americans do things now. Get used to it (and used to paying for it). A pro forma report on the consequences, issued by those executing the program and having little to do with reality, is all you will get as a salve to conscience. Get used to this, too.

History elevated, history obliterated even as we live it — all in the course of two weeks late in the presidency of Barack Hussein Obama. One must hold the former dear and condemn the latter, even as they issue from the same man.

I offer my explanation of the man and his record. If there is a risk in it, this lies in the direction of undue generosity.