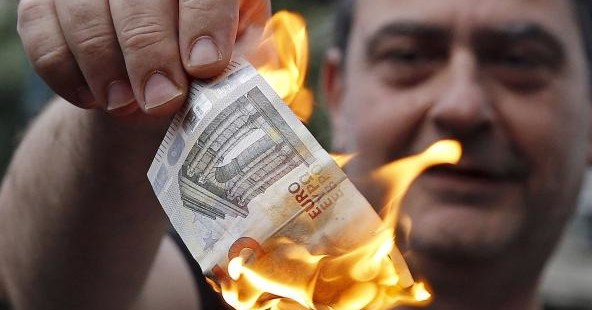 To the Brink: Why It’s Time for Greece to Call the Euro Quits

The wind whistling past Alexis Tsipras’s ears must be a deafening howl. The crisis facing the Greek prime minister now mutates by the hour—deteriorating markedly over the past several days.

As of Sunday evening Greek time: After emergency meetings with monetary authorities, a Bank of Piraeus executive announced that Greek banks and the Athens stock market would remain closed Monday. The banks and markets are anticipating a run on deposits and a massive share selloff—both having gathered momentum since the outlook for a deal with the European Union and the International Monetary Fund dimmed last week.

The scales have tipped, and a Greek default and a follow-on exit from the eurozone are again the ascendant prospect. Bitter as it is to say, Greece is better off in the end; so will be the much-tarnished European project.

Ambrose Evans-Pritchard, the finance columnist at The Telegraph, calls the Greek crisis“the Iraq war of finance” and accuses the E.U. and the I.M.F. of “deliberately provoking a bank run and endangering Europe’s system in their zeal to force Greece to its knees,” the intent being “to duck their own responsibilities leading to this impasse.”

As of last week, it has never been plainer that the Greek crisis is all of Europe’s, as this column has maintained for months. Now it is very baldly political, too—far beyond the number-crunching technocrats in Brussels and at the European Central Bank in Frankfurt (where it never should have been domiciled, given its proximity to the German Bundesbank).

Events since the middle of last week are a scramble—about as easy to dissect as a plate ofmoussaka. Chronology is all, so let’s lay it out as it went:

• By midweek, the E.U. and Athens had revised their bailout proposals in the course of back-to-back emergency meetings of European ministers with Tsipras and Yanis Varoufakis, his finance minister. The Greek side had made more politically perilous compromises, notably on budget surplus targets and in its proposed tax reforms, and notably not on already slashed public-sector pensions.

The E.U. advanced modified terms that amounted to tinkering at the margin. Example: The “institutions,” as Greece’s lenders are called, allowed that hotels could be exempted from a higher consumption tax for the sake of tourism receipts. In their grim context, Greeks have a hard time counting this as a consequential concession.

On the table at this point was a five-month extension of the bailout. Sign the deal and roughly $8 billion of the rescue funds agreed in 2012 will flow. Don’t, and Athens wouldn’t be able to cover a $1.8 billion payment due at the I.M.F. this Tuesday.

• Last Friday Tsipras announced that he would call for a public referendum on July 5th to determine the majority sentiment among Greek voters. Should he and Varoufakis sign the E.U.’s late-hour offer or not? The referendum question would probably be more or less this simple.

• On Saturday the E.U. reacted: It abruptly withdrew the bailout extension, leaving nothing left for Greeks to vote upon. It also refused Greece’s request for an extension of talks to accommodate the July 5 vote. At this point spin became the game, Jeroen Dijsselbloem, the Dutch finance minister and leader of the Eurogroup finance ministers, being the point man.

Dijsselbloem immediately accused Tsipras of breaking off the talks. The referendum idea, he said, “has closed the door on further talks while the door was still open, in my mind.” When Varoufakis was excluded from a ministerial meeting Saturday afternoon, Dijsselbloem wouldn’t use his name. “Our Greek colleague will not attend,” he said.

• Early Sunday morning the Greek parliament voted to back the referendum proposal. No surprise here: The left flank of the governing Syriza party, unhappy with Tsipras’s horse-trading in Brussels, had hinted for several days it wanted one.

• On Sunday morning, the E.C.B. announced that it wouldn’t provide further increases in emergency funds to keep Greek banks liquid. Last week the E.C.B. raised its limit on liquidity funding to $9.8 billion. In effect, the Bank of Greece is now on notice that when the current provision runs out it’ll be on its own covering an already evident run on Greek institutions.

• Later Sunday, the Bank of Piraeus executive disclosed that banks and the stock exchange would remain closed Monday.

• Also late Sunday, the E.C. B. board voted—unexpectedly, like everything else lately—to provide Greece roughly $2 billion in liquidity on Monday, the same amount it advanced Friday, indicating internal turmoil.

“It is obvious that [E.C.B. President Mario] Draghi doesn’t want to be tagged as the one responsible for pushing Greece out of the eurozone,” a European source wrote Sunday evening. “I suspect he’ll do the same Tuesday, so Greek banks can keep their heads just above water. By Tuesday there will have been another E.U.summit.”

You got a problem with any of this? I got several.

Did Tsipras abandon the bailout talks? Did Varoufakis decline to meet with E.U. counterparts Saturday? Is the referendum a political move intended to force the E.U. into a corner, as E.U. officials charge?

One, calling the referendum was in no way tantamount to a walkout. The inverse reading is truer, in my view: It was implicit in his move that Tsipras took the deal seriously. If I’m going to sign this, he as much as said, I have to make sure the people who put me in office are on for it. This hardly equates with rejection.

Two, Varoufakis was still working the telephones, tweeting, and trying to keep contacts open late into the weekend. Dijsselbloem’s account of the Greek minister’s stance was disingenuous to put the point too mildly.

Three, the referendum is absolutely a political move. Narrowly, Tsipras has been skating on thin ice among key Syriza power blocs. Broadly, the anti-austerity majority in Greece have a prima facie right to judge a deal wherein Tsipras and Varoufakis have gone considerably further—on privatizations, for instance—than they promised when elected in January.

With his call for public consultation, Tsipras instantly crystallized the political tint the crisis has assumed. And that’s the E.U.’s core problem now.

The E.U.’s swift recoil—transparently combative, in my view—reflected its fear of an indefensible outcome: Should Greek voters reject the latest bailout terms, the European position would be all too openly exposed. Europe has effectively argued all along that the democratic process—to say nothing of the basic well-being of Greeks—counts less than technocratic calculations and targets (which, in any case, have repeatedly proven wrong in Greece and elsewhere).

“Democracy deserves a boost in euro-related matters,” Varoufakis tweeted Friday in support of the referendum. “We have just delivered it. Let the people decide. (Funny how radical this concept sounds.)” I find it hard to counter this observation.

Just seven days ago, it seemed likely that a deal would be struck between Greece and its creditors. Today, as things stand, a Grexit starts to look inevitable.

Here we go into capital controls and the monumental complexities attaching to remonetizing the drachma. Contacts, if not talks, continue. Something may emerge between now and Tuesday. But this is now the likely outcome.

If this is Armageddon in the war between unelected technocrats and the democratic process, as it so suddenly seems, the choice is hard and easy all at once: Grexit will be tough going for Greeks, no question, but to put democratic values above market values is a simple decision: There is no other choice.

When the European project began in the immediate postwar years, Churchill, Robert Schuman, Jean Monnet and others explicitly advanced it as the instrument by which Europe must fortify its democracies. If Europe’s progress now depends on turning this intent on its head, well, the Greeks will do every European a favor and an honor if they say, “Turn back! Or not at all!”