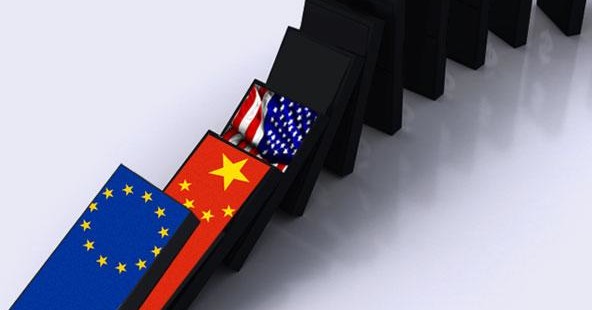 Three Global Hotspots that Can Damage the Recovery

Wories to the west of us, worries to the east. It is hardly the kind of August to encourage us to head for the beach and try to get through Proust for the 16th time. There are signs we are headed into a turbulent autumn. Big decisions are coming, choices that will affect the global economy in the coming months.

CHINA
How far down the growth chute will China have to go? We have just seen a set of data far worse than anyone anticipated. China’s exports grew at 1 percent in July from the year earlier, down from more than 10 percent and the lowest rate in three years. Bank loans are off, and so is factory output. The reason is key: weak demand in Europe (exports down 16 percent) and the U.S. This is the face of globalization in the context of recession as opposed to growth. The truth is we are not equipped to manage the downside of globalization.

China cannot be expected to act as the world’s growth engine—nor does it want to. It is inward-looking at this stage in its development, and the key to its economic course is stimulus on its own behalf. Beijing has already provided some, but it has plainly proven insufficient.

The questions are these: How much stimulus does China need, what form will it take, and when should it be applied? Last week the industrial city of Changsha, in central China, announced plans to provide $130 billion in fiscal stimulus. That is the idea. As to the last question, Changsha has it right again: The answer is now.

While China is focused on internal issues, the country is still investing in growth. How are Americans going to react as the Chinese invest increasing amounts in fixed assets (plant and equipment) in this country? Chinese corporations are expected to put as much as $8 billion into U.S. companies this year (not counting share market trading). That is up nearly 50 percent over 2011.

Two deals raise the issue. Last week a clean-energy battery maker near Boston namedA123 Systems announced that a Chinese conglomerate, the Wanxiang Group, would invest up to $450 million in the company. Wanxiang would potentially take control, holding up to 80 percent of the stock.

The other transaction is a little weird. CNOOC, the Chinese state oil company, has a pending bid of $15.1 billion for an oil company called Nexen. This would be the biggest overseas investment China has ever made and would make CNOOC a presence in the North American oil business. But Nexen is Canadian, and only 10 percent of its assets are in the U.S.

The predictable questions are nonetheless raised. The CNOOC bid is headed for a review by a Senate committee that has the power to block it on national security grounds (as it did when CNOOC bid for Unocal seven years ago). The A123 deal is prompting questions as to whether a Chinese company should control a Boston battery maker and whether the U.S. is falling behind in clean-energy technologies (at which China now excels).

The worry here is a continuing paranoia among U.S. government officials who insist that China’s intent is to take over the world. “This deal prompts great concern about the Chinese government’s continued attempts to use its state-owned enterprises to acquire global energy sources,” a spokesman for Nancy Pelosi, the Democratic California congresswomen, said of the CNOOC bid the other day. It is typical, it is xenophobic, and it is ridiculous. What prompts concern are America’s outmoded attitudes. These acquisitions need to go through—and soon. If they do not, it will lend a jagged edge to a bilateral relationship that is already uneasy.

EUROPE
Europe’s crisis is beginning to bite into the U.S. economy. Measures cannot be precise, but we think the European Union’s members account for about 15 percent of revenues for major U.S. companies. And corporate earnings in the U.S. look like they have begun a steep slide as a consequence. Analysts’ estimates of revenue growth among Standard & Poor’s 500 companies averaged 4.7 percent as recently as April. The consensus is now at 0.9 percent.

The big worry is what Germany will do as summer slides into autumn. Europe awaits new mechanisms to bring it beyond its crisis—mechanisms the EU negotiated earlier this year—but Germany has yet to decide whether it is on or off the bus. It is essential—for Europe and the rest of us—that Chancellor Angela Merkel climb aboard. But with a national election next year, whether she will or not is difficult to call.

Merkel’s political opponents, the Social Democrats, have just backed the idea of a fiscal union in Europe that would allow the European Central Bank to issue bonds backed by all EU members—eurozone bonds, as they are called. The SPD’s proposal would require amendments to the German constitution. In addition, Germany’s constitutional court is to rule in September on whether the European Stability Mechanism, a $614 billion rescue fund that formally opened its window on July 1, fits with the national constitution.

The stakes are big, as in “Will the euro zone survive?” The EU is midway in one of the largest transformations in its history. It involves the transfer of a considerable amount of sovereignty to Brussels and Frankfurt, where the ECB is located. So it also requires new thinking on the part of European leaders and voters. We are all Berliners in this case.

IRAN
Every time Washington announces yet more sanctions against Iran, as it just did, it is a step toward a frightening, globally disruptive outcome of the crisis over Iran’s nuclear program. The thought that Israel may be planning a unilateral attack against Iran as early as this fall is not one’s idea of a comforting security policy.

It is increasingly clear, at least to me, that the tail is now wagging the dog. Each time Benjamin Netanyahu or Ehud Barak, Israel’s prime minister and defense minister respectively, make noise about their impatience with the diplomatic process, the Obama administration pushes its extravagantly extensive sanctions program further. I suspect a degree of behind-the-scenes choreography between Washington and Jerusalem: “You float this scary idea and then we’ll calm you down with this new policy.”

Sanctions are hurting in Iran, let there be no question. But they are hurting children and ordinary Iranians most. More saliently, they have had no effect whatever on Tehran’s nuclear projects. Iran’s motives in part reflect its desire for deterrence—a policy we used to hold high. A productive outcome in this case would arise from the negotiating table, and Israel’s bomb would be as much at issue as Tehran’s potential to develop one.

← Can Draghi Turn the EU Ship Around in Time?
Election 2012: Do Candidates Have a Foreign Policy? →