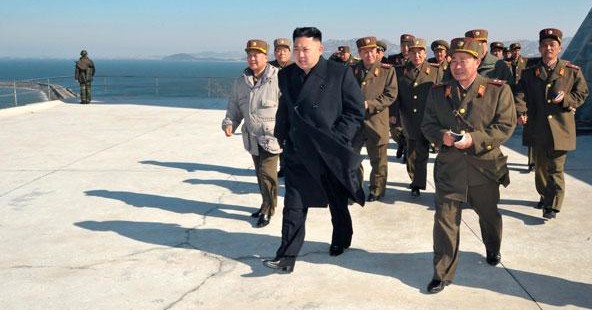 The Cold War Heats Up Between the U.S. and N. Korea

When Defense Secretary Chuck Hagel announced last Friday he would deploy14 new missile interceptors on the West Coast to thwart a potential nuclear attack from North Korea, the U.S. was squarely placed back in the Cold War.

Hagel was responding to North Korea’s decision to void the armistice that ended the Korean War and their threat to launch a nuclear attack.  The New York Times David Sanger said on CBS’s “Face the Nation” that the threats are not new, but their nuclear capability is. “”They’ve now conducted a third nuclear test, and by all the early indications, this time it really worked,” Sanger said.”They have sent a missile as far as the Philippines. If you do the math on that, they’re about halfway to being able to hit the Continental United States.”

North Korea will almost certainly take pride in Washington’s latest defensive move. But by no measure is it a token of American leadership on a question that now requires something more than hardware. You do have to wonder whether Washington doesn’t secretly like having North Korea around as part of the old “axis of evil.” We are now deploying an additional $1 billion worth of missiles, after all.

While the North’s nuclear program is widely understood to be weak to the point of primitive, nobody has been pleased with Pyongyang’s behavior under the inexperienced Kim Jong-un—not even Beijing. Things escalated when the UN Security Council (with China’s assent) announced rigorous new sanctions against North Korea. Then came the start of joint military exercises involving American and South Korean troops, which are still in progress.

These moves prompted a series of threats from the North.  Pyongyang cuts the telephone hotline at the demilitarized zone. Kim Jong–un, the North’s 23-year old new leader, declares that he is abrogating the 1953 armistice halting hostilities between the US and the North. Then Hagel decides to move his missiles. On Sunday, Kim declared that the North’s nuclear program is no longer negotiable in exchange for trade and economic concessions.

There are other ramifications: The six-party talks that started in 2003 are now dead. South Korea, Japan, China, Russia, and the US had intended to ease tensions and negotiate the North away from its nuclear program. These talks made good progress, but they failed in 2009 because North Korea barred nuclear inspectors and had launched another nuclear test in May of that year. Hopes for reviving the talks have since been expressed, but now there is none.

Second, we have a case of political weightlessness. Kim Jong–un comes across as someone better suited to trading sports cards with friends like Dennis Rodman. He is too young, and this is a liability. Much of what is occurring now reflects his efforts to shape a forceful image behind which the regime can consolidate. President Park, in the South, is vastly more sophisticated. But not hugely more experienced in diplomatic and security affairs. Pyongyang has already betrayed her campaign promise of an “era of trust” on the peninsula.

How seriously should we take the North Korean threats?  What has been going back and forth between the Koreas and across the Pacific for the past several months is garden-variety muscle flexing. It has been going on for decades. Washington at first played down the noises from the North. The UN sanctions were negotiated with dignity. But the game changed with the acceleration and proven capability of the North’s nuclear prowess.

Richard Haass, President of the Council on Foreign Relations, thinks China could be the key to turning off Kim’s war machine. “This is a dangerous ally for China to have, and the more the Chinese can pressure them and put the economic screws on them, the better it will be for everybody,” Haass said on “Face the Nation.”

China has begun to show ambivalence regarding support for North Korea. Officially, nothing has changed. But when Beijing voted for harsh sanctions, it was certainly intended as a slap on the wrist to its ally (and client) in North Korea.

Since then, Deng Yuwen, deputy editor of a Communist Party journal in Beijing, published an explosive piece in the Financial Times. China should abandon North Korea, Deng argued: Its ideology is an artifact, its value as an ally is outdated, and it will not reform (as China had hoped.) “Why should China maintain relations with a regime and a country that will face failure sooner of later?” Deng asked.

Beijing is probably now in deep discussions with Pyongyang. China’s policy shift will be gradual, by all indications, but it means that the next useful opportunity to engage the North is going to be diplomatic, not military. And if Seoul, Beijing, Washington, and others have the foresight, future discussions will not concern any grab bag of trade and energy concessions but—the only worthy topic left—reunification.

China will have the lead in any such demarche, but that has been so since the days of the Six-Party Talks. Washington can play a crucial supporting role. Reunification, do not forget, will be a hard sell in the North. With it, the three-generation Kim dynasty will end unless there is some way to accommodate a form of autonomy.

Watching the events concerning Korea over the past several months has been like watching people bounce off the walls of a fun house. They have made little sense. Oddly, however, we are not now in so bad a position—providing the people in the fun house can identify our opportunities.

← Is “Abenomics” Japan’s Second Economic Miracle?
The Eurozone Deal Cyprus Could Not Refuse →