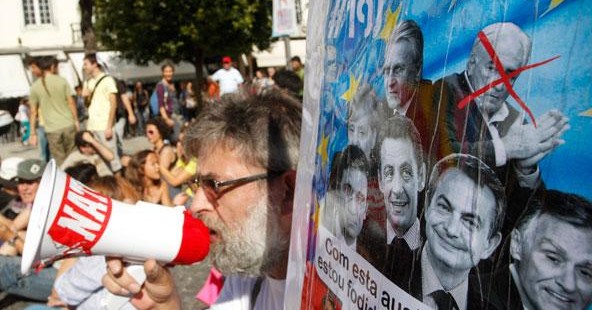 Spain, on the Brink, Could Derail the U.S. Economy

Greece’s austerity plan, complete with debt swap, is now in place. Spain has announced its most rigorous budget since the post–Franco restoration of democracy in the 1970s. Italy has passed economic reforms worth more than $130 billion, 7 percent of GDP, and is generally considered on target to balance its budget by 2013.

So we are on the way back to economic health among the peripheral members of the euro zone. Isn’t this what the markets, together with conservative political leaders, have said all along that the eurozone needs?

It is less and less likely to work out this way as each day passes.
What we are witnessing this spring in Europe is a showdown among the surgeons in the operating room. The chiefs of surgery are certain that vigorously applied austerity is the fastest route to a cure. On the other side of the operating table are those—admittedly few—who are arguing that austerity alone will achieve the opposite of the desired outcome: It will kill the patient.

What’s at stake is the health of the global economy — the United States is especially vulnerable as it slowly climbs out of recession. Even the presidential election hinges to some extent on the successful recovery of the eurozone.

In an ominous sign, the Greeks, with all the ducks lined up, are not finished arguing. Prime Minister Lucas Papademos, who saw Athens through weeks of tough negotiations with the E.U. late last year, now faces a parliament pushing scores of amendments — all of them intended to spare Greece one cut or another.

While proponents of austerity have held sway more or less without interruption during the whole of the European crisis, this spring could change that, primarily because of a plethora of grim economic data. Spain, for instance, is committed to reducing its public-sector debt from 8.5 percent to 5.3 percent in one year to meet targets imposed by the European Union. And there’s another cut of 3 percentage points scheduled for next year.

Meantime, the economy this year is now forecast to shrink by 1.5 percent to 3 percent. It’s no surprise the nation is beset with strikes by virtually all of its major labor confederations.

Spain’s problems are twofold. First, its 17 autonomous regions —which have been politically powerful as a matter of history—will not necessarily help Madrid meet its targets. They were not so inclined last year. Second—and this is a king-size irony—the bond markets keep pushing up the cost of Spain’s sovereign borrowing because they, too, question whether Mariano Rajoy, the center-right prime minister, can deliver on his recovery plan.

It is the bond markets, of course, that are a major voice among those calling for severe austerity as the medication of choice for peripheral Europe. At present, it costs Madrid 3.6 percentage points more to issue a bond than it costs Berlin. That is expensive money.

Last week Eurostat, the E.U.’s number-crunching agency, announced a Europe-wideunemployment rate of 10.8 percent, representing the 10th consecutive monthly rise. Spain’s unemployment rate: 23.3 percent of the work force. How can a country that does not go to work produce, consume, and export meet its economic goals?

There are a few ways to look at the European situation emerging this spring. One is historical. In my view, a crisis that has been badly mishandled since it began in late–2008 is now on the brink of destroying Europe’s long-entrenched social democratic tradition. You can mourn or you can applaud, but either way you may be living through an important moment in European history.

Second, anyone who thinks Americans can sit back and watch with detachment as Europe falls deeper into crisis is living in a dreamland. An ocean does not protect the U.S. from the same kind of contagion Europeans worry about among themselves. In addition, we ought to pay more attention to the Europeans’ austerity-alone strategy, given that it is more or less our own, too. Last week’s weak employment numbers ought to remind us to look carefully across the ocean.

Finally, what is it the Europeans should do that they are not doing now? Various ideas are (finally) emerging. One comes from Danish Prime Minister Helle Thorning Schmidt. It is for targeted stimulus. Another is to follow short-term bailouts with long-term support for growth-generating investment. There is even talk of another Marshall Plan for Europe: This would entail project financing by the European Investment Bank and more government-backed investment.

It is these kinds of ideas that could salvage Europe from the mess it is in now. It is clear that more and more European officials are questioning the reigning strategy for dealing with Europe’s ills. Where have these voices been all this time, and why aren’t they louder and more numerous?

← Why Obama’s Iran Strategy is All Wrong
How a European Recession Can Infect U.S. Markets →