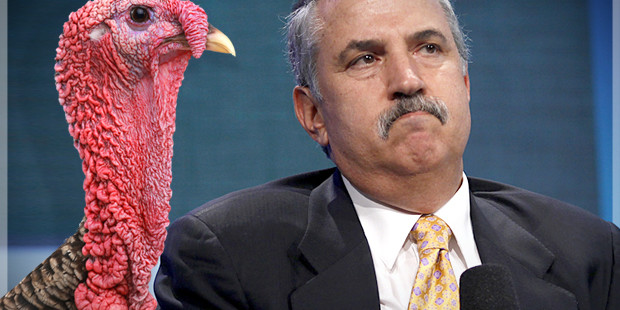 “Our media have betrayed us incessantly this year”

This is a day to give thanks and to remember. That’s harder and harder with a media that wants us to forget

It grows more difficult, all thinking people must admit, to figure out what we Americans are to be thankful for this time of year. There are many things to celebrate and these we must see and never lose sight of, but you have to work at it — harder every fourth Thursday in November, it seems. The good of our great country is not readily apparent amid the mess we insist on making of ourselves at home and of as many others abroad as we can get our hands on.

This is the inscription on my Hallmark card. Happy Thanksgiving, dear readers.

Bitterness, you say, bitterness on Turkey Day, and you are partly right.

If you are not bitter at the sight of our place in these times, especially when you put it next to what our place could be, you suffer what I call the tyranny of American happiness, a burden that besets many of us. Bitterness, like nihilism, is not to be avoided by walking around it. You have to pass through it to put it behind you. Then you have truly exited the economy of regret and betrayal and arrived in an economy of possibility. Things can get done in this latter place. Getting there, it seems to me, is a necessity of living well in the America we find ourselves in.

In the service of this project it is good to think of the people who invented Thanksgiving, a universe away as they may be. They are, in the Swiss cheese of American memory, what we once were. And some earlier version of what we could be: It is up to us, always.

They were refugees, more or less, washed up on the rocks of the New England coast. They had very little, no clear idea of the prospects and not enough to eat. What was on the tables of the early settlers — corn, pumpkin, squash, cranberries, blueberries, turkey, shellfish, tomatoes, turnips, sassafras and so on, a long list — Native Americans either put there or taught the palefaces how to do so themselves.

The very little was a source of genuine gratitude, then. The feast after harvest was well-earned. All partook, the cornucopia flowing evenly. At the first Thanksgiving, in 1621, the European arrivals and Wampanoag Indians celebrated that first good harvest together.

Another feature of the early Americans was explored some years ago by a scholar named Andrew Burstein, in his book, “Sentimental Democracy.” Burstein’s theme was elusive, and it is a tribute that he nailed it. We Americans used to be an affectionate people, as this term was then used. Kind and generous we were to one another, and these attributes — American sentiment altogether — were what Americans wanted to project to others: They were what set us apart.

How far we have come — or gone, better put.

Most Americans like to think the world as we have it is the world as Americans have made it since 1945. This is a satisfying thought except when things go wrong, which is most of the time, and then the line is, What? Stop talking as if Americans are the world’s all-powerful managers. We cannot do much. The latter is a common theme in the comment thread attaching to these columns. It is insufferably coy.

My view of the world as we have it, and whose doing it is, will be plain to anyone who visits this space even occasionally. No need to rehearse. Just this, for its poignancy:

In June the UN’s refugee agency reported that the number of refugees worldwide now exceeds 50 million for the first time since the German and Japanese defeats in 1945. Let there be no argument as to the many millions of these that are the fault of our foreign policy cliques and the Pentagon. Let no one call right-wing resistance to a properly humane immigration policy anything other than obscene. Those in question are among the countless victims of the Monroe Doctrine, plain and simple.

To consider our lack of sympathy for these populations — a worldwide increase of 6 million refugees last year alone, 1.2 million more Iraqis this year alone — is to measure our distance from those asylum-seekers we call the Pilgrims. This is my larger point here.

The tragedies on the ground are there to see for the few who bother to look. Running deeper than these is the turn of American affections and generosity into contempt, Old Testament revenge, xenophobia, a truly pathological attachment to violence.

Burstein gives us a useful piece of history in this regard. He marks the change in American affect to Andrew Jackson’s rise to national prominence in the 1810s and 1820s. Jackson’s celebrated campaigns against Native Americans — he could count 125,000 notches on his holster by the time he was done — changed the common notion of what being an American meant. One had to be hard, masculine, suspicious by default, quick of judgment and with not too much on the intellectual side before taking action. The virtues of the eighteenth century came to be considered more than slightly effeminate.

This is a tragedy, too, it seems to me, not least because we live with it. American empire is a psychological phenomenon as much or more than it is anything else, and this is its pathology. Man up, as Secretary of State Kerry memorably advised Edward Snowden earlier this year — and for goodness sake do not think too much.

The early Americans (those of European descent, I mean) had a quality we have lost, and one puzzles over when and why. They had the gift of some kind of native confidence, even in the face of grave odds. To be generous toward others, to offer peaceable sentiments, are acts rooted in self-assurance.

Not much Americans do now, at home or among others, reflects anything other than anxiety about our position, the defensive crouch of the cornered. It does not take confidence to bomb somebody or other more or less incessantly, or to urinate on prisoners of war, or to mount coups in contravention of international law. It takes fear, uncertainty, an insatiable need for security — at the horizon a silent suspicion, maybe, that we may have gone wrong and do not know how to turn back.

For most of my life I have been among the fortunate minority (when counting everyone) able to sit before a turkey or goose on November’s fourth Thursday. I honestly cannot recall the last time I did so without a highly qualified gratitude. This, too, grows worse by the year.

Looking around the world, it is decades past possible to pretend our plentitude is so well and honestly earned as it was in 1621. By the latest figures, 22 percent of American children live in poverty. Please pass the stuffing has to be an attenuated request for any right-thinking American.

True enough, we know more about the world than ever before and know it instantly, “real time.” But it is more than this: We are a different people relative to what we once were and could have been. I detest nostalgia, I had better add — it is a form of depression. This is written from a consciousness of possibility, not loss.

My read as to 2014 and its primary drift: America has grown measurably more desperate to avoid the realities of our new century, and we all know simply from living that decisions made in desperation — love, work, art, all of it — turn out well only by sheer accident. They usually cause messes, and if I have written this column with modest proficiency this year one can count them in the weekly contributions.

Here comes the big “but.”

We can see better: There, in a phrase, is where I begin my list of things to be grateful for. Think of it as a great dis-illusioning, and I love to bits watching people be dis-illusioned, helping any way I can along the way.

Our policy cliques have had an especially destructive year abroad, and I see no near-term prospect of anything different. But we witness a widespread loss of faith in these people — and official accounts of anything, for that matter. Good. Fewer illusions.

We witness a corresponding rise in voiced objections. And if Vietnam taught us anything, it is that Washington cannot conduct a destructive foreign policy without a domestic consensus, even if this consensus consists mostly in acquiescence. The medium and long term, hence, look better than the short.

Our media have betrayed us incessantly this year, and I see no coincidence in this. They are less and less able to publish and broadcast events as they are because of who owns them and their corrupted relations with power. Simply to express the truth in any given case starts to become a transgression. And to express it in plain language becomes positively un-American.

But we see a similar loss of faith in our media. Again, all good.

Our public space is under severe attack from corporations, a hopelessly corrupt  legislature, a compromised judicial system, the surveillance state: All true. But we find we have enough shared space left to make good use of. In it, we can think anew together. I can write this admittedly bile-spilling column, and this only seems to bring it down to the personal. Free expression is not a privilege but a right. Ours is severely attenuated, but enough of this right yet survives, and not all the world’s people can say this.

Idealist as these thoughts may seem, if did not think they were valid, I ought to add here, I would not bother writing the column. There is your proof of my conviction.

Again I come to the paradox of optimism buried in pessimism. I am thankful to witness an old order in a state of advancing decay — and I think it is. There will be others to share this view. One’s responsibility, having come to this conclusion, is to express this gratitude by beginning in some small way to make something, lots of things, new.

New and not new, to bring this holiday card to a close. The eighteenth-century ideals of the generation that wrote the Declaration are the single greatest thing Americans have ever given the world, in my view — greater even than the iPhone. Americans very quickly set about not living up to them, but they are still there, and for this one absolutely must be thankful.

Ideals, by definition, are never achieved. They are always out in front of us, the far star, the point of all striving. We should be grateful for having hard work in front of us, then. The trick is to see that the hard work is there. If nothing else, setting about it keeps us out of that economy of bitterness, anger and betrayal.

Good weekends to all.

← Why Google and Uber Are Playing Badly in Europe
As Deflation Looms, It’s Europe’s Moment of Truth →