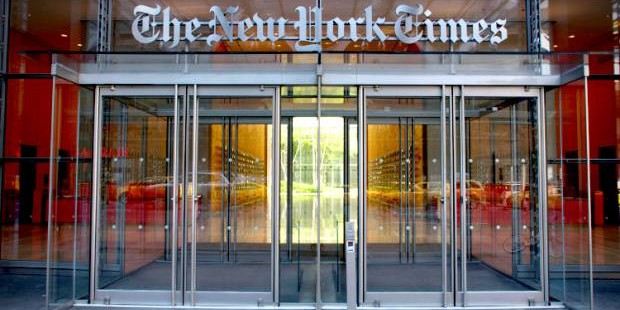 Our embarrassing, servile media: Does the New York Times just print everything the government tells it?

The paper of record is carrying Washington’s water in its Ukraine reporting — all too believing, once again

As the crisis in Ukraine lurches on, and as a media war is ever more prominent a feature of it, I think it is time to tell a story. Some readers will know it; those who do not should. Our media war is waged for hearts and minds, as they often are, but not those of Ukrainians. Nobody cares what they think or what befalls them. Your eyes, ears and brains, readers, are the battlefields.

This is the story of Sydney Gruson, a long-serving and celebrated New York Times correspondent. I consider it essential to be aware of the history embedded in the tale so you know what you are being served when you read the Times’ coverage of Ukraine and Russia and, not least, the institutional habits of those doing the serving.

Gruson joined the Times in London during World War II and went on to numerous postwar assignments in Europe and elsewhere. Here we zero in on his coverage of Guatemala in the early 1950s, as the Dulles brothers—John Foster at State, Allen at the CIA—prepared for and then executed the coup that brought down Jacobo Arbenz, the elected president, in June 1954.

Gruson was hardly shy of reporting the influence of Communist labor leaders and legislators in Guatemala City. At one point Foreign Minister Guillermo Toriello accused him of red-baiting and expelled him for a few months. But Gruson’s real problems arose from his efforts—by the CIA’s own declassified accounts—to report disinterestedly. The even hand did not do back then (as now, alas).

In December 1953 Gruson wrote of Washington’s double standard in Latin America—dictatorships were OK, leftists were not—and noted “a fixed concern over the United States’ intentions in Latin America and an almost constant suspicion coloring reaction to anything Washington does or says regarding the area.” Other pieces reported fairly when Toriello denied that the Arbenz government was fomenting strikes in Honduras. (It was not, of course.)

One cannot tell which of Gruson’s stories pushed Allen Dulles over the edge. In “The Brothers,” his 2013 book on the Dulles siblings, Stephen Kinzer writes that it was his too-fair coverage of Arbenz’s land reform policies—an absolute no-no, given Arbenz nationalized 400,000 acres of fallow land owned by United Fruit. But those pieces were published in May 1952, two years before Gruson’s case came to a head.

The CIA had been building one of its bizarrely insinuating files on Gruson—he was a Comm symp, in the jargon of the day, “a dangerous character towing the Communist line,” as John Foster put it—since at least 1952. But here is the key sequence:

In the last days of May or the first of June 1954, Allen Dulles messaged Arthur Hays Sulzberger, the Times’ publisher (and grandfather of the current publisher) to say he wanted Gruson out of Guatemala. On June 3, Sulzberger telephoned Dulles to say he would get it done. The coup operation started June 18. By June 27 Arbenz was gone.

Gruson went on to grander things, but we can leave this narrative here. There are some things to think about in it.

First, Gruson’s case was not an isolated incident, as many scholars have established. Sulzbeger and Dulles had a close working relationship, and the Times’ history of collusion with Washington extends back much further than the 1950s.

Second, the coup began a period of military rule, civil war and repression that killed (no one yet knows the accurate number) 140,000 to 200,000 people by the time it ended in 1996. Think about how differently this period might have turned out had the Times given Dulles the shove he deserved, reported the corrupting request itself and then left Gruson in place to cover the coup.

Finally, we have the way the Times let its role in Cold War Guatemala slip unnoted into the past—but not history—until it could no longer avoid publishing anything about it. Only in 1997, when relevant CIA files were declassified, did the paper come even partly clean. Two years later, when Bill Clinton spent half a day in Guatemala City and delivered an official apology, the Times reported the occasion as if… well, as if it were an ordinary newspaper doing its job and had nothing to do with the gruesome tragedies the U.S. visited upon generations of Guatemalans.

I do not have Gruson down as any kind of heroic figure. Apart from his very evident competence and a certain charisma, his status as a sort of demigod in the profession derives from how precipitously standards and ethics have declined from his day to ours. At the Times, one generation of editors and correspondents passeth away and the next, next and next measureth not up.

Readers of the Times should have this ever present in their minds now, for the implications grow more serious as we speak. However much Washington may like to pretend otherwise, the impunity the Dulles brothers invoked in everything they did no longer applies—and should not, of course. There will always be consequences from here on out.

Equally, wars are fought now with computer programs, with money—and with information. An incompetent or corrupted correspondent can cost lives and worsen the planet’s now-endemic instability.

To stay in Latin America briefly, there is the case of William Neuman, the Times correspondent covering Venezuela. Put Neuman next to Gruson and you either laugh or do the other thing.

This guy is not even good at being bad. Lionizing provocateurs and overprivileged elites as noble democrats, scoffing at documented instances of American meddling in the Venezuelan political process: If, as appears the case, President Maduro is in the same place Arbenz was in, say, 1952, the Times will bear a variant of the responsibility it bears for its corruptions in 1954 and thereafter.

The worst and most worrisome, and the case prompting this column, is the Times’ Moscow bureau, from which Ukraine is covered. It swooned long ago from media war into barely varnished propaganda. The propaganda war is getting as dangerous as the war on the ground, if not as bloody. It is closing too many minds now and, in the end, makes the ground war possible by cultivating among us a climate of hatred, paranoia, intolerance and confusion. It starts to feel pre-war, the way summer air grows heavy and still before a storm.

“What remains incontrovertible is that Ukraine is Mr. Putin’s war.”

The above sentence appeared in a Times editorial last Friday, the very day it reported Minsk II, the second attempt to achieve a lasting cease-fire. Think about it. Hold it up to the light and turn it this way and that. This column began the moment I read it.

First, it is patently untrue. It is one of those cases wherein making the assertion implicitly proves its falsity. If Moscow’s culpability were so incontrovertible as that, no one would have thought to write the sentence. The editorialist doth protest too much.

Second, what kind of editorial judgment has it that this is the responsible thing to publish immediately after Russia and the European powers—which excluded Washington, pointedly—labored 17 hours at a mahogany table to get a peace plan, however flimsy, in place? As a measure of the paper’s dignity, people of Gruson’s generation would quake.

Third, talk about ad hominem. It is one thing for correspondents to indulge themselves in pieces listing Putin’s “expensive watch” as proof of his irremediable tyrannies—yes, one of the above-named pulled this stunt last year—but it is altogether another for New York editors to peddle such junk as “Mr. Putin’s war.” Again, no dignity. (And shame on the foreign-desk editor who failed to cut the expensive watch bit.)

Last, miss this not: It is the reporting coming out of the Times bureau in Moscow that makes the indefensible sentence possible.

The day after the editorial appeared and a day before the cease-fire was even to begin, the Times took Washington’s word for it that Russia had already begun a new supply of ordnance into Ukraine. Russia: Yes, of course, the country that helped broker the cease-fire. Source: Jen Psaki, the State Department spokesperson, highly reliable always. In this case her veracity rested on this: “We are confident that these are Russian military, not separatist systems.”

Confident, as in so many instances over the past year. Does anybody at the Times ever get tired of the State Department’s confidence?

Here is the new truth of the Ukraine crisis: Washington wants this cease-fire to fail as swiftly as possible so it can get on with the job of arming Ukraine, provoking further tension with Russia and advancing as close as it can to the Russian border, the better to destabilize the Putin government. This remains my take on the American motivation.

With this thought in mind, the Times now fights the propaganda war on two fronts, it seems to me.

Reflecting a 21st century version of the relationship with power that obtained in Sydney Gruson’s time, it remains enlisted in Washington’s cause as just described. In days to come we are likely to hear all about how Russia is sabotaging whatever peace is eventually achieved. Minsk II failed because the man with the expensive watch can never be trusted. The feeble Europeans ought to have known this. Now for the weaponry.

Equally, the Times has a war of its own to wage now. The body of evidence as to Washington’s primary responsibility in Ukraine is simply so substantial now—incontrovertible, indeed—one loses interest in arguing the case. More interesting now is what lengths the Times will go to get out of the corner it has painted itself into. And what the Times does the rest of the American media will do, like a pack of penguins. The question is thus important.

So far the Times guards its investment in a false narrative by investing more in it. As things go now, in 50 years some young Times reporter will lay out the Ukraine crisis as it truly was and a carefully attenuated account of the Times’ part in it. It is a shame this cannot happen now.

Reason No. 1: Its reputation, at a time its credibility is already in question in a number of spheres, would take too damaging a hit were it to dial back. Reason No. 2: This is a large, institution-wide rendition of the access game. Mind your manners and do as you are told and you will continue to get all the leaks, the whispered tips, the documents no one else sees, the exclusive interviews with “senior administration officials.” (When, incidentally, was the last time a Times reporter ever spoke to an official who was not “senior”?)

Fail to mind your manners, goes without saying, and one way or another we will make a Sydney Gruson of you.

It is true my craft has betrayed me, notably the Times, where I worked in one capacity or another on two separate occasions. But one wants to take these editors and correspondents by the collar and shout, “Straighten up!” mostly because if they got their backbones in order they would go a long way to forcing Washington to straighten up, too, and get with the 21st century program.

Alas. All sorts of people do things today that threaten the planet but serve their narrow interests. In the climate-change case it can make the jaw drop. Now it comes to do so in the newspaper game, too.

← Saving Ukraine: Why the IMF’s Bailout May not Work
For Greece Now, It’s Political and Economic Mess →