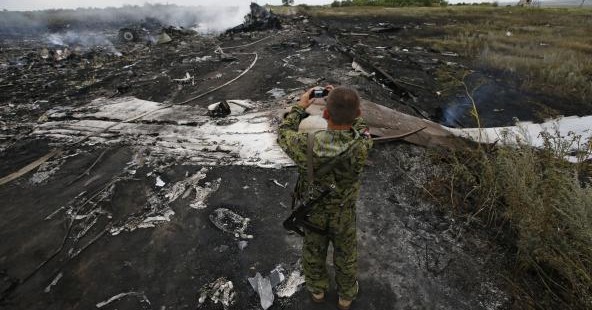 Is the ever-tougher economic squeeze of Russia for its not-quite-clear role in the Ukraine crisis a 21st century rerun of the Treaty of Versailles, the recklessly punitive settlement that turned out to be the mulch of the global conflagration that defined the five decades following 1945?

These remain far-fetched propositions, and thank goodness. Awful enough, though, that they now appear in the conversation at all.

The Obama administration appears to view the MH17 tragedy as the moment to mount the full-court press against Russia it has long spoiled for. Presenting accounts of evidence but no evidence, it reported at the end of last week that Moscow is about to send heavier ordnance into Ukraine and is poised to engage its own military units—effectively an invasion.

Next day came news that the Pentagon is developing plans to provide battlefield intelligence to enable Kiev’s forces to target the rebels’ missile sites—effectively a military engagement.

History will advise us as to the wisdom of this strategy. So far, Germany and the rest of the Europeans remain well distant from a military response of any kind.

The economic strategy is less violent, of course, but it now starts to look more worrisome. Not even Chancellor Angela Merkel’s Germany—the frontline leader of the frontline European nation—is any longer stepping back from a regime of highly punitive, highly provocative sanctions against the Russians.

The European Union’s announcement last week of new economic measures against Russia is qualified. It will not immediately block “access to capital markets, defense, dual use goods, and sensitive technologies,” as the E.U. communiqué reads, pending Moscow’s cooperation into the MH17 tragedy and the establishment of a new ceasefire.

O.K., sensible. But the threatened measures, reaching far beyond a few of Vladimir Putin’s closest cronies, are not far short of a cruise missile compared with what the Europeans have lobbed in to date. Everyone, let’s say, is now seated around the long mahogany table at the Versailles palace.

Equally, it is important to recognize the extent the threatened new sanctions are already operative. This column has explored the “stealth sanctions” phenomenon in previous weeks. These amount to market reactions and they appear to be escalating by the day.

Last week, just as the Russian foreign ministry announced cancellation of a scheduled debt auction in view of poor market conditions, Nomura Holdings threw another log on the fire in an investor note saying it was closing out its ruble bond positions because the threat of new sanctions has “meaningfully increased.”

Related: Why Europe Is Hesitant to Punish Russia

A day later, Norway’s immense sovereign wealth fund—at $890 billion the world’s largest—said it will review its $8 billion in Russian assets. It is taxi fare for the fund, obviously, but a whack to the Russians and a big roll of the snowball.

This weekend, the Russian central bank had to raise interest rates to a choking 8 percent to support the ruble and stem a worsening flow of flight capital, which equals $75 billion already this year. In a blog item Saturday, Ambrose Evans-Pritchard, The Daily Telegraph’s business editor, called the current quiet in Russia’s financial markets “the calm before the storm.”

Keeping things as sour as possible for Moscow, the arbitration court in The Hague is due to rule Monday on the $103 billion damages suit filed after Russia confiscated Michail Khodorovsky’s Yukos Oil Co. 10 years ago. Moscow has lost all intermediate rulings since.

“When I was last involved in this file, in its early stages, the lawyers were telling us that the first stages would be the most difficult,” a well-placed contact in global financial markets wrote in an e-mail note over the weekend. “They thought if they could get the case to this stage, there was a pretty good chance that the plaintiffs would win.”

Related: Did Russia Just Push the World to the Brink of War?

A decision against Moscow would open the way for seizures of Russian assets—oil and gas cargoes, for instance—in Europe.

There are a couple of savers in this for the Russians. One, it has no pressing need to accumulate more sovereign debt right now. Two, with Brent crude averaging $109 so far this year, it can take a certain amount of tough stuff in the bond markets.

But there are things to consider beyond the circumstantial. Sanctions start to work before they start to work, for one thing. They are kinetic, like unstable minerals—hot to handle, easily out of control.

“Economic sanctions are to modern statecraft what mounted lancers were to war in the trenches: magnificent but useless,” Simon Jenkins, a British commentator, noted in over the weekend. “Their continued deployment defies study after study showing them as cosmetic, cruel, or counterproductive.”

Staying on the counterproductive side, here are four unintended and undesirable consequences of the sanctions strategy as we now have it:

All this is what the West wants as the outcome in Ukraine at this moment? I follow Keynes in his unheeded critique of the Versailles settlement: I don’t get the cost-benefit equation on this one.

← Propaganda ministers, all of them: Our pathetic, spoon-fed media pushes half-truths, again
Jill Abramson’s sad admission: “I don’t think the press, in general, did publish any stories that upset the Bush White House” →