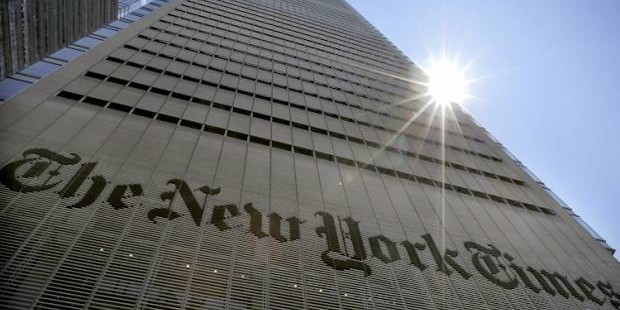 By withholding details of Edward Snowden documents, the paper of record shows it cares more about power than news

Ever since Edward Snowden made his daring leap into the kingdom of his own conscience last spring, I have tried and tried but can’t find a single American–even among Snowden’s most uncomprehending critics–who can mention one thing he has told us that we wish we did not know.

But I think I am onto something now.

The latest in the Snowden case suggests that beyond all the revelations of the National Security Agency’s corrosively unlawful doings, Snowden has things to say that we simply cannot take—not at the moment, in any case. Things such as why Snowden truly frightens us (or some of us) and how he has exposed critical and potentially fatal fault lines in our worse-for-wear American polity.

Maybe someday we will be up to facing these things. If we are fortunate. If we can restore some of the extraordinary thinking that went into the making of “America”—the idea of America, I mean—and bring it into a new century. Then we will be able to hoist aboard Snowden’s larger meaning—a meaning it is not clear he yet grasps himself.

We had a telling couple of days in the Snowden story at the end of last week. From his exile in Russia, Snowden addressed a letter to German Chancellor Angela Merkel and handed it to Hans-Christian Ströbele, a deputy in the Bundestag and a member of the Green Party. Ströbele and two German journalists were in Russia to meet Snowden—the two hacks to interview him.

The letter is now public, via the German weekly called Focus and the Guardian, and courtesy of the good people at the aggregator RSN, Reader Supported News, on this side of the ocean. I find it overly optimistic on Snowden’s part, a trait I have detected in him before. Have a look:

“… the outcome of my efforts has been demonstrably positive…”

Things look different when one is far from home, let us allow for this. I was living abroad when Barack Obama was elected, and I stopped just short of a Cantonese version of “Amazing Grace.” Since Snowden’s wise flight from a near-certain lynching, I have been disheartened times ten by the response in the U.S.; the outcome—so far, one has to say—has been demonstrably frightening.

Snowden’s intent was to offer Germany his services amid the new fracas prompted by more Snowden-originated revelations—prominent among these the NSA’s eavesdropping on the German chancellor. In the face of the Obama administration’s transparent dissembling—say nothing in many spongy words—the German government would like to hear what the remarkable geek has to tell them.

“If Mr. Snowden is prepared to speak to the German authorities, we will find opportunities for that meeting to take place,” said Hans–Peter Friedrich, the interior minister. N.B.: Friedrich is no Green, no colleague of old Danny the Red. (Remember him, Cohn–Bendit, Paris 1968?) Friedrich is fully credentialed in Merkel’s Christian Democratic coalition.

Berlin’s request is reasonable—and significant. It knocks all remaining struts from under the Obama administration’s already wobbly assertion that Snowden is a criminal and need be treated in no other fashion. It is no longer possible for anyone to argue that he has done only harm. Heads of state now acknowledge his service to the global community. He has made a contribution to the shared problem of relentlessly advancing technology, our management of it and America’s Faustian bargain with it.

Here is the nub of it now. Edward Snowden is welcome in Germany. This takes things beyond sanctuary in Venezuela, or Cuba, or Bolivia, or any other nation cast as fringe-y among the orthodox (and against all of which one can hold pretty much nothing). But he cannot come home. Time to ask why. We have not asked this yet.

There are two parts to this question.

Most immediately, the Obama administration and the intelligence community he may or may not control have but one commitment. This is to sustain global, illegal sweeps of data at the forward edge of capability, and the edge moves outward more or less constantly. What we hear from our nation’s capital splits neatly in half: Yes, we must have our “national conversation” on the matter of surveillance. No, there is little prospect of altering the current course.

The latter point is crystal clear in any review of official utterances. The most stringent dissent one hears at senior levels in Washington is articulated by figures such as Diane Feinstein, the Democratic senator from California. Feinstein raised her voice when the Merkel revelations came out. But she supports the surveillance program; her objection was that intelligence committees in Congress were out of the loop. Terrible thing, this. Cannot have it.

At the moment, Washington and the media have packaged consideration of the surveillance question as a well-wrapped choice between “liberty and security”—the most common of several such phrases. This is illusory; the frame does not hold the picture.

Snowden at home would disrupt this now-containable arrangement. This is his virtue and his curse. A national “debate” now intended to relieve political pressure but lead nowhere would assume consequence were Snowden present among us. His status as a criminal would fall apart. Many of us would ask to hear as much as the Germans now want to hear. The liberty-and-security charade would break its banks. In the end, security derives from liberty, of course. The alternative thought is to profess a suspicion of democracy’s outcome.

The second half of the question, then. It appears that many among us are not prepared to consider as we should what the country is doing in our names and what we are allowing to be done to us (and others, of course). This matter extends well beyond secrets and intrusions. Snowden’s most fundamental threat—or value, depending on where one sits—is to show us the true extent of our democracy’s subversion and the collapse of the ethos that must be in place to propel it.

The obvious reference here is to the deformation of national institutions and the powers they are assigned. We are far over the line in this respect, and (as noted in this space last week) self-correction is a questionable expectation by any detached measure of the predicament. Snowden has pushed our faces into this daunting reality—daunting because recognizing it requires of us genuine thinking, genuine change, a genuine embrace of “becoming,” as in becoming something more than we are.

It is not merely Washington, not by a long way. It is the blurring of many lines that were put in place for reasons. To the financially minded, would you care to explain in the “comment” box below why Glass–Steagal was thrown over the side and why, in the face of ruinous consequences, it has not been rescued? This is two degrees of separation from the Snowden case.

Then we have the media, very key in the Snowden affair. In a long piece on the NSA in the New York Times a couple of days ago, the correspondent pauses midway and puts in parentheses: “(At the agency’s request, the Times is withholding some details that officials said could compromise intelligence operations.)”

There is a critical breach here. It is not new—the first time I saw this kind of confession of collusion in the Times was in 2008—but it no longer shocks as it did then. Snowden has escalated matters. We have questions to put before moving calmly on to the next paragraph.

Is it the place of the press to consult the government as to printing material it has obtained? (Too dangerous. The press is located as it is in democracies to fulfill a crucial role. Distance cannot be crossed.) Is the press supposed to take the government’s word as to what would “compromise” national security? (Did we learn nothing during the 20th century? Can we not situate ourselves in history?)

Another question comes to me only lately. What kind of operations are we told would be compromised? The kind that murder innocent civilians? Disrupt legitimate governments? Such discriminations go by the board? (They cannot unless one accepts a dreadful complicity. Consider drones. Consider the coup in Egypt to which Washington gave the nod, Cold War–style.)

On the BBC the other week, Jill Abramson, the Times’s executive editor, came to the defense of the indefensible with this remark. “Responsible journalists do care, as citizens do, about national security and the safety of citizens.” It is worth quoting because it is a concise summation of the argument in full.

And it is flaccid. It is precisely the kind of middling logic that makes the Times, in spite of the worn-out pose, such a middling newspaper. The explicit point is apple-pie obvious. The implications are pernicious. Ponder it. You will see right through to the other side.

One cannot say what Abramson means by “responsible journalists,” but given the population of her newsrooms and bureaus the probabilities are upsetting. Responsible journalists grasp their ethical responsibilities, worry not about where chips fall and do their jobs, and in so doing are good citizens. That is how they contribute to security and safety. The rest is a swamp. Advocating, collapsing boundaries, making a “we-and-they” of the world are not the tasks of journalists. Claiming the right to decide what people should and should not know is preposterous—so stupid one cannot even call it arrogant.

We finish with our man.