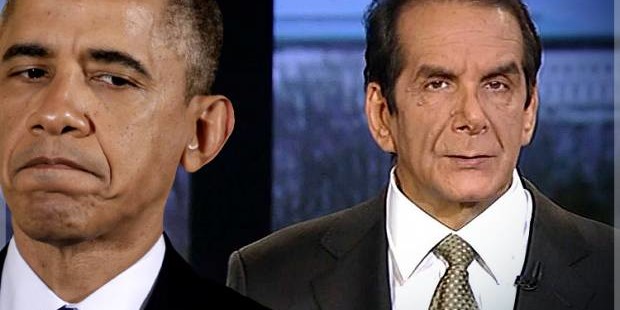 President Obama has just advised us that the front edge of our country’s foreign policy has shifted — shifted again, that is to say. Pivots, resets, evolutions, rethinks, and the like — none coming to much — are all the Obama administration’s strategy abroad consists of. Empty as the wind, these periodic reports from the White House are nonetheless important to follow, the latest more than any other.

This one came Wednesday in the president’s commencement address at West Point. The venue is logical if very regrettable, given that it reflects the extreme militarization of our foreign relations so far in our century. We are now served “this new chapter in American foreign policy,” as Obama told the cadets of the Class of 2014. There is nothing remotely new in the president’s plans, but they deserve attention nonetheless: In the nothing new lies a significant disclosure of just what this administration intends to accomplish and pass on.

“Literally pointless,” Charles Krauthammer, the neoconservative commentator, said of Obama’s address on Fox News. “It didn’t have a point. It was a defensive speech.”

I have waited long and patiently for the chance to agree with this pugilistic exceptionalist, and he makes the chances few. But the moment is not all I expected. Pointless and defensive, yes. But Krauthammer misses the paradox: In Obama’s pointlessness lies the point: He makes no point on foreign policy because he is not permitted one. In the defensive tone lies a confession that the man of resets and pivots is paralyzed.

Equally, I give this speech more stature than the neocons are willing to allow. My read: Obama wanders, but this is a significant reiteration. It is a Democratic president’s Axis of Evil speech, all too much with us already and now recapitulated from the other tendency within the orthodoxy.

“Here’s my bottom line: America must always lead on the world stage,” Obama declared. “If we don’t, no one else will. The military that you have joined is, and always will be, the backbone of that leadership.”

These thoughts would be retro coming from any president, but they are shockingly so coming from the man of change. They bespeak a conception of America’s place in the world that is almost hopelessly stagnant. Eternal leadership; without us, chaos; indispensible nation: These themes had no validity even at origin — and not least the last, an invocation of Madeleine Albright, among the most visionless secretaries of state in the last century.

But then this from the president, up on the banks of the Hudson:

But the world is changing with accelerating speed…. From Brazil to India, rising middle classes compete with us, and governments seek a greater say in global forums…. It will be your generation’s task to respond to this new world.

A changing world, an unchanging stance toward it: There can be but one take-away here, and it is vital to grasp it if we are to understand what our country is doing in the world these days and why.

It is this: The American condition today is one of confusion — confusion and a consequent fear of the world beyond our shores that has been too prevalent in American thinking since a century before the founding. We do not seem able to act but in ways our leaders consider tried and true, even as the tried woefully often prove not true.

Let me try this another way. An era of American primacy has finished, and the many, many smart people among us understand this. These Americans are able to see their nation in historical terms — Obama, to his credit, hinted at West Point of the need to think historically. But many others, and too many of them in positions of power, have little grasp of how to use history to see straight and are closely tied to a version of our predicament rooted in myths that are faded but still familiar to all of us.

The result is what Obama truly put before us at the U.S. Military Academy this week: We cannot sensibly continue to act as we have in the past, but we can continue insensibly and best get ready, for we shall. We cannot respond otherwise, cannot imagine anew, and we are too uncertain of ourselves to innovate.

This outcome can be attributed to several practical factors, in my view. There are institutional interests — deep government, as it is called. There is circumstance: The world presses multipolarity upon America, and a century of dominance leaves the policy cupboard bare. We also have a weak leader when both of the above — entrenched bureaucracies, unthought-of tasks — require one as strong as this nation has had since FDR. Obama, to take the silly phrase of his supporters, is not the one.

It has been a lively week on the foreign policy side, certainly. Obama made an unannounced visit to Afghanistan — after a dozen years of a military presence, still it comes to surprise visits — and set a timetable for the withdrawal of U.S. troops. They will linger until 2016, but as Tim Shorrock just revealed in a Salon exclusive, arrangements for a large complement of mercenaries are already in place.

Simultaneously, the White House began this week to let it drop that it plans to increase the Pentagon’s role on the ground in Syria to something short of a troop deployment but probably including advisors in a training capacity, early Vietnam-style, and Obama confirmed this to the Class of 2014: “I will work with Congress to ramp up support for those in the Syrian opposition who offer the best alternative to terrorists and a brutal dictator.”

Well, whoever they may be. In the past these sorts of alternatives have frequently turned out to be terrorists and brutal dictators — honest history is clear on this — and the Syrian “insurgents” (I have lost all track of what to call them) show every promise of taking their place in the line.

But the main event in Obama’s newest version of “new” was the West Point presentation of what the think-tank set pretentiously calls “grand strategy.”

At the core lies a significant capitulation on the part of the president, who told another set of military graduates — at the National Defense University a year ago — that the war on terror must end. “For the foreseeable future,” Obama said, “the most direct threat to America at home and abroad remains terrorism.”

From this flows an assertion that terrorist threats are now more “diffuse” — a key word in this presentation — than in the old Al Qaeda days. The planet now explodes with terrorist “affiliates,” and we’d better get used to this term, too. The follow-on is a determination to respond full-tilt while addressing the long-obvious problems of imperial overstretch and blowback.

The diffusion theme I find especially worrisome. It pushes America toward the delusion of totalized threat, universalized still more than Bush II’s version and yet another iteration of the paranoia that has been our inheritance since the 17th and 18th centuries. It is hard to believe Obama is trafficking in this trade, but there it is.

As to the rest, Obama’s plan in sum is to choose our wars more carefully, shift yet further toward counterterrorism — covert action, drone assassinations — and form local partnerships. Given the need now to translate so much of what Washington says, in the same but truthful language the last means cultivating client regimes and proxies to do the local propaganda job or the dirty work or both.

Obama is fighting a war in this speech. But it is not the one the media describe, between interventionists and isolationists, or militarists and realists. Krauthammer, Sen. John McCain and others are correct that Obama set up straw men at West Point, the easier to knock them down.

The war is over presentation, primarily. It concerns how to tell us Americans that we will continue to execute an aggressive, interventionist foreign policy rooted primarily in military power — the use of it here or there, the threat of it everywhere else, with more emphasis on the everywhere else when possible.

There is nothing of consequence that is new in the kind of rebalancing adjustments Obama has just presented to us as his “vision.” It has not been clear for some time whether Obama actually has a vision, but to the extent he may have had ambitions on the foreign side, he has just acknowledged defeat.

Mark Lander, the New York Times’ State Department correspondent, described a $5 billion Counterterrorism Partnerships Fund, intended to finance training programs, as a “new policy announcement.” Do we so easily forget all the training the U.S. provided during the Cold War, in situ and at police and military facilities here and there in the South, the consequences of which are repellent to think about?

As so often in these circumstances, Obama’s greatest failing as he opens the door on his political exit strategy is one of omission. Lacking entirely from his not-new policy project is any effort to address the question of causality. However much we live in a world of proliferating terror groups, why? Nothing on this from the president.

This has been key to waging the war on terror from the first Axis of Evil presentation onward. “We must decontextualize terrorism. Any attempt to understand it is an attempt to justify it,” Richard Perle, provider of bogus intellectual ballast for the Bush administration, famously asserted after the September 11 attacks. “Just wage total war,” he further elaborated.

Perle’s decontexualizing is a grave mistake, and Obama is officially on board for this now. So long as terrorism is treated solely as a crime unworthy of any attention otherwise — another of Perle’s urgings — we can look forward to ever more of it.

I cannot be the first to suggest that example is the very core of the strongest and most effective leadership, always, and on this point Washington has led America nowhere in the age of terror. True weakness, not just Obama’s brand but across the board, lies in an incessant recourse to the past. And this is all our leaders have on offer.