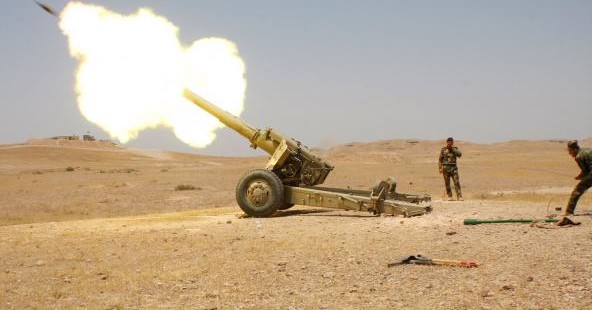 Even the Pope Wants to Stop ISIS; Shouldn’t Obama?

To bomb or not to bomb? That is the debate as we watch the extremist militants of ISIS rampage through Syria and Iraq with the intent of establishing a caliphate that erases the borders between the two.

Many members of Congress are fully committed to a bombing campaign. “The threat ISIS poses only grows over time,” Senators McCain and Graham wrote in Sunday’s New York Times. “It cannot be contained. It must be confronted…. Such a strategy would require our commander in chief to explain to war-weary Americans why we cannot ignore this threat.”

President Obama, who has always stood among the war-weary, wavers per usual. Pope Francis just came out in favor, saying a counter-attack on ISIS falls under the “just war” doctrine.

New York Times columnist David Brooks said on NPR Friday that we had better accept that going in with bombs—which he favors, and on both sides of the Iraq-Syria border—will eventually require sending special-operations forces, if not ground troops. “The irony of the Obama administration, it’s going to get a lot more militarized in the last two years,” Brooks told the hosts of All Things Considered.

Policy wonks generally favor bombing, but cautiously so and there are straight-out objectors on the left. John Feffer argues in Foreign Policy in Focus, “If the United States doesn’t do something stupid—like bombing this newly declared caliphate and its army—ISIS will likely be consumed by the fires of its own extremism. It’s best to remind the administration that ISIS is like one of those creatures in a horror movie that only grows stronger the more drone strikes or artillery shells that it absorbs.”

There is a lot to support this position. We have a nine-year war in Iraq behind us and a 13-year war in Afghanistan still to wind down. In front of us, we have the Afghan would-be nation that may or may not end up incorporating the Taliban in its government, and Iraq in sectarian smithereens sprouting the most grotesque flower of evil yet to come out of the region’s arc of crisis.

Related: The Key to Solving Both ISIS and Russian Aggression

We all remember the high-school chemistry experiments with mercury. Are we about to take a hammer to a spoonful of it and, paradoxically, shatter the element in a thousand pieces even as it remains intact? Thirteen years after the September 11 attacks, we cannot ignore this question.

With these thoughts in mind, this column is a modest contribution to the conversation, and excellent it is we are having it. Yes, we have to bomb. But there is way more to this than a short answer.

First of all, we have to distinguish between a quick, sharp bombing campaign with a limited, clearly defined objective and another open-ended intervention. The latter course would have us doing more mercury experiments in no time.

Thomas Reese, a Jesuit and a good papal interpreter, said this in his piece in the National Catholic Reporter last week: “Francis was very careful in what he said and what he did not say. In saying, ‘It is licit to stop the unjust aggressor,’ he said, ‘stop,’ not ‘destroy,’ ‘conquer,’ ‘push back,’ or ‘defeat.’ Stop, only that and nothing more.”

Related: What ISIS Really Wants (Besides Your Head)

You can take or leave this as teaching, but it happens to be good foreign policy. Reese added, “This limited goal will not please the hawks.” He is right, but there is plenty of history around to counter them.

Second, let’s fasten onto a sub-theme among those favoring a bombing campaign. “This requires a comprehensive strategy, presidential leadership, and a far greater sense of urgency,” McCain and Graham wrote Sunday. “If Mr. Obama changes course and adopts a strategic approach to defeat ISIS, he deserves support.”

In her much-noted interview in The Atlantic a few weeks ago, Hillary Clinton spoke about militant Islam as a question to be understood comprehensively. “History never stops and nationalisms were going to assert themselves, and then other variations on ideologies were going to claim their space,” Clinton told Jeffrey Goldberg. “Obviously, jihadi Islam is the prime example.”

In the same exchange, Clinton spoke about “smart power,” meaning American engagement but not necessarily American military engagement. All good. What would “a comprehensive strategy” and “smart power” look like in the case of ISIS, then?

Related: Feinstein Takes Obama to Task for Caution on ISIS

I find the answer in the twilit months between the September 11 attacks and George W. Bush’s Axis of Evil speech to Congress the following January. Alert readers will recall this unusual period. The task was to connect militant Islam to the countless deprivations afflicting the Middle East: Poverty, the absence of everything from democratic processes to education and clean water made the region a fetid swamp where terrorists hatched like mosquitoes. The talk was of a Marshall Plan to transform it top to bottom, as the original did in postwar Europe.

We never got there. Instead, we “decontextualized” terror, to take the term coined by Richard Perle, one of Bush’s noted intellectual supports. “Any attempt to understand terror is an attempt to justify it,” Perle famously argued. “It simply needs to be fought and destroyed.

Time now to recognize Perle as the original chemistry professor. Events have proven him dead wrong. Terror needs to be fought and destroyed, but not simply.

ISIS presents an exceptional case. Bomb it, yes—but as a necessary humanitarian act. A follow-on intervention, out of the question. And we can start the comprehensive strategy McCain and Graham call for with this bit of smart power: The Arab monarchies whom Washington supports and who, in turn, support ISIS and other jihadists can be coerced into spending their millions on a down payment for a new, internationally sponsored Marshall Plan in the Middle East. Much of the region will surely respond favorably.

ISIS has given the world a great deal of horror in a very short time. Perversely enough, it also gives us all a moment of opportunity.

← It’s time to bomb ISIS: Yes, America helped sow these seeds, but this is the rare group that should be called “terrorists”
The Mess Obama Made on the Way to the So-Called Ceasefire in Ukraine →