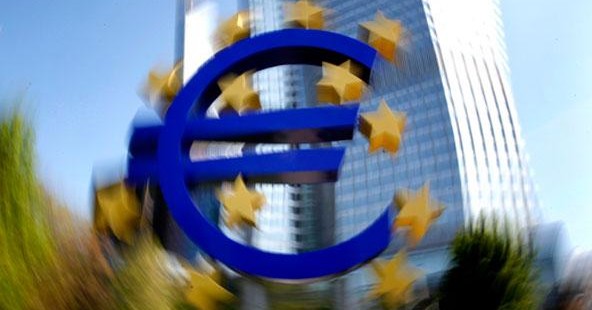 Europe’s ‘Ogre of Deflation’ Is Rapping at the Door

All eyes on the European Central Bank this week. Its Governing Council meets Thursday in Frankfurt, and ECB President Mario “Whatever It Takes” Draghi will have to announce an historic interest rate cut if he is to earn his middle name and fend off a crippling case of Japanese-style deflation.

Analysts continue to mince words, but for my money the deflation battle was joined at the end of last week, when Eurostat, the E.U.’s number crunching agency, announced that annualized consumer price inflation fell in January to 0.7 percent, from 0.8 percent in December.

Reuters had previously polled the markets and produced a forecast of 0.9 percent. So the eurozone is heading in the wrong direction faster than investors had thought.

Related: Why the Global Economy Could Go Off the Rails in 2014

Deflation sets in when prices cease rising and begin to fall. But zero, well to remember, isa mathematical notion. (The Indians claim to have invented it, but they borrowed from the Babylonians, and the Mayans had already figured it out independently.)

The eurozone is not technically in deflation, but Eurostat has just told us it is deflating. Draghi, then, has no business waiting for the 18–member zone’s “zero” moment. Action then would come far too late.

Look at it this way and Thursday’s session in Frankfurt is not a hard call. The ECB dropped its benchmark interest rate to an historic low of 0.25 percent last November. That same month, the eurozone’s CPI tipped south and has not stopped falling since. More is needed, plainly.

So in another way zero will matter greatly when Draghi convenes his crew: The central bank has to put both feet into the monetary-stimulus game and give the eurozone a zero percent interest rate. People in the markets are divided—some expect this to arrive Thursday, some next month—but there is near-unanimity that it is Draghi’s next move.

The good old ZIRP, zero interest rate policy, is an obvious thing to do in the eurozone context. It is not exactly uncharted territory: The U.S. and Japan have both been there, done that. Draghi is staring secular stagnation in the face. Overshooting—prompting hyperinflation—cannot be among his worries. The thought of a bubble—well, let us say he should be so lucky if a modest one came along right now.

Draghi appears more given to interest-rate cuts than quantitative easing, and it is not clear why. I follow Wolfgang Münchau, the Financial Times commentator, on this point: There are no risks for Europe now, and the strategy brings down long-term interest rates, which is what Draghi wants to stimulate a sustainable recovery. The U.S. and Japan have proven the point.

The FT printed a good graph after Eurostat released its data last Friday, showing price changes in the U.S., Japan, and Europe over the past year. You can see just when the Fed started talking about the “tapering” policy (down went inflation) and when Ben Bernanke, then the Fed’s chairman, told the markets nothing too precipitous was in the plan (up it went again).

In the Japan case, the chart is a kick. You can spot the very day (April 4) Bank of Japan Governor Haruhiko Kuroda announced that the BOJ was expanding asset purchases to $1.4 trillion over the next two years. Japan was deflating at nearly 1 percent at the time. The central bank announced last Friday that inflation reached 1.3 percent in December.

Japan’s two-year target for sustained inflation is 2 percent. So is the eurozone’s. Historically, Japan shares with Europe an absolute phobia on the inflation question, reflecting periods of uncontrollable price rises in the past. (The Weimar years in Germany are an obvious example.) This in part explains why the BOJ seemed to sit on its hands for more than a decade of deflation before it got with the program. Draghi cannot now afford to fight the last war in the same fashion.

The man does say some odd things. At the Davos gathering last month he told the assembled that Europe was in for “dramatic improvement” in 2014. He professed confidence that the eurozone would meet that 2 percent inflation target.

On what grounds, this confidence? Draghi spoke exactly a week before Eurostat reported the January number. In hindsight his remarks read like either happy talk—very disconcerting at this moment—or complacence.

At the same confab, Christine Lagarde spoke more forcefully about the “ogre of deflation,” as she called it. It is far more to the point. Europe started this year knowing that modest gains reported in third-quarter 2013 marked the beginning of the truly hard work, the end of nothing. Committing to a vigorously expansionary monetary policy is a good first step, though it will be the first of very many—and in no way the hardest.

← You’re being lied to about Afghanistan: The terrorists there include us
How the White House Is Blowing Off Europe →