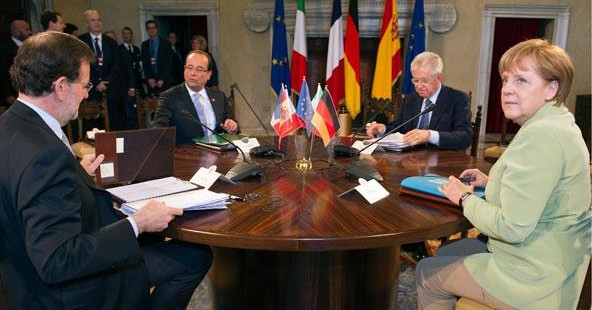 On the face of it, last week did not look like a very good one for Europe—not if you think it is time to push growth as well as fiscal discipline. Just days after Spain announced a $79 billion package of spending cuts and tax increases—including a rise in the value-added tax (VAT) from 18 percent to 21 percent— it was clear that the bond markets were still not satisfied.

Spanish debt finished the week well over the informally recognized limit (7 percent), when governments have to start thinking about bailouts because they can’t afford to borrow. Greece, meantime, was busy with its own European-mandated round of pay, pension, and social spending reductions. We will see what comes of that.

Are we still stuck with the question of whether the cure for Europe is worse than the disease? Here is another one worth posing: How much can Americans learn from Europe’s continuing debacle and the methods they are trying to get out of it?

International agencies are starting to weigh in. In its quarterly economic outlook, theInternational Monetary Fund has cut its forecast for global economic growth this year to 3.5 percent, down 0.1 percent from April’s number and the fund’s lowest projection in three years. The forecast for the eurozone: a drop of 0.3 percent. The American growth number is 2 percent, down 0.1 percent since April’s outlook.

A day later the International Labor Organization in Geneva reported that the eurozone stands to sacrifice 4.5 million more jobs over the next four years if it stays on its current course. In May, European joblessness hit 17.5 million, a record 11.7 percent, and it is much worse, of course, in the countries suffering the worst economic problems. “It’s not only the eurozone that’s in trouble,” Juan Somavia, the ILO’s director-general, said in releasing the report. “The entire global economy is at risk of contagion.”

What are these two international agencies calling for? As if in unison, they both urged policy makers to forget the status quo and start a big round of growth and job-stimulating policies. In other words, pay more attention to managing demand. The urgency the two agencies attach to this strategy, notably but not only in the European case, is unmistakable. Frightened would not be too strong a term for their sentiments.

But let’s look at this another way. Despite the generous grounds for skepticism, Europe appears to be at the start of a sea change. In this respect the IMF and the ILO may well prove the singing canaries. We are beginning to witness—over the next months and years—a shift toward policies informed by Europe’s long social-democratic tradition and its long effort to unite itself as a community with shared obligations.

I trace this nascent trend to the election last December of François Hollande as France’s first Socialist president in nearly two decades. Hollande has gone straight to work in his own garden. Last week he unveiled a plan intended to raise an additional $8.8 billion in taxes, mainly on the wealthy and large corporations, to get France’s 2012 budget where it should be. To put more money in people’s pockets, he has also raised France’s minimum wage to a record. Hollande aims to reduce France’s public deficit to 4.5 percent of GDP this year and 3 percent (the EU’s mandated ceiling) in 2013.

The markets are behaving very strangely amid all this—well, strangely for the markets, anyway. For all of the painful, unpopular labors of Spain’s conservative prime minister, Mariano Rajoy, the price of Spanish debt finished the week at a stunning 7.185 percent. Last week France sold $9.3 billion in three-month, six-month, and one year debt withyields of less than zero. Bond investors are paying to invest in French paper because they think that under Hollande it is safe.

If there is a shift in Europe’s political and economic thinking of the kind I describe, it is bound at times to look like a standoff between France and Germany. Last week gave us a good example of this, too.

After Rajoy pushed through his latest austerity policies, German Chancellor Angela Merkel had to capitulate on a key issue. She agreed to European rescue funds $122 billion worth of relief for Spanish banks—something she has long resisted with rigor. Hollande led that fight against the recalcitrant Merkel (who now has hell to pay at home).

Merkel did not create Germany’s tough line on the eurozone crisis. It is more a measure of how the two countries, Germany and France, have absorbed or rejected the classical liberalism that Americans have made something close to a worldwide gospel over the past two decades. To make a too-simple generalization, neoliberalism has had a greater impact in Germany than in France; Mrs. Merkel has simply been the leader that has made it show—as Margaret Thatcher was in Britain 25 years ago. In France, it proved as shallow as Nicholas Sarkozy, the conservative leader Hollande defeated.

Americans stand to learn a great deal from the European experience about how to manage a stricken economy back to solid growth. Certain policies work, certain others are too costly in political and social terms, and still others work in combination but not on their own.

But I have serious doubts that American elected officials and voters will take away anything approaching such lessons. It is a question of history, and how ours differs from Europe’s.

The social-democratic tradition, along with others, dates to the nineteenth century in Europe. Whatever one thinks of social democracy, it reflected a period of enormous enrichment among European leaders and thinkers as it moved away from rule by an aristocracy. We Americans missed this. We held fast to our belief in eighteenth-century liberalism as the perfect theory in our perfect world.

American policy differs in fundamental ways again because it’s founded on a belief in the power of the individual, not a ruling family. And maybe it’s because the country—and it’s expanse of open lands— has encouraged the notion that anyone can stake a claim and enjoy the fruits of one’s labor.

But America is more complex than today and needs a new variation of that paradigm to thrive in the 21st Century.  We can watch what goes on across the pond—and we should, given America’s considerable exposure to Europe’s fate—but it is doubtful that Europe’s lessons will prove available to us, in this election year or in any other.