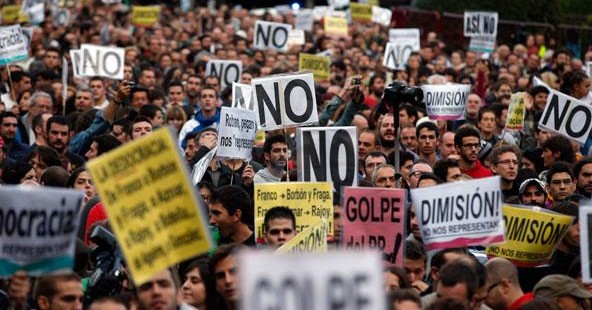 Spain is Exhibit A. Prime Minister Mariano Rajoy was in for a tough week no matter how the cake got sliced. On Thursday, Madrid unveiled the outlines of its next national budget featuring a fifth round in less than a year—yes, a fifth—of budget cuts and tax increases. This one represents a $52 billion contraction in government spending, which is equal to about 0.8 percent of economic output.

Naturally, the streets of Spain’s major cities erupted in (more) protests; demonstrators in the capital surrounded parliament. Many economists say the budget is not severe enough to work. Nonetheless, the bond markets were pleased. The cost of Spain’s 10-year sovereign paper fell to below 6 percent.

On Friday we learned just how weak the Spanish banking sector is, after many months of wondering. Last June Rajoy’s government requested $129 billion in European Union funds to recapitalize Spanish banks. An independent audit released at the end of the week showed that Spanish institutions will need $75 billion of that money. So the banks may not be as bad as they looked.

But now look what Rajoy has on his hands. Spain has 17 autonomous regions within its borders. The most powerful of these is Catalonia, in the northeast, and the Catalans will have an election in November that is shaping up as a referendum on Rajoy’s reforms and—entirely related—a political break with Madrid and an independent Catalonia.

A disintegrating Spain is an unlikely outcome at this point. But the Catalans are a headstrong lot. More than this, the centrifugal forces Rajoy faces say something important about what the euro crisis is doing to European societies. They are gradually getting pulled apart.

Spain happens to have mechanisms, the autonomous regions, through which voters can decide, in theory, that they simply want to get off the bus. Greece and Portugal have no such structures, but the same thing is happening in these nations nonetheless.

Hundreds of thousands of Portuguese turned out on the streets of Lisbon last week after Prime Minister Pedro Passos Coelho announced an austerity plan that would adjust social security payments this way: The employers’ share of pension contributions would drop by 5.75 percentage points; the employees’ share would rise by 7 percentage points. “Robbing workers to pay their bosses,” the Portuguese railed. It is hard to argue with them in this case.

Passos Coelho had to back off. He is now looking for alternative ways to shrink the national deficit so that Portugal can secure the next tranche of its $101 billion bailout—a check for $5.6 billion due by the middle of October.

As to the Greeks, it looks as though they are just about at their limit. On Friday, Prime Minister Antonis Samaras announced $17.4 billion in new spending cuts and taxes that Athens will take into negotiations with its international lenders. But this was not before Yannis Stournaras, finance minister in the center-right coalition now governing Greece, had a bitter and public exchange with an official from the International Monetary Fund, one of Greece’s lenders. Watch for more violent demonstrations as Samaras pushes through his latest austerity measures. Stournaras’s point was that the government may not be able to withstand them.

It is clearer with each passing day that what we are watching in Europe is a contest between market preferences and democratic government. Rajoy, Passos Coelho and Samaras are trying to walk what they think is a middle line and coming out looking like they have been drawn and quartered. We now have investors jumpy about European debt markets because, they say, recession is hampering recovery—that is, the recession caused by too much of the austerity they wanted to see.

Intrade, the internet betting parlor that permits punters to wager on various political and economic outcomes, gives odds of  58 percent that at least one member of the euro zone will fall out of it by the end of 2014. In other words, it is a likelihood that the eurozone as we know it has a bit more than two years to live.

I do not buy this. But it will have to be sooner than the end of 2014 for European leaders to come up with new notions of where the middle ground lies between reform and democracy. Example: Why not raise property taxes instead of incessantly cutting wages? It preserves spending power and consumption. Example: The Europeans have bought into the American idea that one cannot raise taxes on the wealthy. This notion is exhausted, as the streets of Europe indicate. Higher taxes on higher incomes is a perfectly defensible strategy and would relieve a great deal of pain while adding very little.

Footnote: As southern Europe burns, all is less than well in Germany. Chancellor Angela Merkel proved herself a true European when she supported Mario Draghi, the president of the European Central Bank, in his plans to buy bonds from distressed euro zone members. But the headwinds at home are growing stronger. Both Greece and Spain are asking the EU and its lending institutions for more money, and the markets want them to do so. Merkel’s euro skeptic opponents in Berlin—ironically members of her own center-right Christian Democratic Union—have made it plain there will be a fight if Germany is asked to dole out more funds. Merkel, so far, is flinching.

Merkel’s CDU adversaries are wrong. And they reek of ultra-right prejudices. The euro crisis belongs to Germany as much as to anyone else. Think about this: German banks are more exposed in Spain than any other nation’s banks. It is not quite $50 billion, according to the Bank for International Settlements. It is perfectly plain how this came to be: Incautious lenders in Germany were key to inflating the bubble that eventually popped in Spain.

← U.S. China Policy: Incoherent and Dangerous
Sanctions Will Turn Iran into Another Cuba →