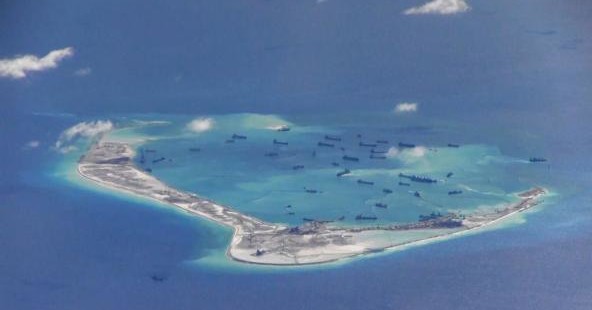 Behind the Tensions Over China’s Artificial Islands

There are two useful ways to view the current dispute over the artificial islands China is building atop reefs in much-contested zones of the South China Sea. It’s a mistake to see China’s construction projects in the Spratly Islands as much out of the ordinary: They aren’t. It’s another mistake to miss the larger implications of the tension that has arisen over the past couple of weeks.

There are a lot of dimensions to this latest round of trans-Pacific friction. It’s about

territorial sovereignty, undersea resources, secure sea-lanes, and the projection of Chinese power. How these are ordered up depends on who’s doing the talking.

Related: If US Interferes in China’s Land Grab, ‘War Is Inevitable’

China’s southerly neighbors, such as the Philippines, Malaysia, and Vietnam, grow more nervous with every bucket of sand and coral the Chinese shape into solid ground. Washington is none too pleased, also.

At the moment, the responses to China’s notably assertive stance on the status of the long-disputed Spratlys are two:

China’s islands-from-nothing create challenges that must be answered. One, the Spratlys’ status under the U.N.’s Law of the Sea and other relevant legal codes has been left unresolved for decades. Beijing has no case whatsoever that unilateral action in this circumstance is constructive.

Two, nobody from Beijing to Washington thinks it’s a good idea to destabilize a region that is (a) in flux and fragilely balanced, and (b) essential to its trade-oriented economies, China’s most of all. Again, China’s determination to take a deservedly influential place in the Pacific isn’t served so long as what it does induces anxiety elsewhere in Asia.

Two questions, simply posed but not at all simple, have to be answered now.

First, what are China’s intentions as it emerges as a regional and global power? For too long we’ve trotted out leftover Cold War prejudgments no longer of any use.

Second, what are Washington’s purposes? This column has argued that when it looks across the Pacific it lives in the past and can’t see straight.

It was a Filipino fisherman trawling off the Spratlys who first spotted “this huge Chinese ship sucking sand and rocks from one end of the ocean and blasting it to the other using a tube.” That was in October 2013. Since then, China has created about 2,000 acres of new land atop reefs above or below sea level depending on the tides.

We’re taking this activity too seriously. The antidotes are history and precedent.

Five nations—the Philippines, Vietnam, Taiwan, Malaysia, and Brunei—lay claim to the Spratlys, and several have erected primitive fortifications or shelter on land reclaimed from the sea. The argument that China is different because it is creating new land instead of building out from shorelines is important only to maritime lawyers.

Going further back, Japan took an atoll 1,000 miles south of Tokyo, called it an island, and claimed sovereignty in 1931. The U.S. re-recognized Okinotori Island as Japanese in 1968. Its land consists of three concrete blocks protruding slightly above the waves, on the basis of which Tokyo claims a surrounding EEZ—an exclusive economic zone—of 154,000 square miles. Beijing doesn’t even recognize Okinotori as an island, to say nothing of the EEZ.

Get clear of the legal thickets and the core problem is clearer. The rest of East Asia is nervous about China’s emergence as a power, but this reflects its size and old alignments, not any evidence of ill intent. Of the latter, there is none.

In response to Secretary Carter’s demand in Singapore, Adm. Sun Jianguo, a senior military official, asserted that Beijing was primarily concerned with fulfilling its “international responsibilities and obligations”—meaning, in this case, assuming a role in maintaining maritime security. In my read, taking up such duties reflects China’s genuine desire to earn recognition as a responsible power. Anyone who knows the Chinese understands the importance they attach to this in numerous contexts.

That conference in Singapore was especially revealing of Washington’s reading of China’s intentions. Carter read straight from the Cold War playbook, in my view, and this habit is getting more than unproductive: It’s this we must take more seriously now: It’s starting to suggest potential dangers.

Citing an airstrip already under construction on newly built acreage, Carter’s perspective was old-school strategic: Beijing’s intent is military control of the seas. “It is unclear how far China will go,” the defense secretary said, plainly playing to the region’s uncertainties.

Chinese officials and analysts see old habits and discrimination in these remarks, and they have a case. Let’s not forget: Current tensions over a situation many years in the making began when a U.S. jet entered the Spratly’s airspace as a challenge to China’s sovereignty claim.

“We will remain the principal security power in the Asia-Pacific for decades to come,”Carter said when he stopped at Pearl Harbor en route to Singapore. The worrisome aspect of this statement is simply put: It is wholly unrealistic.

Washington’s conundrum across the Pacific, setting aside many differences, is not unlike its current stance toward Russia: It can either accept a former adversary as a partner with common interests, as both Beijing and Moscow propose, or it can stand against both to no positive outcome.

In the Pacific case, true security lies in necessarily protracted negotiations to resolve the many conflicting claims to maritime sovereignty now besetting the region. This is to be taken more seriously. But Washington has done next to nothing to engender such diplomacy.

← We are the propagandists: The real story about how The New York Times and the White House has turned truth in the Ukraine on its head
Markets Fear the End Game for Greece as IMF Gives Ukraine a Free Pass →