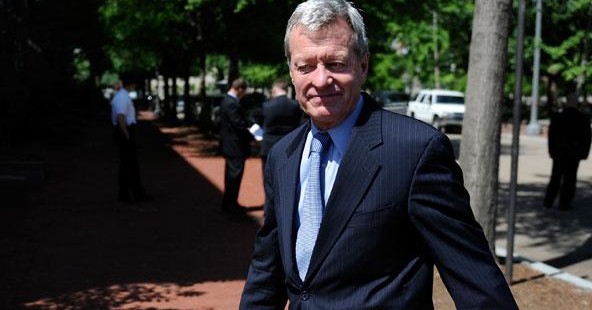 Why Baucus Is the Wrong Man as China’s Ambassador

There are several reasons President Obama just named Max Baucus, the long-serving senator from Montana, as his next ambassador to China. There are also several reasons to judge Baucus the wrong man in the wrong place at the wrong time even though his will almost certainly be a cake-walk confirmation in the Senate early next year.

This appointment, rumored for a month and announced late Friday, deserves scrutiny because it comes at a critical moment: Obama has a lot to get done—with care and sophistication and ever more urgency—across the Pacific.

Related: Is China Trading a Flyzone for a Growing Economy?

Baucus, while not without accomplishment, is ill-equipped for the task. The Chinese are certain to view his arrival as evidence of an almost willful refusal in Washington to take a relationship amid a profound rebalancing seriously.

Having reported in Asia for three decades, I see Baucus as another tile in a mosaic with a repeating pattern. He is the latest example of a long deterioration in America’s diplomatic appointments in the region, notably in China and Japan.

Domestic politics, loyalty, campaign support, and sometimes bloodlines too often trump gift, training, intellect, and grasp of what the world looks like from the country where an ambassador’s task is to explain the U.S. to others and others to the U.S.

Baucus boasts a 35-year record as a six-term centrist Democrat. He is the longest-serving member of the Finance Committee in Senate history. He lent crucial support to George W. Bush’s 2001 tax cuts, and, two years later, to Bush’s Medicare bill. As Politico just observed, without Baucus, Obama would have no health-care law.

More recently (and more relevantly), Baucus was key in getting trade promotion authority—TPA, otherwise known as fast-track approval—through the Senate, and this will prove essential when the nearly completed Trans–Pacific Partnership comes up for legislative approval. Once in Beijing, the new envoy will take up the bilateral investment treaty (BIT among the policy wonks) Washington and Beijing are now negotiating. If completed, this will open banking, services, and other sectors of the Chinese economy to U.S. businesses.

All O.K. But why is the administration settling for O.K. when top-notch intellect, skill, and background are self-evidently the desperately needed technologies? It borders upon reckless.

It is all too uncomplicated. Baucus gets Beijing as a reward for long and loyal service to Democratic administrations, and specifically for his key support for Obama’s biggest projects. As with Secretary of State Kerry, Obama chose a senator who is sure to win collegial approval and avert ideological and political skirmishes.

Related: China Grows Impatient with the Barbarian of North Korean

Obama scarcely invented the practice of turning embassies abroad into prizes. But he has taken it to an extreme that threatens America’s ability innovate in an environment that requires innovation of any nation hoping to prosper peacefully in a new century.

“The appointment process now is the worst I’ve ever seen it,” a policy adviser under several administrations told me the other day. “You just can’t get good people in when work on the campaign back in Chicago matters more than anything else.”

His take is dead on. “It’s not that these people are bad, although you get your mediocrities,” he tells me. “They just don’t have heft. I look at Baucus and the best I can say is, it could be a lot worse.”

“Scary” is too strong a word just now, but it could prove right in short order. A lot of history and a lot of ambition have put China and the U.S. acutely at cross-purposes over a few short years.

Washington’s interest in China has been about access since the China dreams of 18thcentury merchantmen, and Baucus is a measure of how little has changed. Xi Jinxing, China’s assertive new leader, expresses nothing so much as the mainland’s desire for great-power status and redress of sovereignty abuses and exploitations dating to the Opium Wars of the late–1830s and early–1840s.

Washington once fielded diplomats who were up to these complexities, which now run to airspace disputes, territorial claims in the East China Sea, the Korean question, and bristly relations between Beijing and Tokyo. They were the sons of missionaries or had lived in China or spoke Mandarin—or all three.

The last of this breed, by the reckoning of good Asia hands, was J. Stapleton Roy, who was born in Nanjing and taught in China until Mao denounced him and kicked him out in 1951. Roy served four years as ambassador, ending in 1995.

“Thoughtful, he earned the knowledge, capable of leadership—they don’t make them like that anymore,” my think tank friend says with chagrin. “There’s a quality issue now.”

Gary Locke, whom Baucus will replace, is a case in point. He is of Chinese–American ancestry and served as Obama’s first commerce secretary. A likely choice, you might say. But with no evident understanding of the larger picture and no amplitude, for want of a better term, Locke goes down as having improved visa-application processes.

We used to see the same syndrome across the water in Tokyo. Thomas Foley, Walter Mondale, Mike Mansfield—they all came from Capitol Hill and, let us say, had trouble with chopsticks. The Japanese foreign ministry faced them with bureaucrats trained in the Confucian tradition who had thought about the same things since their days at Tokyo University. “Institutional memory,” we used to call it, and if you sat in Tokyo it was painfully clear Washington sent little across the ocean.

Listening to Caroline Kennedy in late November, as she delivered her first address as ambassador—on China’s new claim to airspace off its coastline—I confess to thinking we had another regrettable case in point at just the moment we could not afford one. But maybe not.

Prior to departing Washington, my sources in the capital tell me Kennedy went face-to-face with the dedicated experts known as ‘Japan hands’ who had little inclination to cut her an inch of slack. Kennedy won the day, I am told—displaying a disciplined, fulsome study of the issues she would confront in Tokyo. So we can wait and see on this appointment.

As to Baucus, it appears Washington will be treading water at best while he is in Beijing, and that is a bad outcome at this moment.

← Get over yourself, New York Times. You’re not standing up to anyone
Our Orwellian reality: Drone wars, surveillance, a lapdog media — and you →