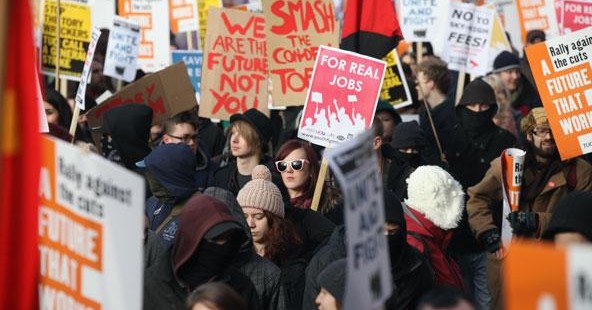 The government shutdown may have been averted, but the fiscal dispute confronting Washington is about to get even louder.  Congress once again has to agree to raise the debt limit or default on our obligations which could have “catastrophic” consequences for the economy according to Fed Chairman Ben Bernanke.

The alternative, of course, is to cut spending dramatically, a choice favored by the Tea Party and Paul Ryan (R-WI).  But the Tea Party and others should be careful what they wish for.  A radical austerity plan can have serious consequences.  Just ask the British.

Prime Minister David Cameron railroaded the U.K. into a regime of drastic fiscal austerity as soon as he was elected last May. With the budget unveiled late last month, the strategy is fixed for the next four years:

In contrast, the Labour opposition has argued for fewer spending cuts spread over a longer term, and more modest targets. It wants to bring the deficit down to 3 percent of GDP by FY 2015, which meets the European Union’s standard, and to make the cuts-to-taxes ratio 60-to-40 instead of Osborne’s 75-to-25.

There are two big differences between Cameron’s plan and Paul Ryan’s so-called “Path to Prosperity” budget: one is taxes (Cameron’s plan raises taxes and cuts spending for defense as well as other programs.  Ryan’s plan has no tax increases and leaves Defense essentially untouched.  Another big difference is that the British are ahead of the U.S. by way of timing: They are nearly a year into a radical-austerity strategy, while the U.S. teeters at the edge of one.

Cameron announced an “emergency” set of spending cuts last June, less than a month after his election, and by year end the economy was heading south: Fourth-quarter growth was –0.5 percent, against a market expectation of +0.4 percent.

Although the bond market responded favorably to Cameron’s plan when it was announced, it’s now possible that Britain may be heading for a double dip recession, with their economy growing at 1/3rd the pace of other world economies.  And Cameron has been forced to rethink his defense cuts ever since the British military entered the fray inLibya.

No one has a certain read on this yet, but other signs are discouraging. Unemployment, now at 8 percent, is trending upward—by 0.2 percent in the year to the end of February; Cameron and Osborne have already cut 123,000 public-sector jobs, and no one assumes they are finished on that front.

What the U.S. can take away from this is a clear-eyed look at sectoral analysis, in economists’ parlance. Demand has to come from the public sector, the private sector, or the external sector (meaning exports). With households nervous about jobs and income, and business nervous about nervous households not spending, you do not have to be Keynes (or accept his thinking) to recognize what even the expectation of drastic cuts in government spending will do to jobs, investment, and growth.

“How do you plan to cut deficits without offsets from the private sector?” asks Marshall Auerback, an economist and global strategist at Madison Street Partners, a Denver hedge fund. “Why would any business invest when the outlook for aggregate demand is so bad?”

On this count, the U.S. would be climbing into the same boat as Britain were the Obama administration and Congressional Democrats to capitulate to Republican demands for more cuts this year beyond the $39 billion agreed to on Friday, and Ryan’s $4 trillion plan to transform Medicare, Social Security, and other programs.

But amid all the talk comparing Britain and the U.S., there are trans–Atlantic differences. I see two at work just now.

For one thing, there is Britain’s parliamentary system. With no distinction between the executive and legislative branches and with party loyalty a matter of course, a newly elected parliament will be able to implement a new set of policy priorities much more swiftly than a newly elected Congress. America’s presidential system, which often seems ill-suited for fast, twenty-first century decisions, is for once serving it well.

There is also public reaction to consider. You would hardly know it from the news coverage—there was nearly none, oddly—but Britain went briefly ablaze after Osborne presented his budget. The following weekend, somewhere between a quarter of a million and half a million Britons took to London’s streets in protest.

Anything like this kind of public response is unlikely in the U.S., regardless of the outcome of Washington’s current debates, and it is interesting to reflect upon why. Americans, unlike the British, have no awareness of themselves as members of a society of fundamentally opposed interests. We have struggled with this notion for most of our history. But, somehow and always, the assumption that “we’re all in this together” seems to prevail, no matter how evident it is that we are not.