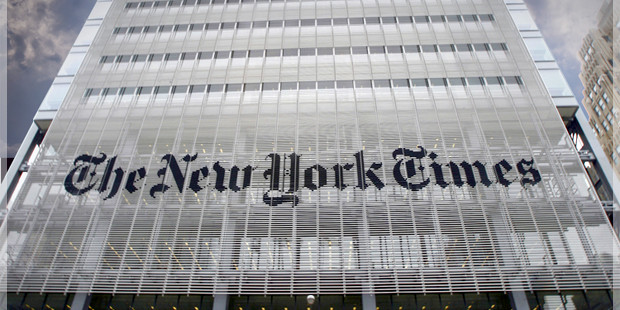 The New York Times does its government’s bidding: Here’s what you’re not being told about U.S. troops in Ukraine

U.S. troops are now operating openly in Ukraine. The “paper of record’s” “coverage” is an embarrassment, per usual.

As of mid-April, when a Pentagon flack announced it in Kiev, and as barely reported in American media, U.S. troops are now operating openly in Ukraine.

Now there is a lead I have long dreaded writing but suspected from the first that one day I would. Do not take a moment to think about this. Take many moments. We all need to. We find ourselves in grave circumstances this spring.

At first I thought I had written what newspaper people call a double-barreled lead: American soldiers in Ukraine, American media not saying much about it. Two facts.

Wrong. There is one fact now, and it is this: Americans are being led blindfolded very near the brink of war with Russia.

One cannot predict there will be one. And, of course, right-thinking people hope things will never come to one. In March, President Obama dismissed any such idea as if to suggest it was silly. “They’re not interested in a military confrontation with us,” Obama said of the Russians—wisely. Then he added, unwisely: “We don’t need a war.”

Don’t need a war to get what done, Mr. President? This is our question. Then this one: Washington is going to stop at exactly what as it manipulates its latest set of puppets in disadvantaged countries, this time pretending there is absolutely nothing thoughtless or miscalculated about doing so on Russia’s historically sensitive western border?

The pose of American innocence, tatty and tiresome in the best of times, is getting dangerous once again.

The source of worry now is that we do not have an answer to the second question. The project is plain: Advance NATO the rest of the way through Eastern Europe, probably with the intent of eventually destabilizing Moscow. The stooges now installed in Kiev are getting everything ready for the corporations eager to exploit Ukrainian resources and labor.

And our policy cliques are willing to go all the way to war for this? As of mid-April, when the 173rd Airborne Brigade started arriving in Ukraine, it looks as if we are on notice in this respect.

In the past there were a few vague mentions of an American military presence in Ukraine that was to be in place by this spring, if I recall correctly. These would have been last autumn. By then, there were also reports, unconfirmed, that some troops and a lot of spooks were already there as advisers but not acknowledged.

Then in mid-March President Poroshenko introduced a bill authorizing—as required by law—foreign troops to operate on Ukrainian soil. There was revealing detail, according to Russia Insider, a free-standing website in Moscow founded and run by Charles Bausman, an American with an uncanny ability to gather and publish pertinent information.

This is a lot of dry-run maneuvering, if you ask me. Poroshenko’s law allows for up to 1,000 American troops to participate in each of these exercises, alongside an equal number of Ukrainian “National Guardsmen,” and we will insist on the quotation marks when referring to this gruesome lot, about whom more in a minute.

Take a deep breath and consider that 1,000 American folks, as Obama will surely get around to calling them, are conducting military drills with troops drawn partly from Nazi and crypto-Nazi paramilitary groups…. Sorry, I cannot add anything more to this paragraph. Speechless.

It was a month to the day after Poroshenko’s bill went to parliament that the Pentagon spokesman in Kiev announced—to a room empty of American correspondents, we are to assume—that troops from the 173rd Airborne were just then arriving to train none other than “National Guardsmen.” This training includes “classes in war-fighting functions,” as the operations officer, Maj. Jose Mendez, blandly put it at the time.

The spokesman’s number was “about 300,” and I never like “about” when these people are describing deployments. This is how it always begins, we will all recall. The American presence in Vietnam began with a handful of advisers who arrived in September 1950. (Remember MAAG, the Military Assistance Advisory Group?)

Part of me still thinks war with Russia seems a far-fetched proposition. But here’s the thing: It is even more far-fetched to deny the gravity of this moment for all its horrific, playing-with-fire potential.

I am getting on to apoplectic as to the American media’s abject irresponsibility in not covering this stuff adequately. To leave these events unreported is outright lying by omission. Nobody’s news judgment can be so bad as to argue this is not a story.

Last December, John Pilger, the noted Australian journalist now in London, said in a speech that the Ukraine crisis had become the most extreme news blackout he had seen his entire career. I agree and now need no more proof as to whether it is a matter of intent or ineptitude. (Now that I think of it, it is both in many cases.)

To cross the “i”s and dot the “t”s, as I prefer to do, the Times did make two mentions of the American troops. One was the day of the announcement, a brief piece on an inside page, datelined Washington. Here we get our code word for this caper: It will be “modest” in every mention.

The second was in an April 23 story by Michael Gordon, the State Department correspondent. The head was, “Putin Bolsters His Forces Near Ukraine, U.S. Says.” Read the… thing here.

The story line is a doozy: Putin—not “the Russians” or “Moscow,” of course—is again behaving aggressively by amassing troops—how many, exactly where and how we know is never explained—along his border with Ukraine. Inside his border, that is. This is the story. This is what we mean by aggression these days.

In the sixth paragraph we get this: “Last week, Russia charged that a modest program to train Ukraine’s national guard that 300 American troops are carrying out in western Ukraine could ‘destabilize the situation.’”

Apoplectically speaking: Goddamn it, there is nothing modest about U.S. troops operating on Ukrainian soil, and it is self-evidently destabilizing. It is an obvious provocation, a point the policy cliques in Washington cannot have missed.

At this point, I do not see how anyone can stand against the argument—mine for some time—that Putin has shown exemplary restraint in this crisis. In a reversal of roles and hemispheres, Washington would have a lot more than air defense systems and troops of whatever number on the border in question.

The Times coverage of Ukraine, to continue briefly in this line, starts to remind me of something I.F. Stone once said about the Washington Post: The fun of reading it, the honored man observed, is that you never know where you’ll find a page one story.

In the Times’ case, you never know if you will find it at all.

Have you read much about the wave of political assassinations that erupted in Kiev in mid-April? Worry not. No one else has either—not in American media. Not a word in the Times.

The number my sources give me, and I cannot confirm it, is a dozen so far—12 to 13 to be precise. On the record, we have 10 who can be named and identified as political allies of Viktor Yanukovych, the president ousted last year, opponents of a drastic rupture in Ukraine’s historic relations to Russia, people who favored marking the 70th anniversary of the Soviet defeat of the Nazis—death-deserving idea, this—and critics of the new regime’s corruptions and dependence on violent far-right extremists.

These were all highly visible politicians, parliamentarians and journalists. They have been murdered by small groups of these extremists, according to reports readily available in non-American media. In my read, the killers may have the same semi-official ties to government that the paramilitary death squads in 1970s Argentina—famously recognizable in their Ford Falcons—had with Videla and the colonels.

The Poroshenko government contrives to assign Russia the blame, but one can safely ignore this. Extreme right members of parliament have been more to the point. After a prominent editor named Oles Buzyna was fatally shot outside his home several weeks ago, a lawmaker named Boris Filatov told colleagues, “One more piece of shit has been eliminated.” From another named Irina Farion, this: Death will neutralize the dirt this shit has spilled. Such people go to history’s sewers.”

Kindly place, Kiev’s parliament under this new crowd. Washington must be proud, having backed yet another right-wing, anti-democratic, rights-trampling regime that does what it says.

And our media must be silent, of course. It can be no other way. Gutless hacks: You bet I am angry.

I end this week’s column with a tribute.

A moment of observance, any kind, for William Pfaff, who died at 86 in Paris late last week. The appreciative obituary by the Times’ Marlise Simons is here.

Pfaff was the most sophisticated foreign affairs commentator of the 20th century’s second half and the first 15 years of this one. He was a great influence among colleagues (myself included) and put countless readers in a lot of places in the picture over many decades. He was a vigorous opponent of American adventurism abroad, consistent and reasoned even as resistance to both grew in his later years. By the time he was finished he was published and read far more outside America than in it.

Pfaff was a conservative man in some respects, which is not uncommon among America’s American critics. In this I put him in the file with Henry Steele Commager, C. Vann Woodward, William Appleman Williams, and among those writing now, Andrew Bacevich. He was not a scholar, as these writers were or are, supporting a point I have long made: Not all intellectuals are scholars, and not all scholars are intellectuals.

Pfaff’s books will live on and I commend them: “Barbarian Sentiments,” “The Wrath of Nations,” “The Bullet’s Song,” and his last, “The Irony of Manifest Destiny,” are the ones on my shelf.

Farewell from a friend, Bill.