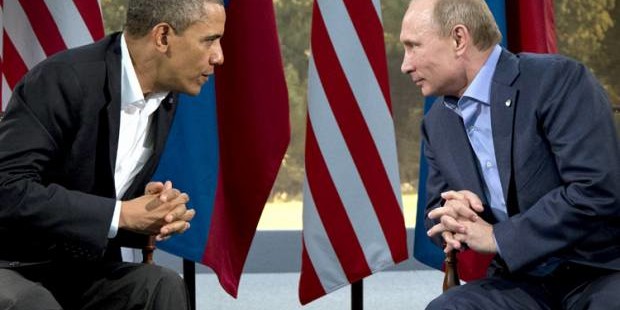 Propaganda, lies and the New York Times: Everything you really need to know about Ukraine

The media keeps buying the American spin on what’s happening in Ukraine. Let’s cut through the fog

You need a machete these days to whack through the thicket of misinformation, disinformation, spin, propaganda and straight-out lying that daily envelopes the Ukraine crisis like kudzu on an Alabama telephone pole. But an outline of an outcome is now faintly discernible.

Here is my early call: We witness an American intervention in the process of failing, and the adventure’s only yields will be much pointless suffering among Ukrainians and life for years to come in the smothering embrace of a justifiably suspicious Russian bear.

Nice going, Victoria Nuland, you of the famous “F the E.U. tape,” and your sidekick, Geoffrey Pyatt, ambassador in Kiev. Nice going, Secretary of State Kerry. For this caper, Nuland and Pyatt should be reassigned to post offices in the bleak reaches of Kansas, Khrushchev-style. Kerry is too big to fail, I suppose, but at least we now know more about what caliber of subterfuge lies behind all those plane trips, one mess following another in his jet wash.

On the ground, Vladimir Putin continues to extend the Russian presence in Crimea, and we await signs as to whether he will go further into Ukraine. This is very regrettable. Viewed as cause-and-effect, however, it is first a measure of how miscalculated the American intervention plot was from the first.

Pretending innocent horror now is a waste of time. The Ukraine tragedy is real estate with many names on the deed. This must not get lost in the sauce.

On the diplomatic side, the big charge now is intransigence. Washington calls Moscow intransigent because Vladimir Putin and his foreign minister, Sergey Lavrov, decline to talk to the self-appointed government in Kiev, which Putin refuses to recognize. Moscow calls Washington intransigent because Kerry declines to meet Lavrov unless the latter agrees first to meet the Kiev provisionals.

The American line: The provisionals are legitimate, they are democrats worthy of support, and there was no coup when they hounded President Viktor Yanukovych from office Feb. 21. The protesters behind them with clubs, pistols and bottle bombs are democrats, too.

The Russian line: The provisionals are illegitimate, they took power in a coup driven in considerable part by nationalist fanatics with a fascist streak evident in their ranks, they are now dependent on same, and they merit neither support nor recognition.

This is it as of now, simplified but not simplistic, story and counter-story.

It is difficult but not impossible to interpret these narratives. The first step, admittedly hard for many Americans, is to drop all Cold War baggage and see beyond the West’s century-and-a-half habit of demonizing Russia as the emblematic power of the inherently autocratic East. “Oriental despotism” was a passing fad conjured by a scholar-stooge named Karl Wittfogel in the late 1950s. It died a deserved death — around the time of hula hoops, I think — but the prejudice lingers, remarkably, in many Western minds.

Here comes the bitter bit. The Russian take in the Ukraine crisis is more truthful than the artful dodge Washington attempts. The above forecast of the outcome rests on the thought that the dodge is simply too flimsy to last.

You cannot make a call such as this without looking closely. So let’s.

Putin and Lavrov are open to negotiations with the U.S. and the European Union. Putin commits to supporting Ukrainian elections set for May and backs the agreement struck between Yanukovych and his opponents just before the latter abandoned it and deposed him, even as Putin did not like it at the time. No, Moscow does not recognize the provisionals in Kiev, with sound reasons, but it does not require that Washington drop its support before getting to the mahogany table.

In the climate our media have generated, I almost feel the need to apologize for this but will refuse: I cannot locate the intransigence in this.

Now to Kerry and President Obama. Last week Lavrov invited Kerry to Sochi for face time with Putin, and Kerry considered it. Then he abruptly declined on the argument that the Russians must first commit to talks with the new crowd in Kiev. Here is the problem: Kerry’s demand does not hold up as a precondition; it is logically a point of negotiation. Set it as a precondition and you have, so far as I can make out, intransigence.

What is the preoccupation with a Moscow-Kiev gathering, anyway? This gets interesting, and you have to recall the dramatis personae in the Nuland tape of Feb. 7.

Insisting on direct talks between Russia and the provisional government in Kiev is to insist the former recognize the latter, a trap Putin cannot possibly be stupid enough to fall into. Recognition, in turn, would complete the Nuland-Pyatt project to gift Ukrainians with a post–Yanukovych puppet government. This is Kerry’s unstated intent.

It is remarkable what a good road map the Nuland tape has proven. She mentioned three names in her exchange with Pyatt: Arseniy Yatsenyuk, Oleh Tyahnybok and Vitali Klitschko. The first, Nuland’s favorite, is now prime minister; Tyahnybok was running ahead of Yanukovych in polls at the time Nuland was taped and remains the vigorously anti-Russian head of Svoboda, a power-balancing party of rightists; Klitschko is not in the government but plans to run for president in the May elections.

This is precisely the constellation Nuland described as her work in progress: Yatsenyuk in, the others more useful outside for now. As a measure of Washington’s unseemly haste to lend legitimacy, Obama meets Yatsenyuk in Washington as I write — an unelected leader of who knows whom sitting in the White House.

Just for good measure, Nuland also mentioned one Robert Serry, a U.N. official Washington arm-twisted Ban Ki-moon into sending to Kiev to give a veneer of multi-sided consensus. And there was Serry in the news last week — when Crimeans chased him across their border at gunpoint. They must be reading the papers carefully, those Crimeans.

At writing, the Obama scrum is debating whether to impose swift, cutting sanctions on the Russians (the political people) or ease off for fear of self-inflicted damage (the trade and business people). Leading the charge for tough stuff are none other than Nuland and Pyatt.

Maybe they are scared of getting sent to Kansas if the project does not come good.

The more I scrutinize it, the more the American case on Ukraine is held together with spit and baling wire. Were I Obama or Kerry, I would be looking for an out by now, cutting losses on a commitment to intervention that was sheer hubris from the first.

Significantly in this connection, the contorted logic of just who is running things in Kiev is soon to fail, in my view. Washington is all out in denying the character of the protest movement and the provisionals, casting Putin as a paranoid in his characterizations. It is wishful thinking. Incessantly repeated untruths never transform into truths.

The decisive influence of ultra-right extremists, some openly committed to an ideology of violence, some whose political ancestors sided with the Nazis to oppose the Soviets, is a matter of record. Svoboda and Right Sector, the two most organized of these groups, now propose to rise into national politics. Right Sector’s leader, Dmytro Yarosh, intends to run for president. The New York Times just described him as “an expert with firebombs” during the street protest period.

These people are thugs by any other name. One cannot see how this can be in question — or why the Times suggests that Russia’s descriptions of them as such amount to “a fun house mirror.”

And it is no good pretending their influence does not continue. They remain in the street and maintain the barricades, and they are happy to tell you (as one told a network correspondent last week) that they could take down the new government, too, if they so chose. You can stop wondering why the provisionals show zero interest in conducting promised investigations into the origins of the violence that toppled Yanukovych. Washington seems to have lost track of that idea, too.

On the other side of the piles of tires, ultra-rightists hold three portfolios in the 18–member provisional cabinet. Yarosh is deputy director of the security council. (I suppose he would be assigned to investigate the violence were anyone to get the job.) It is near to preposterous that Kerry would insist that Moscow officials meet with this man or others like him.

I read Ukraine as a case of what happens when so much of policy, in all kinds of spheres, is conducted in secret. Ordinary citizens cannot see events and are left to judge them blind. And the media are not going to help you. However, there have been notable exceptions to the media’s cooperation in keeping things from us instead of informing.

Earlier this week, Leslie Gelb let loose with a vigorous blast in the Daily Beast, calling on the Americans (and others) to “stop their lies and self-destructive posturing or pay costs they’re loath to admit.” Gelb is a longtime presence in foreign policy cliques — former Times columnist, former State Department official, now president emeritus at the Council on Foreign Relations. The critique reveals a significant breach in the orthodoxy.

Not to root for the home team, but Nicholas Davies just published in Salon an inventory of 35 cases wherein Washington has split the sheets with fascists in the interest of intervention. Read it. Splendidly timed, it demolishes all argument that what is in front of our eyes is somehow not. History so often does the job, I find.

Elsewhere, things go from bad to execrable. Here I have to single out Timothy Snyder, a Yale historian, who froths at the mouth in a three-part blog series published by the New York Review of Books. This guy should be brought up on charges under toxic waste laws.

You get lies: Yanukovych refused to sign the February compromise with his opposition. (It was signed in his office so far as I understand.) You get bent logic: The new cabinet includes three Jews, proving (somehow) it is legitimate. The ultra-right has only three cabinet posts. (Only? That is 16 percent of it. Why any?)

And you get radical miscalculations. Snyder compares Putin with Hitler — unwise given the composition of the government and the barricades people he wants to say are fine. In trying to persuade us that the extremist bit is Moscow’s propaganda, he produces lengths of propaganda, some of it — no other word — extremist.

I carry no hatchet for Snyder, though the Yale professorship causes me to wonder. But in bravely defending every aspect of the Washington orthodoxy, Snyder gives a faithful map of all its fault lines. So it is useful reading, here, here and here, providing you know what you are getting.

Next Sunday Crimeans will vote in a referendum as to whether they wish to break with the rest of Ukraine and join the Russian Federation. The semi-autonomous region’s parliament has already voted to do so, and good enough that they put the thought to a popular vote.

But no. Self-determination was the guiding principle when demonstrators and pols with records as election losers pushed Yanukovych out and got done via a coup (I insist on the word) what they could not manage in polling booths. But it cannot apply in Crimea’s case. The Crimeans are illegitimate and have no right to such a vote.

Simply too shabby. I cannot see how it can hold much longer.

← The Ukraine Delusion: Freedom Over the Economy
John McCain, cranky, warmongering madman, again: Why does the New York Times print these lunatic ravings? →