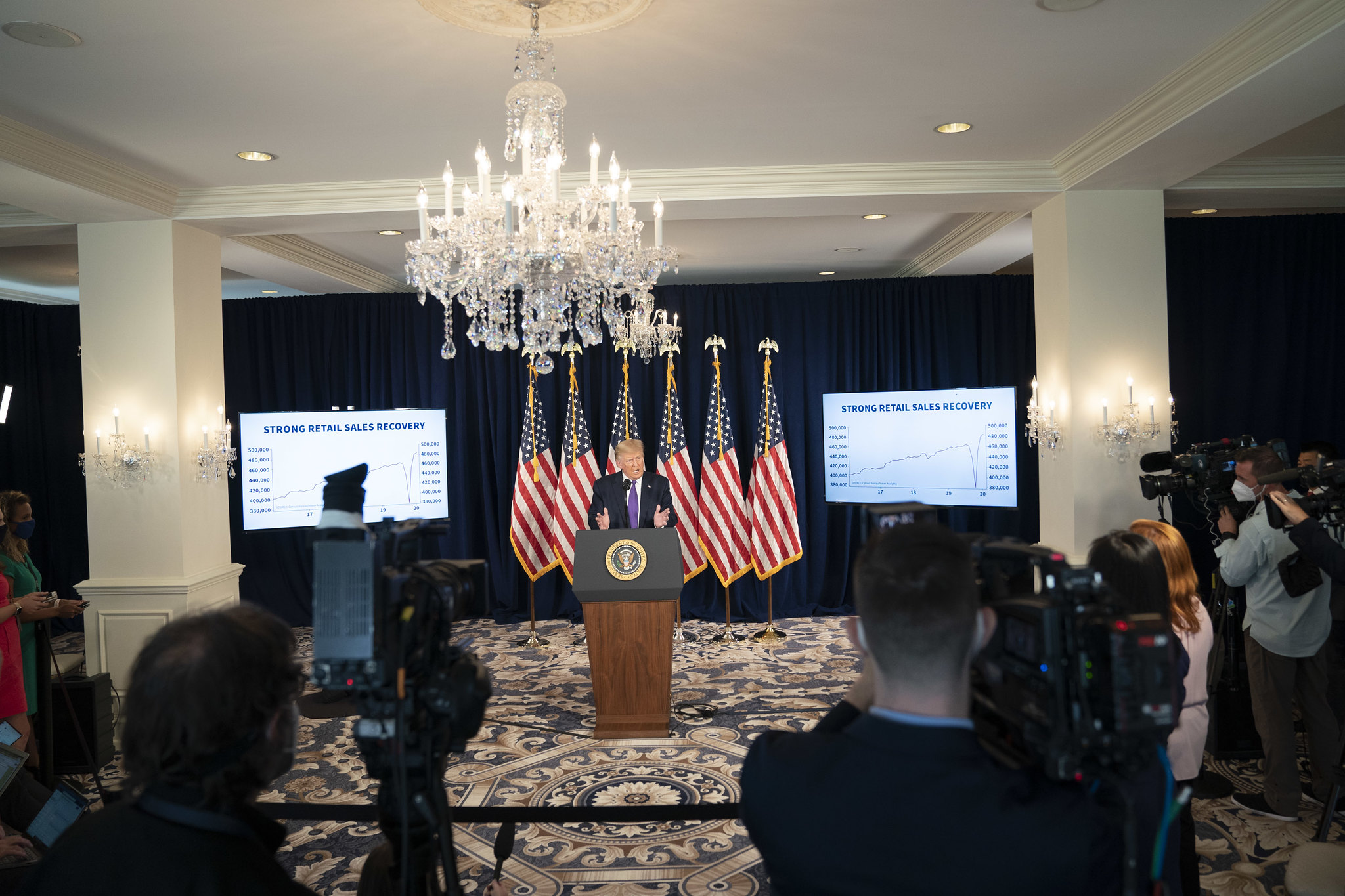 Washington is now committed to preventing any non–Western nations that do not conform to the neoliberal order from rising in any field wherein they threaten to best U.S. companies.

The Trump regime is taking Huawei, Tik Tok and WeChat, three accomplished Chinese technology and social media companies, straight to the wall now, either banning them from the U.S. market or, in the TikTok case, forcing its owner to sell its U.S. assets to an American company. On Saturday President Donald Trump announced that there’s more of this coming.

“We’re looking at other things. Yes, we are,” he said during a White House encounter with reporters. These other things reportedly may include Alibaba, China’s top-performing e-commerce company.

There is always more coming as we follow the exploits of Mad Mike Pompeo, our faux–Christian secretary of state, who is full tilt these days in his persecutory  campaigns against the various Beelzebubs that obsess him, China, Iran, Russia, and Venezuela highest among them.

Why is the regime so busy these days on the foreign policy side? The president, being a man of business, prefers to escalate economic and trade tensions as best he can. Pompeo, whose understanding of anything other than “end times” warfare is limited, can manage no more than his inhumane efforts to starve and threaten those on his list of Satanic evildoers. What is the running theme?

It is time to connect various dots. In the connections we find our answer.

Look at the list: China, Iran, and Russia are all emergent non–Western nations whose steady rise to prominence is already altering the U.S.–led global order, if order is our word; in time they will inevitably play leading roles as it is replaced with what can be properly named a new order. Venezuela is not so far along as these others developmentally, but it belongs on the list nonetheless.

We are treated to all sorts of justifications for American policy against these nations. The Chinese technology companies are threats to national security. The Iranians are state sponsors of terrorism. The Russians are aggressors. The Venezuelans repress their people and the leadership deals in drugs.

Nonsense straight across the board. There is no evidence whatsoever of the Chinese tech companies colluding with Beijing to compromise the U.S. The U.S., not Iran, has sponsored more terrorist groups in the Middle East than you’ve had hot dinners. The U.S. presses hard against Russia’s western flank and calls the Russians aggressive for defending it. The Venezuelan government offers its people a benignly mild iteration of socialism and they welcome it. Utter contempt for the American press, the government-supervised New York Times in the lead per usual, for sustaining these disgraceful, damaging cases of disinformation.

My conclusion: We are entering upon an era when the U.S. (supported in many cases by the more spineless of its Western allies) is actively attempting to suppress non–Western nations that do not bow to U.S. primacy in any field wherein they make themselves genuinely competitive.

If we accept that parity between West and non–West is the No. 1 imperative of our century, as your columnist has severally asserted, confining these nations to the lower rungs on the development ladder has to be judged a losing proposition. It is also dangerous. We can also conclude that the policy cliques in Washington either (1) do not understand the historic turn that is upon us, or (2) they understand this perfectly well but are determined to preserve Western hegemony for a final few decades before a more equitable world order sends it into the history books.

Is it too much to view this as a world war of another kind? I don’t think so. And the implications of this term, if one accepts it, bear serious consideration.

In the interim immediately following the 2001 attacks in New York and Washington, the U.S. had a choice and a chance to accept, imaginatively and creatively, the emergence of a new global order and the West’s relative decline in it after a period of exploitative superiority extending back half a millennium. But our leaders swiftly decided no, we’ll do this as messily and violently as we can.

All of these nations are self-consciously non–Western but in no wise anti–Western. Their sins are the same, too: They all stand for self-determination, against anti-democratic Western hegemony, and for a global order in effect based on the five principles Zhou Enlai articulated at the 1955 Bandung Conference of non­–aligned nations.

Think about these famous principles: Mutual respect for territorial integrity and sovereignty, non-aggression, non-interference in others’ internal affairs, equality, and peaceful co-existence. Name one of these the U.S. observes. Name one that any of the nations on our list violates, and spare us the rubbish about Russia’s re-annexation of Crimea after the U.S. recklessly lunged for the Black Sea naval base at Sevastopol via the coup it cultivated in Ukraine six years ago.

The nations on our list all display strengths, we must also note. These strengths translate into power of one or another magnitude. In this, these nations stand for the emergent power of the non–West. I am happy to call this the power of self-possession.

It is obvious by now that China has achieved a level of technological advancement that will propel it into global leadership in various significant fields. It is a variant of the postwar Japan story: They started out making ceramic ashtrays and transistor radios and went on to dominate in industries such as cars, shipbuilding, steel, robotics, high-end medical gear and so on. For the sake of proportion, Japan had a population of 92 million in 1960; China’s now is 1.4 billion.

Iran is destined to play a leading role in its region in the political and security dimensions regardless of anyone else’s preferences — a positive role given its objective to bring stability to a region the U.S. has set ablaze. It has the world’s fourth-largest petroleum reserves and is a locus of various emergent alliances with other powers, China and Russia notable among them.

Venezuela has the world’s largest oil reserves, of course, and with the election of Hugo Chávez in 1999 it began to make itself that most dreaded of entities from Washington’s perspective, a working social democracy in Latin America that serves its people. These are sources of power. It is because of both that the U.S. is so intent on bringing down the government of Nicolás Maduro, who succeeded Chávez on the latter’s death in 2013.

Vladimir Putin’s great transgression was insisting on nothing more nor less than parity after the U.S. brought the Russian Federation to its knees during the tragic presidency of the supine, ever-inebriated Boris Yeltsin. Since his noted speech at the Munich security conference in 2007, the Russian president has been consistently clear he welcomes extensive, cooperative relations with the West, but only if these are based on an equal partnership.

One need not change a syllable of Putin’s often-stated position to recognize this as precisely the position of all of America’s designated adversaries. But the coming of equality among nations is the single most fundamental reason the U.S. now wages the world war I describe.

It is always an excellent thing for U.S. foreign policy to fail when directed against non–Western powers with minds of their own, especially if it is crafted by the inimitable (thank goodness) Pompeo. Last Friday gave us two back-to-back flops. Wunderbar on both counts.

At the United Nations, the Security Council voted down Pompeo’s long-running effort to extend an arms embargo against Iran as provided for in the 2015 accord governing the Islamic Republic’s nuclear programs. This was embarrassment No.1 for the irrational Pompeo.

And you have to love this: Pompeo now proposes to invoke a “snapback” clause that provides for sanctions to be restored if Iran violates the agreement’s terms —never mind, he says, that the Trump administration repudiated the pact two years ago. When this is rejected, as it is certain to be, it will be embarrassment No. 2.

The Trump regime concurrently announced that it had seized more than a million barrels of Iranian fuels en route to Venezuela. This was supposed to be a bold, chest-out assertion of American power and control of the high seas and its fearless stance against Iran.

Here’s the thing: Iran sold the oil, freight-on-board, well before four Greek-owned tankers set sail with it. Tehran thenceforth had nothing to do with the transaction. It now emerges that the Greek ship owner, George Gialozoglou, had been in talks with Washington for weeks to organize the seizure. I suspect he purchased the fuel precisely to provide the occasion for the U.S. to commandeer it.

When a first cargo of Iranian fuels sailed in late May, Iranian vessels carried it and the U.S. left it alone. The incident last Friday was almost certainly staged for appearances, in sum — embarrassment No. 3 by my count. Mohammad Javad Zarif, Iran’s foreign minister, confirmed this judgment on social media numerous times over the weekend.

I believe Trump when he says there is more coming in his wars without weapons against China. The U.S. is now committed to preventing non–Western nations that do not conform to the neoliberal order from rising in any field wherein they threaten to best U.S. companies. If you can think of a clearer measure of American weakness, please let me know.

When Pompeo was defeated in the Security Council last Friday, Kelly Craft, the regime’s U.N. ambassador, used an interesting phrase. The U.S. will “stop at nothing” to re-impose the embargo against Iran, even if it does so unilaterally, as is likely to prove the case. I believe Craft, too. We should all find those three words fearful as we gaze into the future.

The ship seizure last week was sheer farce, but by way of it the U.S. effectively claims the right to piracy at sea. I do not use “world war” as a figure of speech.