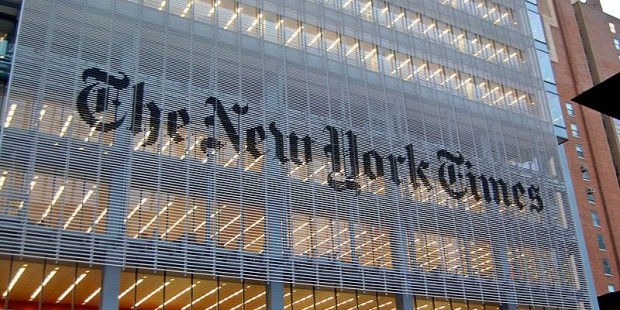 Manipulated by power: What is wrong with the New York Times?

The government is manipulating facts. There’s no credible evidence on Syria. Why is the Times pretending otherwise?

The conflict between democracy at home and empire abroad has beset this nation since the Spanish-American War, a brief interlude of imperial display in the spring of 1898. Empire did not win merely the day: It won the century, the one America named after itself.

Anyone who doubts the thesis can consider it at intimate range as the Obama administration prepares to send missiles into Syria. What we witness in Washington now is no more or less than a scratchy rerun. We must be thankful there is still any such conflict between democrats and those given to imperial reach, however feebly the fight gets fought. It is better than nothing — if marginally, under the circumstances.

President Obama’s announcement last weekend that he would submit his decision to attack Syrian military installations to Congress has been called numerous things. It was surprising. (We have an imperial presidency. Why ask for congressional assent?) It was politically daring. (What if Congress says no?) It was the democratic thing. (“We act better when we are unified,” as Secretary of State Kerry has put it often this week.)

Can something be quaint and frightening at the same time? The thought tempts. The incessant murmurs of patriotism in Washington this week will comfort a few foolish hearts, but they are part of what makes the current scene in our capital disturbing. Cast Obama’s plans for Syria in history and you see how America the ever-changing nation does not change. We have a government manipulating facts. We have hypocrisy of motive: Humanitarian compassion is not the issue; the issues are vanity and the projection of power. We have perniciously misbehaving media, the clerks of the political class at this point (if ever they were other).

This is 1898 redux. Good historians eventually nailed the poseurs, weaklings and paranoids who then pretended to heroism. So take heart: The bunch prescribing cruise missiles for Basahr al-Assad will someday get their revisionists, too.

There is one quite essential difference between our moment and the days when Teddy Roosevelt charged up hills in Cuba. A century and a bit ago Americans were jingoists almost (not quite) to a one. It did not take much other than a few shrieking newspapers, salivating along with TR for brown people’s blood. (It was precisely so.) There was consensus — conjured, yes, but not with much exertion.

Now there is no consensus.

What we watch this week and next is not the manufacture of consent — Noam Chomsky’s phrase, borrowed from Walter Lippmann. That is no longer possible, in my view. It is the manufacture of the appearance of consent, a cardboard cutout of consent. And it is this, consent as spectacle, that is so frightening about our moment. It is this that is about to make the Syria crisis a marker in the road leading down the American slope.

The problem of consent was among Henry Kissinger’s bitter lessons during the Vietnam War. Frustrated with democracy’s necessities (as were several Middle Europeans who came to postwar positions of influence, please note), Kissinger ignored them. The U.S. lost Vietnam (as in Vietnam won Vietnam), and in my view things have never been the same for the producers of consent. More care would be taken, starting with our “embedded” correspondents in Iraq and Afghanistan (an ethical travesty on the part of the press).

One of the telling snippets of the week comes courtesy of Zbigniew Brzezinski, Carter’s secretary of state and another figure with a tin ear for what cannot be said if you want to fool most people all the time. In the Syria case, he observed the other day, apparently innocent of his own drift, “corralling public opinion is proving more difficult.”

It is a fair description of the project. There is no international consent for the White House’s plan to aggress — only the wayward François Hollande hangs on, a foolish try for some lost French greatness. And there is no domestic consent: In the face of the polls, Washington dare not ask for it. So we have all-day-all-the-time consent between the administration and Capitol Hill. And this will have to do by way of “public opinion” and — even better — “national debate.”

When Nancy Pelosi and John Boehner stand shoulder to shoulder, you know you are watching some old Lucy and Ricky Ricardo routine. Pelosi is intent on making a right-of-Reagan policy look Democratic, capital “D.” Boehner has no use for Obama, but he needs to cultivate the conservative hawks to medicate his Tea Party malady.

Yes, there are the recalcitrant among our legislators, the Hamlets. They will come around. Obama has told us he is going into Syria with or without Congress at his back, and he could not say so unless he understood how it all turns out. Any idea that the democratic mechanism is going to stop this bandwagon is what the French call angélisme — a civics teacher’s ideal of how things work.

It comes to a couple of things. First, among the only issues Washington is any longer at one about is the global mission. On other matters we do not know what we are supposed to be — right-wing social democrats (the very farthest we could venture) or Ayn Rand’s acolytes (the other extreme). But nobody tampers with the myth of righteous preeminence. This is a big one. Unless the scales fall from this delusion, America will wreck its chances to do well in the 21st century. Given it is the world versus Washington, more or less, we need look no further than Syria to understand.

Second, and not to postulate any golden age of integrity way back whenever, we are in deepening peril by way of our press. There is simply no air left between power and those who are supposed to be keeping power honest and telling readers and viewers how power works, how power corrupts and how power is to be checked. We are home alone in this respect.

The case for aggression in Syria as we now have it is flimsy to the point of insult. Dennis Kucinich, the former congressman, wrote a fine piece Thursday called “Top 10 Unproven Claims for War Against Syria.” It is all there. We know nothing yet about what happened in Syria. Know as in know, nothing as in nothing.

Mass deception relies on language (also image), and how right Orwell keeps proving to be. It is with words that the press and the broadcasters make instruments of themselves, offering the official case even when there is no case. There are two kinds of words in this regard. There are words written or spoken — a few lies, but mostly a spongy vocabulary chosen to mislead while keeping short of misstatement. Then there are unwritten or unspoken words, just as important. This latter device yields what I term “the power of leaving out.”

A couple of examples among the countless will do. There is the question of evidence supporting the case against Assad. We have been promised evidence for a week. Now read this, from Wednesday’s New York Times. Two reporters are explaining why it does not matter that there are inconsistencies in the “assessments” various espionage services have made of the Aug. 21 attacks near Damascus:

“Still, the very public way that the Americans, French, British and Israelis have felt it necessary to publish their evidence—even where it differs—underscores the huge post–Iraq sensitivities involved in justifying new military involvement …”

Publish their evidence? Did I miss a day’s papers? Also, we know most of this American, French and British intelligence originated with the Israelis, and they have not earned anyone’s confidence. Why are they slipped into this list as if merely one among several? Even Secretary Kerry, when it was convenient to say so a few months back, warned against relying on the Israelis.

Anyway, I root around for the evidence I missed. Then it dawns: It is there in the piece, supposedly. “The Americans give us ‘‘multiple streams of information including reporting of Syrian officials planning and executing chemical weapons attacks,’ code words for intercepts and conversations,” the Times reporters say. (Left out: The intercepts, if there are any, are supplied by Israeli intel.) The British promise “‘the highest possible level of certainty,’” which means lingering uncertainty, and they find “‘a clear pattern of regime use, ’” which does not mean anything.

There are the French and then the Israeli assessments, but the point is plain. Wait not for anything by way of evidence. We will never see any. This is the evidence, believe it or not: descriptions of evidence passed off as evidence. It implicitly equates trust with patriotism, and one cannot go down that road. It leads to Joe McCarthy’s house, among other places.

Second example, and then we shut up shop. No one in the American press will even glance at the idea that the Assad regime may not be responsible for the chemical deployments. We read that the insurgents do not possess chemical weapons of the kind (what kind?) used, and this cannot be said. We read that they could not manage an attack of this scale, and that is misleading. Curiously, we also read (same piece in the Times) that the British admit to finding no logical motive for Assad to have acted as accused, but this is unexplored. And that is the power of leaving out.

Here is our caker for the week, once more from the Times: “Only Russia has argued that it was the rebels themselves who launched the attack — and they have offered no detail to back that claim.”

I suppose if Russia argues something it cannot be right, but there are nearly as many problems here as there are words. The Russians have argued that the insurgents may have perpetrated and that responsibility has to be credibly assigned. They are not alone in this. The Iranians have argued similarly, and so have a lot of people in very nice Western countries, if that is your requirement. Moscow has offered no detail because none is yet available, and all our detail remains speculative.

Footnote: The Group of 20 convenes in St. Petersburg about the time this comment gets posted. Even as emerging economies falter, Syria will be the preoccupation. It would be impossible to scrutinize what gets said too carefully. Midday Thursday New York time, Al Jazeera reported that Russia has sent two destroyers through the Bosporus, joining half a dozen ships floating next to American vessels in the Mediterranean. A faint whiff of the Cuban missile crisis arrives. Perverse thought: Is Putin the one to deliver the dose of reality needed to make Obama stand down?