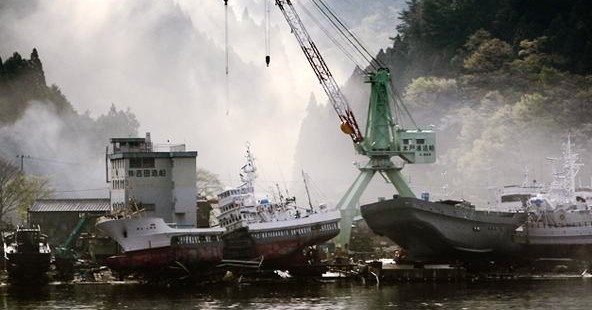 Not quite two months after the earthquake-tsunami-nuclear disaster entered the record books as Japan’s worst tragedy since World War II, the economic picture is becoming clearer. It’s a bigger-than-expected blow for corporations, suppliers, consumers, taxpayers, and many others. In fact, Toyota today announced a 77% drop in profits for its fourth quarter. But while it’s early yet, Japan–as well synced as a Swiss watch–could turn in an impressive performance as it stages a recovery.

The latest from WikiLeaks, published this week, has U.S. diplomats fretting privately that Japan is too structured and risk-averse to manage disasters competently. Considering Washington’s Keystone Kops response to Hurricane Katrina and its plain befuddlement during the Gulf oil spill last summer, there might be something to learn from a nation that responds in unison when faced with natural calamities.

The impact of the disaster on Japan’s economic output is now official. Tokyo announced as April ended that industrial production in March, when the earth quaked, plummeted 15.3 percent from the previous month. This is the steepest decline since a postwar recession in 1953. On the demand side, consumer spending fell 8.5 percent.

Among the carmakers—the blue-chip barometers of Japanese manufacturing—Honda and Mazda just reported their share of the pain. For the first three months of the year, net income at Honda took a 38 percent dive, to $545 million. Mazda had a quarterly loss of $775 million.

The quake and a stronger yen sent Toyota’s fourth-quarter profits tumbling by 77%, with net income for the fiscal year ending Mar. 31 down by $3.58 billion, according to Bloomberg.

These numbers contrast rather sharply with the booming results just in from U.S. automakers. “All these figures indicate a harder hit than we expected,” says Arthur Alexander, a longtime Japan watcher at Georgetown University. “This tells us it’s going to be a long, hard grind.”

It is the grind that is going to be interesting to watch, even if the footage is less dramatic than what we’ve seen this spring. It’s a proving moment for Prime Minister Naoto Kan and his Democratic Party of Japan. The Japanese are still waiting for a grand plan from Kan’s government, and opinion polls suggest that the DPJ, having been in opposition until two years ago, has yet to win public confidence in its ability to respond intelligently, imaginatively, and effectively.

But it is starting to get some things right in all three categories. Kan named a well-diversified reconstruction committee several weeks ago—a quick, smart move—that has already determined that recovery projects should be decentralized, locally hatched plans rather than imposed from the upper reaches of the Tokyo bureaucracy. This is typical of Kan—a grassroots man his whole career—and a considerable shift from established Japanese practice.

Last week the government passed its first recovery budget—a 4 trillion yen ($49 billion) package that will go toward clearing wreckage, housing for the 100,000–plus Japanese now without homes, rebuilding the local fishing industry, and support for damaged businesses. We should watch how efficiently these funds are dispersed. (And, one hopes, they’re watching in Louisiana.)

Kan’s government now has two questions in front of it, and it has already engaged both, which is encouraging. The bill just passed is understood to be a down payment on the full cost of reconstruction, so how is it going to cover the total tab? Second, is it going to be able to overcome Tokyo’s traditionally partisan politics—which nowadays resemble America’s—and gain the cooperation of the Liberal Democrats, who are still smarting from their defeat at the polls two years ago?

Horse-trading is no one’s strong suit in Tokyo. The political scene more closely resembles sumo wrestling: You’re either in the circle or out of it, and neither the “ins” nor the “outs” ordinarily have much to say to one another. But remember: A goodly proportion of the DJP’s legislators are refugees from the sclerotic Liberal Democrats; they’ve got many old friends on the other side of the aisle.

So far the LDP is proving recalcitrant: On Tuesday its legislators refused to join Kan’s Reconstruction Design Council. But they can play politics with the recovery process for only so long. A credible scheme for rebuilding northeastern Japan will be difficult, if not impossible, to oppose. The LDP is thus testing the Kan government’s technocratic capacities, but the composition of his council—a good mix of scholars, corporate execs, local leaders, journalists, NGO mavens, and other experts—gives Kan a solid chance of overcoming Tokyo’s traditional absence of bipartisanship in force majeure fashion

The government will also have to decide whether the Bank of Japan should enlarge its asset-purchasing program and/or issue reconstruction bonds. The central bank  has so far obligingly reaffirmed its “ZIRP,” the zero interest rate policy that has been in place for years, and it has signaled publicly (an unusual move for the BOJ) that it is considering putting $60 billion more into the asset-purchasing program, now set at slightly less than $500 billion.

The bureaucrats and the pols, then, are paying attention. Outside of government, it is hard to see how anyone can fail to be impressed by the way people and companies are pulling together. Executives and bankers are setting up NGOs in their home villages, corporations are lending employees to help rebuild the factories of their suppliers, and electricity conservation has been effective beyond the most optimistic predictions a month or so ago.

As those obnoxious diplomatic cables WikiLeaks just “outed” confirm, many Westerners have a way of looking across the Pacific and seeing one degree or another of incompetence and inefficiency in the way Asians go about things. I see just the opposite: Japan is by any measure among the world’s best-administered nations, and the early signs are that this will serve it well as it gets back on its feet.

With a  recovery now starting to take shape, it is perhaps instructive to recognize that different traditions brings forth different ideas about the role of the state in national life—and a different notions of where the limits of cooperation lie.

← Chinese Democracy-Catching a Moving Target
Is What’s Good for GM, Good for China? →