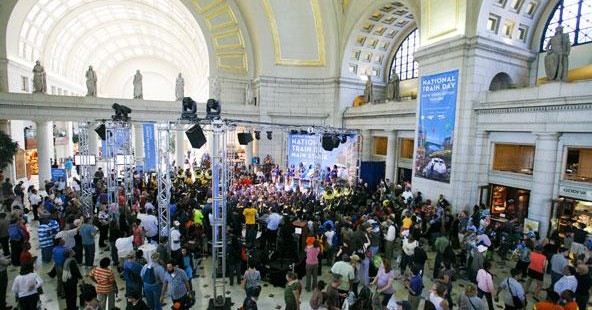 How to Put a Dent in Deficits—and Make Real Money

The federal government and almost all 50 states are constantly searching for solutions to gaping budget deficits. And U.S. corporations are sitting on piles of cash estimated at around $2 trillion. So is there some mutually beneficial intersection here?

If public-private partnerships, or PPPs (or P3s) don’t come to mind, they should. No, they’re not going to solve all of America’s fiscal woes. But they can help put a dent in deficits.
PPPs are contractual arrangements by which a public agency and a private company combine to invest and share the risks and rewards of a public-sector project, whether it is a bridge or a hospital or a water system. They are different from privatizations in that the government side continues to set the goals for the project and retains oversight authority. It also owns the asset in most cases.

Anyone who has arrived or departed from Union Station in Washington, D.C., over the past 25 years has had an unguided tour of a PPP in action. With declining rail traffic, the place was shut down in 1978 and slated for demolition. Three years later Congress passed the legislation needed to make it a PPP. It cost $160 million: $70 million from Amtrak, $40 million by way of a bond issue, and $50 million in private equity.

Now look. Amtrak took 100,000 square feet of office space for its national headquarters, and 120 shops, restaurants, bars, and what-have-you occupy 210,000 square feet of retail space. To this columnist’s eye, an extraordinary piece of public architecture now looks a bit too crammed with commerce. But this is a minority view to say the least: The place works.

A lot of people in a lot of states seem to think it’s time to consider such public-private arrangements as one solution to our collective budgetary problems. “We’re not talking about private-sector philanthropy,” says Richard Norment, executive director of the National Council for Public Private Partnerships, the Arlington (Va.) flagship organization in the field. As Norment stresses, the payback in deficit terms is indirect. “They’re a way of utilizing budgetary funds more effectively. They help governments leverage what money they have.”

Tampa Bay, Florida, offers another example. To meet demand for fresh water, the municipal water authority turned to a new (and initially expensive) desalination technology called reverse osmosis. An American–Spanish joint venture assumed all the risk, and the city has been operating a $200 million water- producing plant since 2007.

The plant is owned by the municipal water authority. The joint venture is paid per gallon of water delivered and makes money. It’s a bit more expensive than ground water, but the key factor is that the project produces a revenue stream that serves the private side, while the city government is able to meet local demand for fresh water.

A lot of people in a lot of places seem to be thinking this over now.  Arizona enacted a new law earlier this year allowing for public-private partnerships in road, bridge, and highway construction. There’s a PPP bill on the governor’s desk in Illinois even as we speak. Arkansas introduced enabling legislation this year.

The list goes on. In June, New Jersey Governor Chris Christie announced plans for a PPP that would run some of the state’s public schools. Indiana and California are expanding existing laws to liberalize the use of PPPs, and Maryland, Michigan, Montana, Ohio, and Nevada are all considering the concept. A bill is due to be sent to the New York State Senate this autumn.

“In the last six to eight months the amount of activity in this area is substantially greater than I’ve ever seen before,” Norment says.  “I call it a legislative stampede.”

Legislation is key because all states regulate their procurement policies (as does the federal government). Typically, the regs are based on a design-bid-build formula: A state agency is mandated by law to design its projects, put them out for bids, and give the job to the contractor with the lowest responsible bid. Good PPPs are different. They’re based on value-for-money, and that is not necessarily the lowest bid; they also allow the contractor more flexibility in the project than the standard formula. The best of them are based on stakeholder interests, too, bringing labor over to their side. So far, 31 states have made this intellectual leap.

Nonetheless, nobody knows how many PPPs are now operating in the U.S. because most are done here and there at the state level. And some projects that may seem obvious candidates are out of the question: Amtrak has no chance of generating the revenue stream a successful PPP needs; Medicare is simply too political a matter, though health care-related partnerships are not uncommon.

Norment reckons Virginia is the likely leader in the field. It started with transportation projects in the 1990s and now has PPPs in water systems, landfills, courthouses, schools, and other such projects—Norment estimates about 500 in all. Part of the state’s inspiration was a failing institution in Washington called the Oyster School. It allowed a developer to put up a 212-unit apartment building on vacant acreage, and in return for a 30-year tax waiver, the developer built a new school.

The U.S. is nothing like the world leader in this field—a curious thing to contemplate given the country’s desperate debt situation at both state and federal levels. The European Union has about 1,400 PPPs, the first of which arose in Britain in the early 1990. Even more curious, the world leader in PPP experiments is India.

Why India? It seems to have made a conscious decision to lift itself from “developing nation” status to “emerging economy,” and the only way it could do so was to utilize all available resources. By the late–1990s, India was an experimental lab for imaginative partnerships between public and private investors. It now has PPPs in highway construction (a notable success), water, rails, school construction, ports, and more or less any other kind of public infrastructure you can think of.

My theory is that India has enjoyed a certain ideological independence since it became a nation in 1947. The economy has always been a mix of socialism and gradually liberalizing capitalism. Having reported on India’s PPPs during the last decade, I’m convinced that a sort of intellectual flexibility is at work: A project is neither state nor private; it’s a public service but also intended to make money, and its ingredients have been borrowed from any number of other efforts the Indians have studied.

Europe was quick to see the advantage of PPPs over privatizations—the government retains control of a project’s goals and operations oversight—and the European model got off to fast start. But it soon ran into trouble. It was based on what the British called PFIs, private financing initiatives, and PFIs have a structural problem: They saddle the government with a lot of long-term debt because the state has to repay investors, and long-term debt is not exactly flavor of the month in Europe these days.

In come-from-behind fashion, the U.S. appears to be accelerating its use of PPPs just as Europe is losing interest in its PFI formula. The difference is evident at Union Station, the Oyster School, and most other successful American tries at PPPs. They frequently involve an underutilized asset; once it is rejuvenated, the asset generates a revenue stream that pays down debt—leaving government budget-keepers free to apply what funds they have elsewhere.

This seems to be the big plus of the American model. But it is also a limitation: Not all social services or infrastructure projects are going to produce that income stream, and without it, PPPs are often not winners. Most experts in this field reckon that 20 percent to 25 percent of the (countless) infrastructure projects now in need of funding in the U.S. will fit the model.

“It’s a useful tool, and we should be able to do them when they’re right,” says Robert A. Dennison, who just stepped aside as chief engineer for the state of New York. “Is it the silver bullet? I don’t think so.”