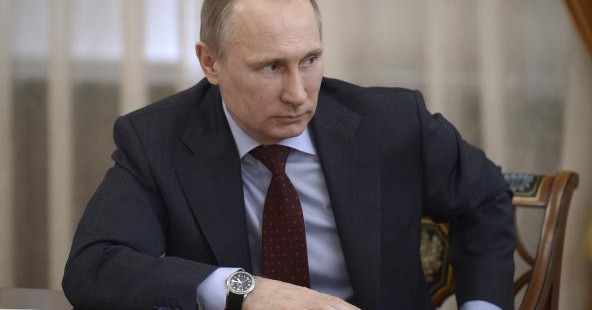 Whatever anyone may think of Vladimir Putin, there is no longer any denying his mastery of statecraft. The Russian president’s gifts for surprise and exploiting the mistakes of those set against him, evident all along in the Ukraine crisis, now start to look positively perverse: He has just pulled off one of his more dexterous end runs.

Just as Washington and the European powers reached high decibels in their denunciation of Moscow’s takeover of Crimea, Putin picked up the telephone last the weekend, reached President Obama in Riyadh (where he was attending to another foreign-policy mess), and said roughly, “I want my people to talk to your people.”

Related: Intelligence Head Fears Putin Has His Eye on Armenia

In an instant, the tough Russian has changed the equation in Ukraine—stealing the ball from Obama and Secretary of State Kerry as he did in Syria last year and as he did, indeed, in his bloodless move into Crimea.

No matter. The ball is still in play. If Obama and Kerry are smart enough—and this has to be an “if,” given their record on the foreign side—they will recognize that reconnecting diplomatically now holds more promise than the line-in-the-sand sanctions route, which was always destined to deliver limited returns and is already starting to peter out.

Both sides stand to gain now that Putin and Obama have had words. The flip side is that both will have to acknowledge realities they have until now resisted.

Related: How Vladimir Putin Is Remaking a New World Order

The Russians.  Putin has secured Crimea for the Russian Federation, and it is folly to pretend there is any chance he will turn back his clock. The crisis has also brought clearly to the fore the considerable extent of pro-Russian sentiment in the eastern and southern portions of Ukraine.

But this is not enough to carry the day. It is also obvious now that Ukraine is genuinely divided in its geopolitical preferences, and the Western-tilted part of its populace can be neither ignored, contained, nor dismissed.

Putin enjoyed a favorable settlement while the now-deposed Viktor Yanukovych held the presidency in Kiev. Those days are over; another deal, one with a lot more European coloring to it, will now define Putin’s next-door neighbor to the southwest.

This is the big one for Vlad. Realities of similar magnitude await Washington and the European allies.

Related: Does Putin Want to Carve Up Ukraine and Take the Spoils?

First, Western powers will have to drop their compulsive suspicion of all things the Russians do. It reflects thinking that has bounced between wariness and paranoia since the mid–19th century when “the West” emerged as a political construct in Europe in response to the rise of Czarist power from the reign of Peter the Great onward.

Getting past a kind of hostility on autopilot is essential to all future dealings with the Russians if we are to avoid what now threatens to become Cold War II. In the case of Ukraine, it means listening and watching at the same time.

Putin has 40,000 troops ranged across his frontier with Ukraine. These troops do not contradict Putin, Foreign Minister Sergei Lavrov, and Vitaly Churkin, his UN ambassador, when they say Russia has no intention of entering Ukraine unless it is threatened by events. The U.S. army now plans to run exercises on Ukrainian soil in July—sooner, if some respected analysts are heeded. Would Washington behave differently if Putin scheduled maneuvers in, say, the Yucatan Peninsula?

The Western allies. Two games of pretend have run their course. One, the Europeans and Americans have to drop the pretense that they were innocent bystanders as the Ukrainian crisis unfolded. Jack Matlock, a former ambassador to Moscow, explained this case as well as anyone in a recent conversation with Churkin and others.

NATO’s eastward expansion after the Cold War, to put a complex case simply, disturbed Russia from the first; in the West, critics from George Kennan to Tom Friedman have judged it ill advised and provocative. Ten nations in the old Soviet orbit are now members; Ukraine was to be No. 11—except that it is where Putin has drawn the line Matlock, Kennan, and many others have long anticipated. There is no more time for flinching from this reality.

Two, the composition of the forces gathered against Yanukovych was complex, certainly, but the presence of right-wing extremists given to atavistic anti–Russian agitation is another cat too far out of the bag. Some of these people, notably Dmytro Yarosh, leader of the ultra-nationalist Right Sector, are now in the provisional government— Yarosh as deputy director of the security council.

Militant factions remain in Independence Square, and it is a good question why. Wearing ski masks and armed with clubs and axes, they surrounded parliament over the weekend and threatened to storm it in response to the death last week of a Right Sector militant as police tried to arrest him.

These guys have a worrisome relationship with the interim regime. Will we now watch the spectacle of Yarosh running the official investigation into the shooting of a comrade?

Plainly, Putin and Lavrov’s refusal to negotiate directly with the provisional government can no longer be dismissed so flippantly as the Obama team has until now assumed.

To his credit, Kerry has already revived his warm relations with Lavrov in search of a new deal. In my view, they will not be able to dance around the reality that spheres of influence, while remnants of a world order the community of nations is outgrowing, must still figure in policy even as they are not precisely respected.

I take the State Department’s word that a deal is not imminent, despite Moscow’s hints otherwise. Kerry holds to the position that Moscow has to negotiate directly with the provisionals and that Crimea is still on the table. Realistically, Crimea is off the table. As to the provisionals, Lavrov calls talks “absolutely unacceptable,” and it is time to call a coup a coup, acknowledge he has an argument, and develop another approach.

Lavrov and Putin are pushing for a reinvention of Ukraine on a federalist model of a kind previously explored in this space. While it would hold the nation together and accommodate differing languages, ties, and political preferences, it would leave Ukraine sufficiently decentralized to weaken its voice in international affairs—an obvious advantage for Putin.

This leaves Washington and the European capitals in a spot. A federalist Ukraine would be of modest interest to institutions such as NATO. The question becomes, what is the priority? The continued advance of the Western alliance eastward or the making of a nation capable of reflecting its eternal complexities?